Were platypuses just the beginning?

In October, researchers reported that the already perplexing animals fluoresce a psychedelic blue-green color under black light. The species joined a short list of mammals known to do this, including opossums and flying squirrels.

Since the study came out, others have begun their own investigations, mostly in Australian mammals. Although results are preliminary, the findings suggest we may have to book a larger venue for the mammal rave.

When he heard about the platypus discovery, Kenny Travouillon, curator of mammals at the Western Australian Museum, borrowed a black light lamp from the arachnology department. (They normally use the lamps to find scorpions, which also fluoresce.)

After confirming that their preserved platypuses glowed, he and his colleagues moved on to the rest of the collection. “We just went around for a bit of fun,” he said. “Putting the torch on all of them and let’s have a look.”

This was only a first pass. Fluorescence occurs when pigments in certain materials absorb ultraviolet rays, which are usually invisible to people, and re-emit them as colors that we can see. Black light lamps and flashlights soak these pigments with UV rays and cause them to glow — but they often emit visible light as well, which can muddy the waters. More rigorous studies involve filtering out this visible light, and measuring the fluorescence’s true strength and color.

But what they saw was encouraging. Bilbies — endangered marsupials with long snouts and rabbit-like ears — had orange and green accents. The quills of hedgehogs, porcupines and echidnas shone bright white, as if dipped in correction fluid.

Some specimens were more reserved: Of two wombat species they examined, only one fluoresced, and “kangaroos didn’t seem to do very much at all,” Dr. Travouillon said. The museum plans to team up with a nearby university to do a more systematic study, with better equipment, early next year.

Live animals are also being tested.

When a co-worker told Jake Schoen, a conservation technician at the Toledo Zoo the platypus news, “we got pretty excited about it,” he said. He had already modified a camera to photograph fluorescence for another project. After checking out the zoo museum’s own preserved platypus specimen, Mr. Schoen next turned his lens on the Tasmanian devils, Spiderman and Bubbles.

“The tricky part was having them sit still for a fraction of a second,” he said. Eventually, Bubbles cooperated. When the UV flash went off, voilá: A cool blue glow emerged around her eyes, at the bases of her whiskers, and inside the cups of her ears.

“Presumably all of its skin is fluorescent,” Mr. Schoen said. The portrait he captured looks a bit like a velvet painting. Preserved Tasmanian devils at the Western Australian Museum glowed in a similar way, Dr. Travouillon said.

What do the scientists who found that platypuses glow think? “These observations are exciting,” said Erik Olson, an associate professor of natural resources at Northland College in Ashland, Wis., and one of the authors of the platypus paper. “I encourage folks to document such observations of biofluorescence within the scientific literature so that others can build upon their work.”

Others say it’s easy to read too much into these findings. 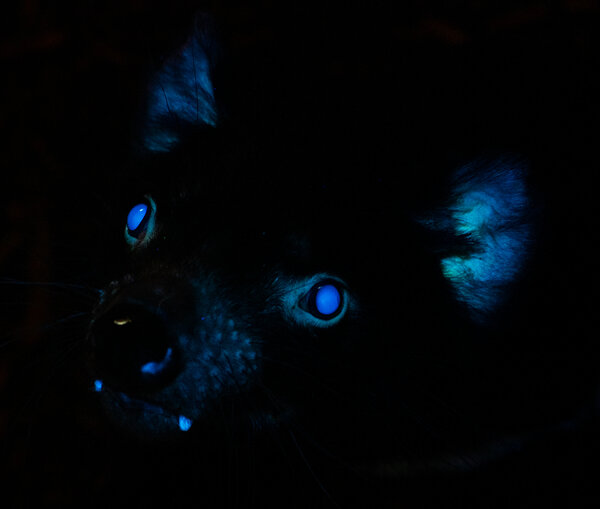 While looking at photos of animals with Day-Glo fur or skin gives the impression that perhaps they appear this way to one another, that’s very unlikely, said Michael Bok, a visual systems biologist at Lund University in Sweden who was not involved in any of this research. “It would be incredibly surprising,” he said, if these animals “could make out these fluorescent patterns in any sort of natural lighting environment.” He compares it to human fingernails and teeth — biological materials that also fluoresce, to little fanfare or avail.

In a 2017 paper, two biologists reviewed hundreds of known examples of fluorescing birds, plants, crustaceans and other organisms, and found only a few cases where these patterns might play a role in camouflage, mate attraction or other behaviors.

Mr. Schoen and others at the Toledo Zoo hope to work with contacts at the Save the Tasmanian Devil Program to potentially “tease out whether or not this is actually an ecologically adaptive trait,” he said.

In the meantime, he is heartened that his photo has increased public interest in Tasmanian devils. Some people have written online that they “didn’t even know that it was a real animal,” he said.

Its fluorescence “may just be a coincidence,” he said. “But it’s certainly a lot of fun.”