Moon rocks collected by China’s Chang’e-5 lander do contain water, a new study has confirmed, but not as much as scientists expected.

They found that the lunar soil had levels of H20 around 28.5 parts per million (ppm), which is relatively dry, even by the moon’s standards.

But within the sample the researchers found that the mineral apatite had a water content of up to 179ppm.

This confirms earlier findings from Earth-based telescopes, satellite observations in orbit and local data from Chang’e-5 itself.

The lander arrived on the moon on December 1, 2020, as part of a mission to return samples of rock and soil to the Earth, which it achieved two weeks later on December 16 that year. 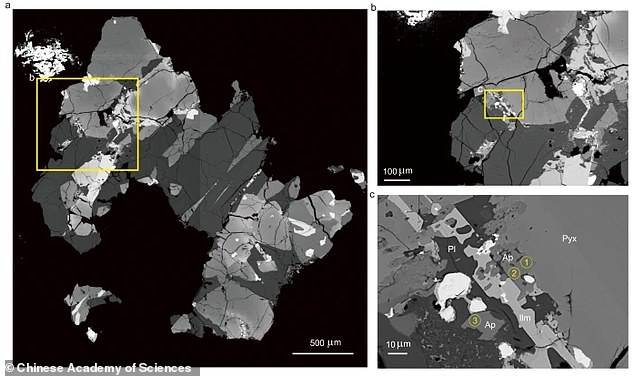 Discovery: Moon rocks collected by China’s Chang’e-5 lander do contain water, a new study has confirmed, but not as much as scientists expected. Within the sample the researchers found that the mineral apatite (pictured) had a water content of up to 179ppm

The lander arrived on the moon on December 1, 2020, as part of a mission to return samples of rock and soil to the Earth, which it achieved two weeks later on December 16 that year. It took samples from the area marked in red above

HOW WILL ASTRONAUTS EXTRACT H2O FROM MOON ROCKS?

Engineers for the European Space Agency have successfully shown how water and oxygen can be extracted by cooking up lunar soil.

The set-up uses a two-step process, well known in industrial chemistry for Earth-based applications, that has been customised to work with a mineral mixture that mimics lunar soil.

In the experimental set-up, the soil is vapourised in the presence of hydrogen and methane, then ‘washed’ with hydrogen gas.

Heated to temperatures of around 1,000 degrees Celsius, the minerals turn directly from a solid to a gas.

Gases produced and residual methane are sent to a catalytic converter and a condenser that separates out water.

Oxygen can then be extracted through electrolysis.

The solid by-product is rich in silica and metals that can undergo further processing for other resources useful for in-situ exploration of the moon.

But while on the moon, Chang’e-5 used its on-board instruments to take a number of scientific measurements, including the spectral reflectance of moon rocks.

This is a process where light reflected from the rocks can indicate their chemical make-up, including levels of molecules such as oxygen and hydrogen.

Analysis by a separate Chinese team of scientists published earlier this year showed that in some types of rock, at a mid-latitude on the moon, molecules of water were present at about 120ppm, and others at 180ppm.

Many orbital observations and sample measurements completed over the past decade have shown water exists — as either hydroxyl or H20 in moon rocks.

However, no measurements have been conducted on the lunar surface itself, to determine, close up, whether the molecules are actually in the rocks.

It is hoped that astronauts living on the moon in the future will be able to extract the molecular oxygen and hydrogen, to produce water and pure oxygen.

In the new study, a team of researchers at the Chinese Academy of Sciences analysed Chang’e-5’s samples and found signs of water bound up in their mineral structure.

Parvathy Prem, of Johns Hopkins University in Maryland, who was not involved with the research, said the amount of water observed was ‘kind of on the low side of what we would have expected before the mission’.

It is thought that this may either be because Chang’e-5 took the samples at a warm time of day, or due to the lunar craft landing in an area protected from the solar wind by Earth’s magnetic field.

The wind contains hydrogen that can become water when it meets oxygen atoms on the moon’s surface.

‘This work is analysing a few scoops from a very particular location gathered under particular circumstances, but this is an important part of the bigger picture,’ Prem told the New Scientist.

It is not yet clear whether this mineral-bound water could one day be used by humans on the moon.

‘You would need to process quite a lot of soil to get water out of it,’ Prem said.

‘Just in terms of the quantity, even the wettest lunar soils are drier than the driest desert on Earth, so we’re talking about really small quantities of water. But water, especially beyond our planet, is precious.’

The new study has been published in the journal Nature Communications.