It’s the MooLoo! Scientists successfully ‘potty-train’ cows to urinate in a specially adapted toilet that would capture waste and cut greenhouse gas emissions

Scientists have succeeded in potty-training cows — getting them to urinate in a specially built toilet — in a move that could help curb greenhouse emissions.

When cattle are allowed to graze and relieve themselves freely, the release of their bodily waste can lead to the contamination of local soil and nearby waterways.

And while this problem can be controlled by confining cows to barns, the accumulation of urine and faeces in close quarters can produce ammonia instead.

Leaching into soil, ammonia can be converted by microbes into nitrous oxide — one of the top three greenhouse gases after carbon dioxide and methane.

In fact, agriculture is the largest source of ammonia emissions, with livestock farming accounting for more than half of this contribution.

In their study, experts from Germany’s Research Institute for Farm Animal Biology designed a toilet for cows that can collect ammonia so it can be treated.

By teaching calves to use this ‘MooLoo’, the team say that it will be possible to both reduce greenhouse gas emissions and create more open, animal-friendly farms. 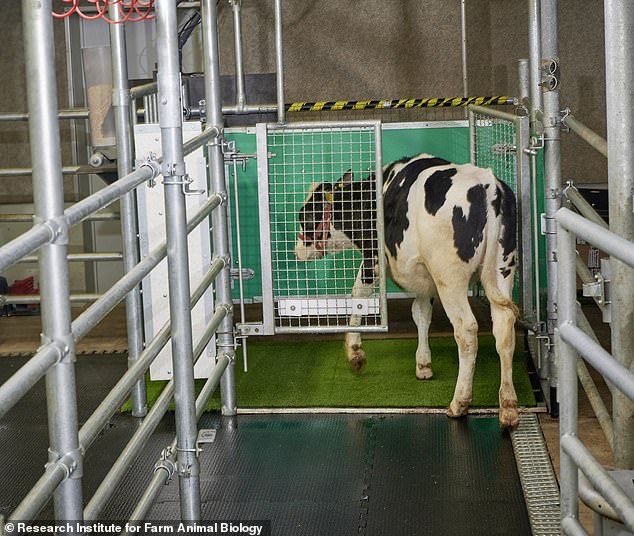 Scientists have succeeded in potty-training cows — getting them to urinate in a specially built toilet — a move that could help curb greenhouse emissions. Pictured: a calf enters the MooLoo

WHAT IS AMMONIA AND HOW DOES IT BECOME A GREENHOUSE GAS?

Ammonia is a colourless gas with a distinct odour.

It is a building-block chemical and a key component in the manufacture of many products people use every day.

It occurs naturally throughout the environment in the air, soil and water and in plants and animals, including humans.

The human body makes ammonia when the body breaks down foods containing protein into amino acids and ammonia, then converting the ammonia into urea.

Ammonium hydroxide — commonly known as household ammonia — is an ingredient in many everyday household cleaning products.

Ammonia is a basic building block for ammonium nitrate fertiliser, which releases nitrogen, an essential nutrient for growing plants, including farm crops and lawns.

But by leaching into soil, ammonia can be converted by microbes into nitrous oxide — one of the top three greenhouse gases after carbon dioxide and methane.

‘It’s usually assumed that cattle are not capable of controlling defecation or urination,’ said paper author and animal psychologist Jan Langbein of the Research Institute for Farm Animal Biology in Dummerstorf, Germany.

However, he explained, his team challenged this thinking.

‘Cattle, like many other animals, are quite clever and they can learn a lot,’ he said.

‘Why shouldn’t they be able to learn how to use a toilet?’

To toilet train the calves, the researchers started by rewarding the animals with a sugar treat every time they urinated in the special latrine.

The next step involved allowing the calves to enter the toilet enclosure from the outside when they needed to relieve themselves.

‘You have to try to include the animals in the process and train the animals to follow what they should learn,’ explained Dr Langbein.

Alongside the positive reinforcement, the team also set out to discourage the calves from urinating outside of the MooLoo.

‘As a punishment we first used in-ear headphones and we played a very nasty sound whenever they urinated outside,’ said Dr Langbein.

‘We thought this would punish the animals — not too aversively — but they didn’t care!’ he added.

‘Ultimately, a splash of water worked well as a gentle deterrent.’

Over the course of just a few weeks, the team succeeded in training 11 out of the 16 calves involved in the experiment to use the MooLoo — with the animals performing as well, if not better than, young children learning to use the toilet for the first time.

Dr Langbein said that, with further training, he is optimistic that this success rate could be further improved.

‘After ten, fifteen, twenty years of researching with cattle, we know that animals have a personality, and they handle different things in a different way,’ he said.

‘They are not all the same.’ 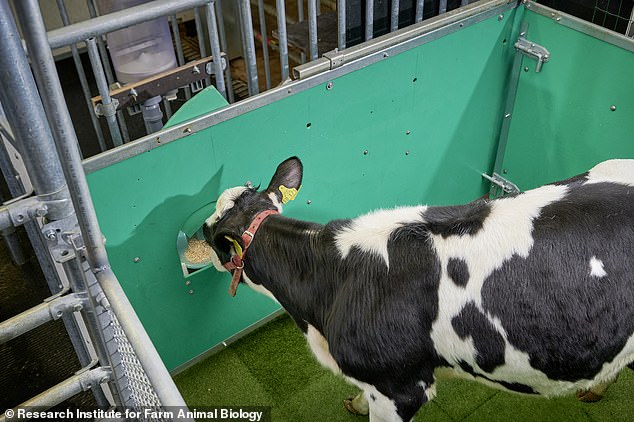 To toilet train the calves, the researchers started by rewarding the animals with a sugar treat (pictured) every time they urinated in the special latrine. The next step involved allowing the calves to enter the toilet enclosure from the outside when they needed to relieve themselves 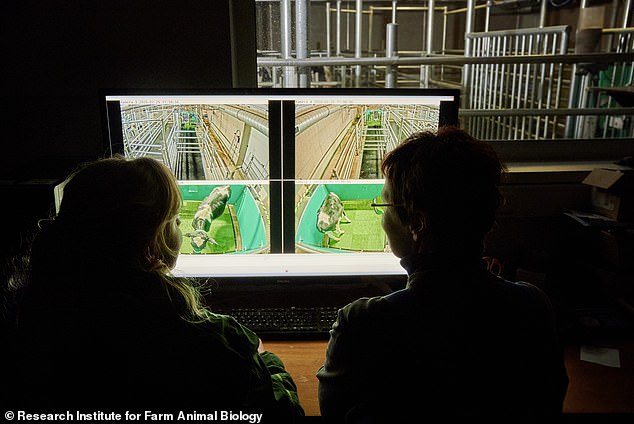 Over the course of just a few weeks, the team succeeded in training 11 out of the 16 calves involved in the experiment to use the MooLoo — with the animals performing as well, if not better than, young children learning to use the toilet for the first time. Pictured: the researchers monitor the progress of the calves’ MooLoo training

With their initial study complete, the team are now keen to transfer what they have learnt in their tests to real-world cattle housing and outdoor systems.

‘In a few years all cows will go to a toilet,’ Dr Langbein predicted.

THE ENVIRONMENTAL IMPACT OF FARMING COWS

The livestock animals are notorious for creating large amounts of methane, which is a major contributor to global warming.