Hole-y moly! Milky Way could have a dozen rogue supermassive black holes prowling within it, consuming everything in their wake — but the chance Earth will encounter one is ‘vanishingly small’

A dozen rogue supermassive black holes may be prowling around the Milky Way, consuming everything in their wake, a study has proposed.

Researchers led from Harvard University simulated the formation and movement of supermassive black holes over billions of years of universal evolution.

They found that black holes primarily go rogue when their host galaxy collides with another, typically larger, galaxy — and knocks the hole from its central spot.

And the more massive a galaxy is, the more wandering black holes it is likely to have picked up — with galactic clusters having the potential to harbour thousands.

He added: ‘Space is so vast that even when two galaxies containing hundreds of billions of stars merge together, their stars do not collide.’

Also, fortunately for us, most rogue black holes eventually end up merging with the supermassive black hole at the centre of their new galaxy.

This means that those that remain — for example, in the Milky Way — tend to be way out in the galactic halo, far away from the location of our solar system.

‘If there really were a supermassive black hole right in our vicinity, we would be able to detect its presence from the motions of nearby stars,’ Dr Ricarte added. 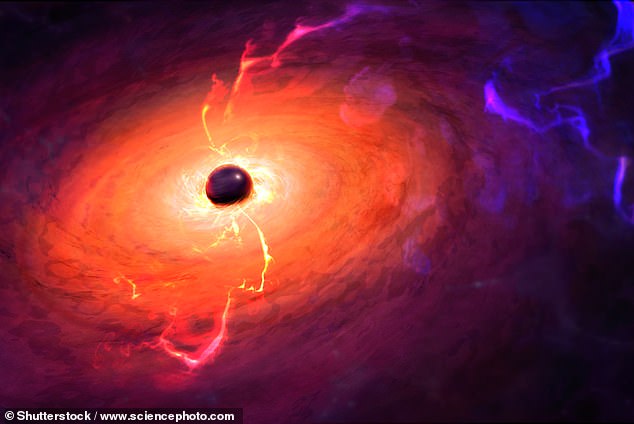 A dozen rogue supermassive black holes (like depicted) may be prowling around the Milky Way, consuming everything in their wake, a study has proposed 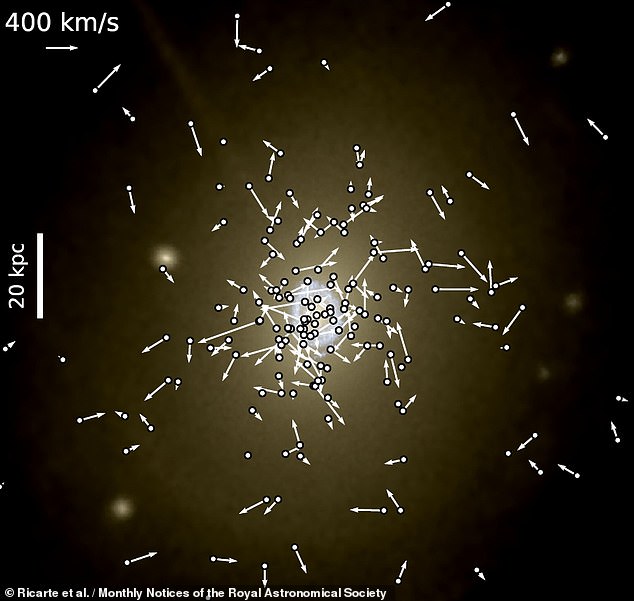 The more massive a galaxy is, the more wandering black holes it is likely to have picked up — with galactic clusters (like that pictured) potentially harbouring hundreds-to-thousands

While regular black holes — those that form from the collapse of stars — typically have masses ranging from 5–20 times that of the sun, their supermassive counterparts can be millions or even billions of times heavier.

Supermassive black holes are usually found at the hearts of galaxies, acting as anchors for the swirling mass of gas, dust, stars, planets, and other bodies around them. The Milky Way, for example, revolves around one called Sagittarius A*.

However, there are circumstances that can see these supermassive black holes knocked loose from their usual spot and end up wandering free — such as can occur in the wake of a collision between galaxies.

In their new study, Dr Ricarte and colleagues ran a series of so-called ‘ROMULUS’ cosmological simulations to track how the paths of wandering black holes might behave over billions of years.

At the start of each simulation, supermassive black holes were seeded based on the local gas conditions — with the bodies forming where the gas was metal-poor, dense (15 times that of the threshold to form a star) and warm (at 9,500–10,000 Kelvin).

These parameters equal those proposed to have formed so-called ‘direct collapse’ black holes back when the Universe was young — only some 100–250 million years old. (It is believed that it has now passed its 13.77th billionth birthday.)

In the simulation, this lead to wandering black holes with a mass of around one million times that of the sun. 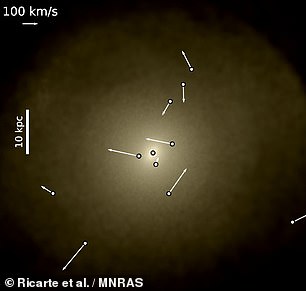 In their new study, Dr Ricarte and colleagues ran a series of so-called ‘ROMULUS’ cosmological simulations to track how the paths of wandering black holes might behave over billions of years. The team found that the majority of rogue black holes in a galaxy came from the centre of small, satellite galaxies that collided with their larger host — knocking the massive body free from its prime position. Pictured: a galaxy around the mass of the Milky Way has 15 rogue black holes (left), while one with a tenth of the mass has only two wanderers (right)

The team found that the majority of rogue black holes in a galaxy came from the centre of small, satellite galaxies that collided with their larger host — knocking the massive body free from its prime position.

Furthermore, the number of wandering black holes in a given galaxy tended to increase linearly with the galaxy’s mass, with the Milky Way likely to have around 12 — but larger galaxies and clusters bearing more.

‘We expect thousands of wandering black holes in galaxy cluster haloes,’ the researchers wrote in their paper.

‘Locally, these wanderers account for around 10 per cent of the local black hole mass budget once seed masses are accounted for.’

In fact, the researchers said, in some early galaxies — around 12 billion years ago — wandering supermassive black holes may even have outweighed and outshone their galactic-centre counterparts.

However, as time passed, many of these rogue black holes would have merged, or been absorbed into the supermassive black hole at the centre of their new host galaxy — after first forming binary pairs as they slowly fell into each other.

‘ROMULUS predicts that many supermassive black hole binaries form after several billion years of orbital evolution, while some […] will never make it to the centre,’ the researcher explained.

‘As a result, Milky Way-mass galaxies in ROMULUS are found to host an average of 12 SMBHs that typically wander the halo far from galactic centre.’

‘This analysis shows that our current census of supermassive black holes is incomplete and that a substantial population of off-centre wanderers likely exists,’ the team concluded.

The full findings of the study were published in the journal Monthly Notices of the Royal Astronomical Society.

The galactic centre of the Milky Way is dominated by one resident, the supermassive black hole known as Sagittarius A*.

Supermassive black holes are incredibly dense areas in the centre of galaxies with masses that can be billions of times that of the sun.

Evidence of a black hole at the centre of our galaxy was first presented by physicist Karl Jansky in 1931, when he discovered radio waves coming from the region.

Pre-eminent yet invisible, Sgr A* has the mass equivalent to some four million suns.

At just 26,000 light years from Earth, Sgr A* is one of very few black holes in the universe where we can actually witness the flow of matter nearby.

Less than one per cent of the material initially within the black hole’s gravitational influence reaches the event horizon, or point of no return, because much of it is ejected.

Consequently, the X-ray emission from material near Sgr A* is remarkably faint, like that of most of the giant black holes in galaxies in the nearby universe.

The captured material needs to lose heat and angular momentum before being able to plunge into the black hole. The ejection of matter allows this loss to occur.