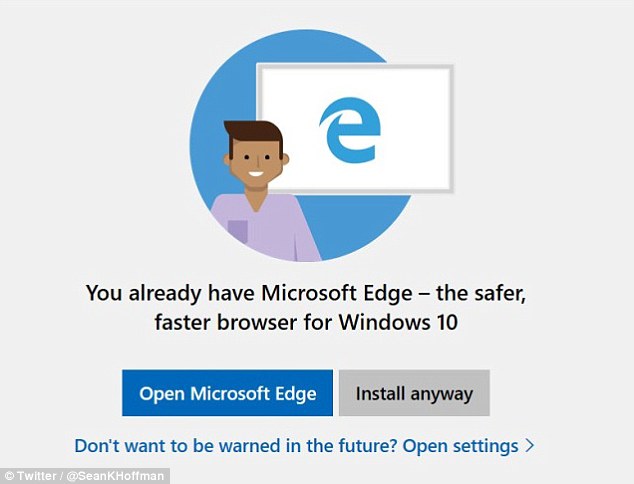 Microsoft now includes a warning that cautions Windows 10 users to avoid installing browsers from rival companies, including Google Chrome and Firefox. The operating system shows the pictured pop-up warning when you attempt to install

WHAT ARE THE MOST POPULAR PC INTERNET BROWSERS?

The feature has been spotted in the beta version of the latest edition of Windows.

In a statement, Microsoft said the warning was being tested with users who are part of its ‘Insiders’ beta initiative.

However, the warnings do not stop any software being installed.

‘Customers remain in control and can choose the browser of their choice.’

However, not everyone is happy with the prospect of their decision to use third party browsers – which are far more popular with users than Edge – being questioned.

‘I proceed to launch the Firefox installer and Windows 10 pops this up? If I wanted to use your browser, I would.’

This isn’t the first time that the firm has attempted to curtail its customers from using other web browsers.

Last year, Microsoft debuted its streamlined Windows 10 S operating system, which debuted on its Surface laptop, that would not allow users to install a third-party web browsers.

It follows rumours that Microsoft is working on a new subscription model for Windows 10 customers that will allow the company to automatically take care of any glitches. 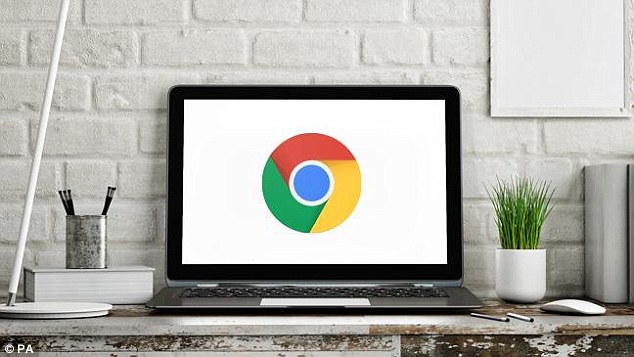 However, users have bemoaned the updates, which have been plagued with errors.

Earlier this year, Microsoft was forced to delay its April 2018 update after beta testers unearthed a serious glitch that caused computers with Intel-branded solid state drives to crash.

When the patched update rolled-out, it contained a glitch that triggered the machine to freeze when users opened up the Google Chrome browser.

To solve the problem, Microsoft is reportedly looking to launch a new feature known as Microsoft Managed Desktop – although no release date has been confirmed.

The system will sell the Windows 10 operating system as a service, where users pay a monthly subscription fee to use the latest version of the software, with any glitches and bugs ironed out immediately by Microsoft.

HOW DO YOU UPDATE WINDOWS 10?

Windows 10 every so often checks for updates so you don’t have to.

When an update is available, it’s automatically downloaded and installed, keeping your device up to date with the latest features.

If Windows Update says your device is up to date, you have all the updates that are currently available.