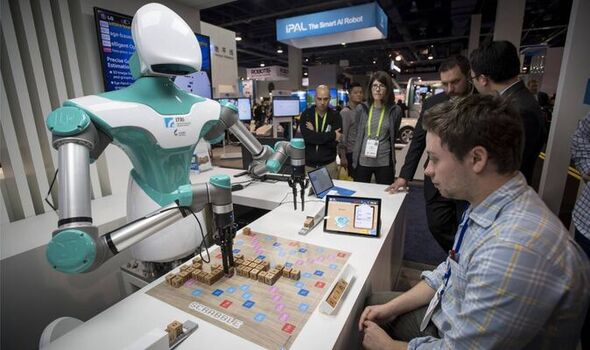 Galloping advances in Artificial Intelligence (AI) mean that the possibilities for romances and relationships with a computerised partner could be pulled from the realms of science fiction into reality.

The research for the Faraday Institute and the Theos think tank has exposed a major gender divide in attitudes to AI.

While 28 percent of men would consider getting an AI companion, only 13 percent of women would.

Movies such as Ex Machina (2014) and Her (2013) have explored the potential pitfalls of relationships between humans and AI creations – and digital assistants such as Amazon’s Alexa and Apple’s Siri are now part of family life – but technological breakthroughs have triggered calls for the ethical implications to be debated.

Perhaps unsurprisingly, young people were much more open to the idea of such a companion than older generations. The YouGov polling found that while 29 percent of those aged 16 to 29 would consider it, this was true for a mere eight percent of people aged 70-plus.

Men were much more willing than women to trust a host of AI innovations which could soon be commonplace.

While 64 percent of women said they would be reluctant to get in a self-driving car, this was true for less than half (47 percent) of men.

Some men would be more willing to trust a robot with their health than another human being.

One in 10 men (10 percent) said they would prefer a robot to operate on them than a human surgeon. This was the case for fewer than one in 20 women (four percent).

Men were also more likely to believe that “one day we will have to extend human rights to robots” – 21 percent as opposed to 13 percent.

Kathleen Richardson, Professor of Ethics and Culture of Robots and AI at De Montfort University said: “Unfortunately, technology in these areas is being significantly shaped by men who have a very particular set of assumptions, motivations, priorities and goals. All too often, these risk excluding women and eroding human relations in a way that will ultimately harm both men and women.”

However, when it came to question of whether robots will one day have a soul, there was almost no gender divide. Just six percent of men and five percent of women think this will happen.

Such questions are now the focus of serious debate as scientists on different continents race to perfect AI.

Nick Spencer, a senior fellow at Theos said: “Artificial Intelligence is one of the fastest moving scientific areas and is increasingly asking penetrating questions about what it means to be human. It is sometimes assumed that the answers people give depend on whether they are religious but the research shows that other factors, not least gender, play a massive role.

“The conversations we need about these issues will require us to draw on scientific, philosophical, and religious ideas.”

The report, “Science and Religion: Moving Away from the Shallow End, is based on a survey of 5,000 adults more than 100 in-depth expert interviews.