Meet the DUAL-GENDER stick insect! Pet is confirmed to be half-male and half-female – and is the first creature of its kind

A pet stick insect gave its owner a shock when it shed its skin and revealed itself to be half-male and half-female.

Named Charlie, the green bean stick insect is the ‘first reported gynandromorph’ in that species according to experts at the Natural History Museum.

They said the creature, which shed its skin at home in Suffolk to reveal the bright green body of a female and brown wings of a male, was a ‘particularly impressive specimen’. 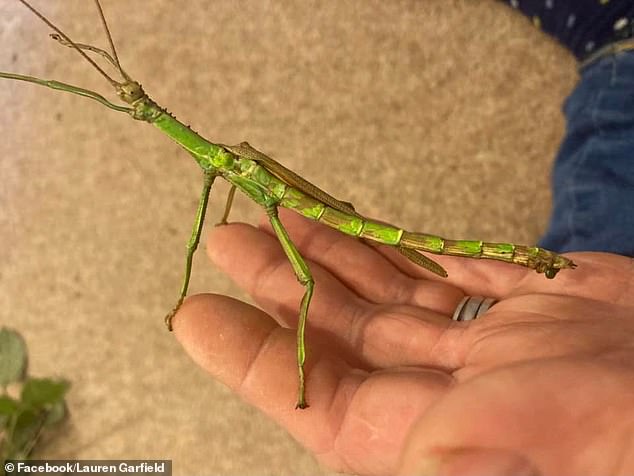 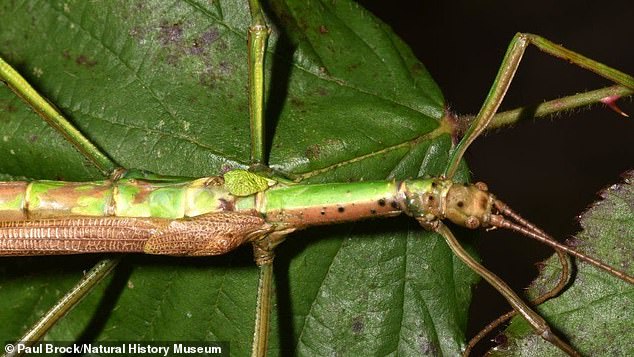 The green bean stick insect is the ‘first reported gynandromorph’ in that species according to the experts at the Natural History Museum. 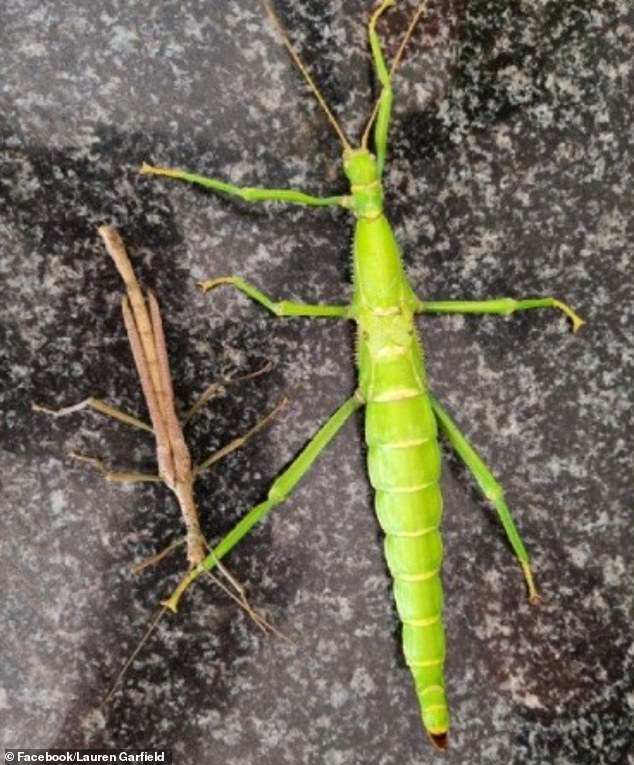 WHAT IS A GYNANDROMORPH?

Gynandromorphs are not common in the wild, though the coloration or markings of some species make the results more striking than others.

A gynandromorph is an organism that has both male and female characteristics – or, a male-female chimera.

It’s often seen in insects, though gynandromorphic birds, snakes, lobsters and other animals have been observed, too.

However, she said unfortunately the insect would have to be euthanised so it can be studied in the future, because if they die naturally the creatures ‘shrivel up and lose their colour’.

Mrs Garfield said that Charlie originally looked like the other stick insects she keeps and breeds at her home in Waldringfield.

But when it shed its skin, people began to take notice, so she shared a ‘weird post alert’ about the stick insect, known as Diapherodes gigantea, on her Facebook page.

‘That means half of it is female (the green side) and half male (brown side with a wing).’

She said her son was so excited by the discovery that she took Charlie into school to show to the other children, before getting in touch with an insect expert at the Natural History Museum in London.

After swapping photographs, she later agreed to post Charlie to the museum so the stick insect could be further inspected by experts.

In her Facebook post, Mrs Garfield added: ‘It’s rarely been reported before in this species so Charlie (named by the kids) has been signed over to, and has today gone to the Natural History Museum in London, to be added to their collection and I’ve been asked to write a journal article about it. I’m strangely excited.’

The insect expert she spoke to, Paul Brock, told the BBC: ‘Lauren’s specimen has a largely brown (male) body form on the right hand side, with full length hind-wings.

‘The left hand side is not as broad as a typical adult female, but broader than a normal male and mainly apple green, as in a normal female.

‘In a gynandromorph, including this individual, the genitalia are not properly formed so although male-like, it would not be able to mate properly with a female.’

Mr Brock said Charlie would be added to the Natural History Museum’s collection, ‘where it will be of interest to researchers’.

The species is native to three Caribbean islands — St Vincent, Grenada and St Lucia — and in the wild they feed on the leaves of plants and trees in rainforest areas.

In captivity, the insects eat the leaves of brambles, eucalyptus or oak.

They are considered relatively easy pets to keep, with a lifespan in captivity of up to one year.