Life on Mars may once have thrived miles beneath the surface of the Red Planet where geothermal heat could have melted the thick ice sheets, scientists claim.

Researchers from Rutgers University used computer simulations to calculate the likelihood of life emerging on the Red Planet and where it may have first formed.

They say that even if you pump greenhouse gases like carbon dioxide and water vapour into the early Martian atmosphere in simulations – you still can’t get a long-term warm and wet surface that would be capable of sustaining life.

However, they say that four billion years ago the Red Planet had high geothermal activity underground that melted ice sheets and may have allowed life to thrive.

Geothermal activity on Mars could be a solution to the long-standing ‘faint young Sun paradox’, according to the US research team. 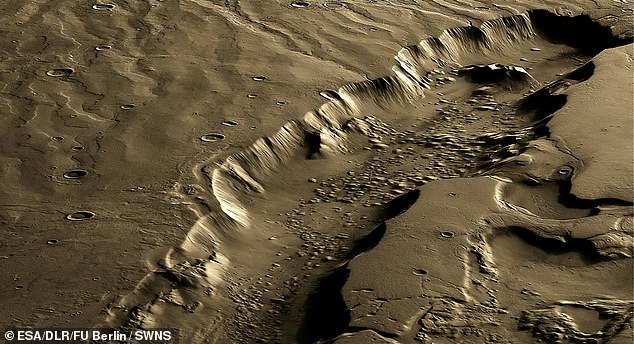 A vertically exaggerated, false-colour view of a large, water-carved channel on Mars called Dao Vallis that is evidence liquid water once flowed on the Red Planet four billion years ago

Four billion years ago the Sun was 25 per cent dimmer than it is today, meaning the climate of early Mars should have been freezing – but signs of minerals, chemicals and ancient riverbeds suggest that during this period Mars had flowing water.

Lead author Dr Lujendra Ojha said ‘the faint young sun paradox may be reconciled, at least partly, if Mars had high geothermal heat in its past.’

It also has implications for NASA’s current Perseverance mission. The robot has instruments for collecting rock samples up to 30 feet deep after it lands in February.

If Dr Ojha and colleagues are right, they will ‘need a bigger drill’ to find signs of microbial life as it likely exists miles below the surface.

It is possible to go much deeper – the largest hole ever dug on Earth is the Kola Superdeep Borehole deep in the Arctic Circle on the Kola Peninsula.

The hole goes down about seven and a half miles – but took nearly 20 years to get that far – so it could be some time before we get samples from deep inside Mars.

The sun is a massive nuclear reactor that generates energy by fusing hydrogen into helium and has gradually brightened and warmed the surface of planets.

About four billion years ago, the Sun was much fainter than it is today – back to a time when it was only about 600 million years old.

The ‘top soil’ or regolith on the Martian surface has evidence of ancient riverbeds, chemicals and minerals that show it was a waterworld 4.1 to 3.7 billion years ago.

On rocky planets like Mars, Earth, Venus and Mercury elements like uranium, thorium and potassium generate heat via radioactive decay.

In such a scenario, liquid water occurs through melting at the bottom of thick ice sheets – even if the Sun was weaker than now. 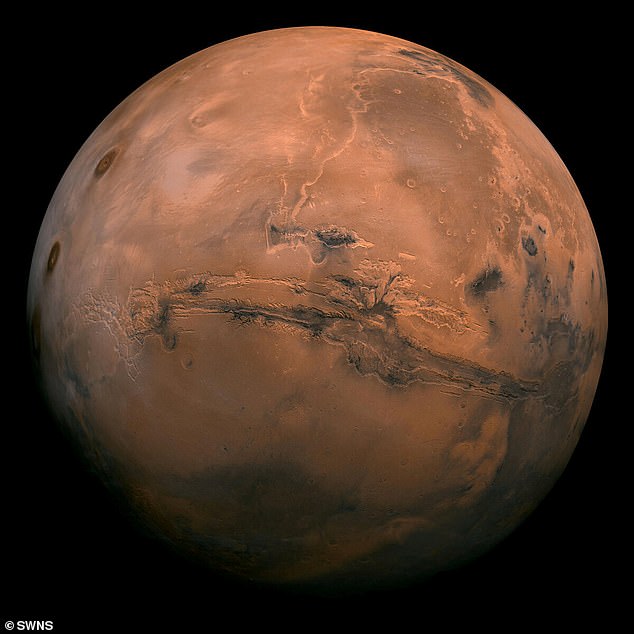 Four billion years ago the Sun was 25 per cent dimmer than it is today, meaning the climate of early Mars should have been freezing – but signs of minerals, chemicals and ancient riverbeds suggest that during this period Mars had flowing water

On Earth, for example, geothermal heat forms subglacial lakes in areas of the West Antarctic ice sheet, Greenland and the Canadian Arctic.

Similar melting probably explains rivers and seas that have been found, dried up, on cold, freezing Mars four billion years ago.

Analysis of various datasets showed the conditions needed for subsurface melting were widespread – so could happen more easily than realised.

Even a warm, wet climate without a magnetic field, atmospheric thinning and a drop in global temperatures, would only have enabled flowing water at great depths.

This is where life would have been found – if it ever originated, said the researchers. 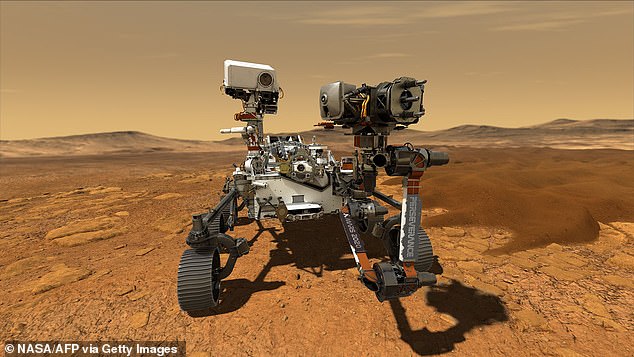 Dr Ojha added: ‘At such depths, life could have been sustained by hydrothermal activity and rock-water reactions.

‘So, the subsurface may represent the longest-lived habitable environment on Mars.’

NASA’s Mars InSight spacecraft which landed in 2018 is the first to study the deep interior of the planet – although it will only drill 16ft inside the planet.

However, the mission will be looking at the crust, mantle and core of the Red Planet using a series of cutting edge instruments.

These will use seismology, heat flows and tracking to see deep into the rocky world.

It may allow scientists to better assess the role of geothermal heat in the habitability of Mars during the Noachian era, said Dr Ojha.

The findings have been published in the journal Science Advances.

How important is the presence of liquid water?

It is now widely believed that Mars holds a reasonably large volume of water.

However, the surface of the planet is so cold, this water exists only as ice.

In order for life to exist on a planet, many scientists believe it is essential for the world to possess liquid water.

Ever since technology has enabled mankind to gaze at Mars in detail, humans have been looking for indications that there was water on the red planet.

Did water used to flow on the surface of Mars?

The Mariner 9 mission revealed clues of water erosion in river beds and canyons, as well as evidence of weather fronts and fogs on Mars in 1971.

Later missions from the Viking orbiters, which first launched in 1975, revealed yet more details about how water flowed on the surface and carved valleys.

It was claimed the gullies seen on the surface of the planet had to have been formed by flowing water.

Scientists cited the debris and mud deposits left behind as evidence for moving water existing at some point in the history of the red planet.

However, the formation of these gullies has been hotly debated throughout the ensuing years.

Proof of ice in geological samples from Mars

Spirit and Opportunity, the twin rovers, found evidence of the presence of water enclosed in rock in 2007, when one of Spirit’s wheels broke and gorged a piece of stone.

Analysis of the silica-rich layer discovered in the scratch suggested it formed in the presence of liquid water.

In 2008, the Phoenix lander was gathering geological samples, and they disappeared after a few days.

Scientists thought these were pieces of ice. This assessment was confirmed when the lander later detected water vapour in a sample.

In 2012, Curiosity was meandering over an ancient martian seabed when it examined a number of rocks that were exposed to liquid water billions of years ago.

In 2012, Curiosity (pictured) was meandering over an ancient martian seabed when it examined a number of rocks that were exposed to liquid water billions of years ago

These dark streaks populate the areas of Mars with a sharp incline.

Researchers speculated that these may have been caused by the intermittent flow of liquid water down steep banks on the planet.

In June 2013, Curiosity found powerful evidence that water good enough to drink once flowed on Mars. In September of the same year, the first scoop of soil analysed by Curiosity revealed that fine materials on the surface of the planet contain two per cent water by weight.

In 2015, Nasa claimed to have discovered the first evidence of liquid water on Mars in the present day.

The space agency said that its Mars Reconnaissance Orbiter (MRO) provided the strongest evidence yet that liquid water flows intermittently on present-day Mars.

In 2017, Nasa issued another statement rebuking its initial findings.

Features known as recurring slope lineae (RSL) were first identified in 2011 (pictured). These dark streaks populate the areas of Mars with a sharp incline. Researchers speculated that these may have been caused by the intermittent flow of liquid water

It said the dark features that run down steep inclines on the red planet were actually granular flows, where grains of sand and dust slip downhill to make dark streaks, rather than the ground being darkened by seeping water.

Images from the MRO revealed the streaks only exist on slopes steep enough for dry grains to descend the way they do on faces of active dunes.

Also in 2017, scientists provided the best estimates for water on Mars, claiming it once had more liquid H2O than the Arctic Ocean – and the planet kept these oceans for more than 1.5 billion years.

The findings suggest there was ample time and water for life on Mars to thrive, but over the last 3.7 billion years the red planet has lost 87 per cent of its water – leaving the surface barren and dry.

In a study published in the journal Science, ESO researchers have now discovered the first concrete evidence for liquid water on Mars.