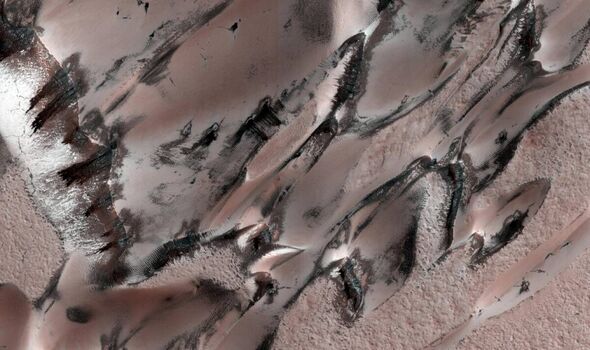 But the pictureperfect icescape comes with a bite… temperatures there plummet to minus 123 Celsius.

The images were snapped by a hi-res camera on the Mars Reconnaissance Orbiter spacecraft.

A space agency spokesperson said: “Snow, ice, and frost accompany the season’s sub-zero temperatures. Some of the coldest of these occur at the planet’s poles.

“But cold as it is, don’t expect snow drifts worthy of the Rocky Mountains.

“No region of Mars gets more than a few feet of snow, most of which falls over flat areas.”

The Orbiter has been studying Mars since late 2006.

The craft is analysing its geology and climate, checking out possible landing sites for future missions.