Mars could be flowing with LAVA: Dark deposits of dust are discovered more than 18ft below the surface, suggesting there has been an volcanic activity in the last 50,000 years

Mars may not be the cold, barren wasteland scientists have long believed – new res there is magma flowing deep below the Martian surface that spewed form a volcano in the last 50,000 years.

A team of international scientists, led by ETH Zurich, analyzed a cluster of more than 20 recent marsquakes, some of which may have been triggered by a warm source that could only be explained by present day molten lava.

With this in mind, the group looked at satellite images of the region and found dark deposits of dust located more than 18 feet below the surface.

The discovery, if confirmed, completely writes the history of Mars that suggested volcanic activity has not been present for at least the past four billion years. 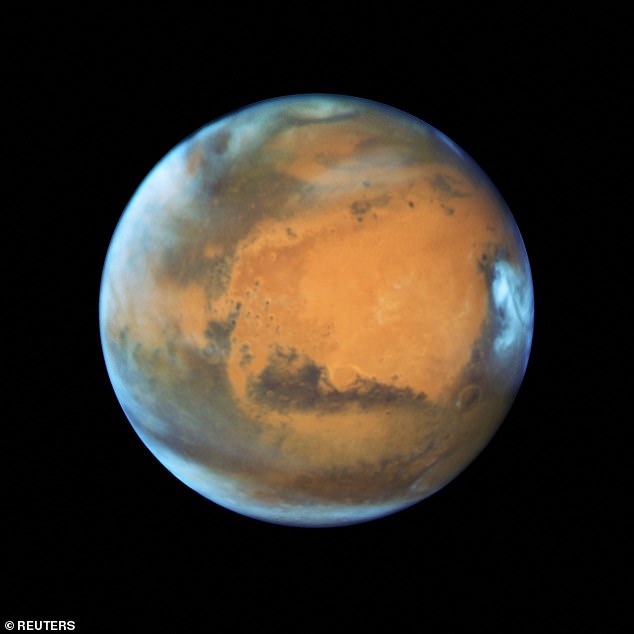 Mars was once teeming with volcanic activity, but the last eruption was believed to happen some four billion years ago. A new study, however, could rewrite the Martian world’s history

Simon Staehler, the lead author of the paper, said in a statement: ‘The darker shade of the dust signifies geological evidence of more recent volcanic activity—perhaps within the past 50,000 years—relatively young, in geological terms.’

The team was investigating quakes in the Cerberus Fossae, which is a series of semi-parallel fissures on Mars that were formed by faults pulling the crust apart, using NASA’s Insight lander that arrived on the Red Planet November 2018. 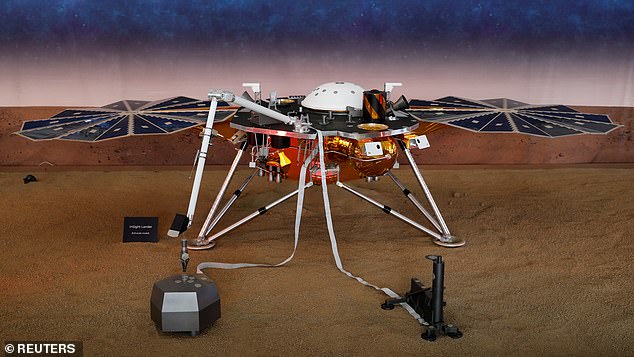 The team  made the discovery using NASA’s Insight lander that arrived on the Red Planet November 2018. The technology has proven successful at detecting marsquakes 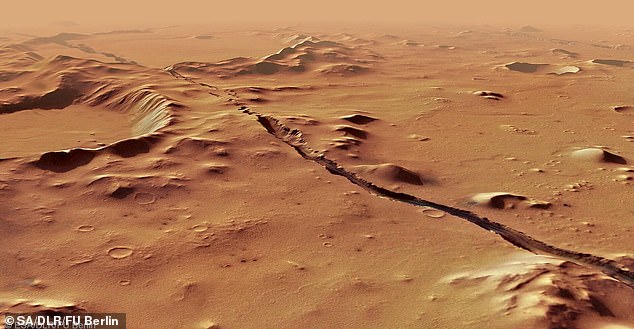 The team was investigating quakes in the Cerberus Fossae, which is a series of semi-parallel fissures on Mars that were formed by faults pulling the crust apart

It’s mission is to uncover how a rocky body forms and evolves to become a planet by investigating the interior structure and composition of Mars.

And it will also determine the rate of Martian tectonic activity and meteorite impacts.

Previous research on the Cerberus Fossae has suggested that the region was volcanically active within the last 10 million years, but the new discovery could rewrite the timeline.

According to Staehler ‘it is possible that what we are seeing are the last remnants of this once active volcanic region or that the magma is right now moving eastward to the next location of eruption.’

When analyzing the quakes, the team picked up on a deeper low-frequency marsquake that suggests a structurally weak, potentially warm source region consistent with recent magmatic activity at 18 to 31 feet below the surface.

‘While there is much more to learn, the evidence of potential magma on Mars is intriguing,’ Anna Mittelholz, Postdoctoral Fellow at ETH Zurich and Harvard University.

Previous research on the Cerberus Fossae has suggested that the region was volcanically active within the last 10 million years, but the new discovery could rewrite the timeline

The groundbreaking discovery comes just a few months after the Australian National University proposed the quakes are triggered by a sea of magma in the Red Planet’s mantle.

This research, announced in April, also analyzed data from Insight, which first arrived on Mars in November 2018, and immediately found the planet was rumbling.

So far it has detected hundreds of marsquakes, but Hrvoje Tkalčić of the Australian National University in Australia and his colleague, geophysicist Weijia Sun of the Chinese Academy of Sciences, wanted to look for quakes that might have gone unnoticed in the InSight data.

Most of them resemble the waveforms of two Cerberus Fossae quakes that took place in May and July 2019, suggesting that the smaller quakes are related to the larger ones.

While looking to establish the cause of the quakes, the researchers discovered that there was no pattern in the timing of them, which ruled out the Martian moon Phobos being of influence.

‘We found that these Marsquakes repeatedly occurred at all times of the Martian day, whereas Marsquakes detected and reported by NASA in the past appeared to have occurred only during the dead of night when the planet is quieter,’ Tkalčić said

‘Therefore, we can assume that the movement of molten rock in the Martian mantle is the trigger for these 47 newly detected Marsquakes beneath the Cerberus Fossae region.’