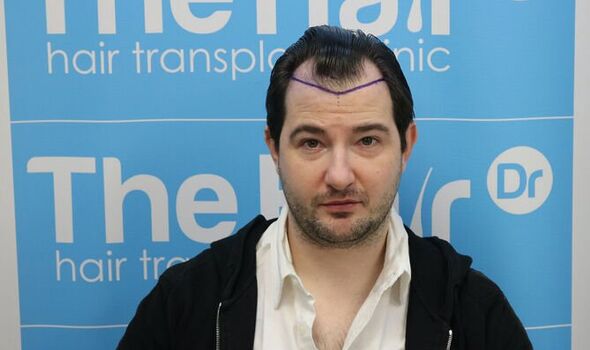 Dan Smith says that fans of the Netflix show have been stopping him in the street begging for a selfie – with many believing him to be Simon Leviev. The 37-year-old’s claim to fame came as a surprise after struggling with male pattern baldness since his early 20s.

The sales director says he is still not used to being the centre of attention, let alone for looking like a TV celebrity, reports The Mirror.

Dan said: “My hair loss started at 21 and got steadily worse. I kept waking up to find my pillows covered in my hair, and it began to make me very paranoid.

“I noticed that I was starting to look a lot older than I was.”

“I started to develop an obvious bald patch in the middle of my head and nothing would cover it.

“I spent a fortune on pointless hair growth tablets and miracle creams in the hope they would help me, but they didn’t.

“I felt quite depressed and just wanted to feel more confident again.”

After much research, brave Dan decided to undergo a pricey hair transplant procedure, in the hopes of getting back the youthful hairline he had lost.

He said: “I thought about it for years and I was honestly wasting so much money on hair treatments, but they just weren’t having much effect.

“I did a lot of research online, to evaluate my options, and I noticed a lot of people saying that hair transplants were a good option and I’d seen a few celebrities have them.

“I went to see a surgeon in my hometown of Manchester but unfortunately I didn’t feel like they understood me.

“They told me my baldness was nothing to be concerned about, which to me didn’t seem right. I did more digging online and that’s when I came across Dr Arshad.”

Dr Fas Arshad is the world-renowned expert behind The Hair Dr – Hair Transplant Clinic in Leeds.

“He was very thorough. First and foremost, I felt like Dr Arshad really understood my issues.

“He took the time to listen to me, looked at my hair, assessed my hairline, and discussed my options with me,” added Dan.

“He even took the time to look at my hairline to identify the best shape for me that would achieve the most natural results.

“The whole procedure was explained in detail clearly. He made sure I completely understood the procedure, complication risk, aftercare, and results I could expect before I made my decision.

“I was sent home with a very large booklet to read through to help me further understand the procedure.”

Dan underwent his hair transplant procedure in December 2020 – just a few months before the Covid-19 pandemic kicked in.

“Directly after, I was very tired and scared I would accidentally knock the hair follicles out.”

That was when Dan drastically changed his lifestyle; paving way for the man he has become today – and a few unlikely comparisons.

Dan said: “I started to become a lot more conscious of looking after myself. I made an effort to make healthier choices, and along with my hair I noticed a drastic change in my overall appearance.”

Around one year after his hair transplant, Dan’s boss noted that he had begun to look a lot like the infamous ‘Tinder Swindler’ made popular by the Netflix documentary.

“Initially I dismissed it as a one-off comment; a bit of banter. But then other people started to make similar comparisons.

“I was once stopped four times in a day in the street for pictures – people really thought I was him,” said Dan.

“It’s always funny when they realise their mistake. I do think I do sort of look similar to Simon Leviev, and I find it amusing.

“To be fair, Simon Leviev has a very nice hairline, so I don’t mind the comparisons in that respect.”

Dr Arshad said: “Dan’s story is not uncommon. Male pattern hair loss is a very common condition that can affect up to 85% of men after a certain age.

“Usually, the clear signs of male pattern hair loss start around the age of 50, but for some, it can start as early as the late teens, or early twenties.

“Male pattern hair loss tends to develop slowly and may take several years for you to notice visually.

“The visual signs of male pattern baldness include a receding hairline, patterned thinning of hair or significant accelerated hair loss.

“One of the most popular, and effective treatment methods to address male pattern hair loss is a hair transplant.

“The procedure is minimally invasive, and it can also be used to restore eyelashes, eyebrows, beard hair and to fill in scars.

“Potential candidates need to bear in mind that the process does not create new hair but rather re-distributes existing hair, and therefore there must be enough hair to transplant for the procedure to be successful.

“I am very open and transparent with my patients about this, so they understand the entire procedure before they undergo it.”

Since the procedure, Dan says his overall confidence has improved and he loves the results of his hair transplant.

“He’s no longer conscious of the way he looks and feels a lot more confident within himself – particularly enjoying being mistaken for the millionaire playboy who caused a stir on Netflix.

Dr Arshad who performed Dan’s surgery added: “Hair is intrinsically linked to a person’s self-confidence, so the impact of male pattern hair loss or other forms of alopecia is severely underestimated, in my opinion.

“I often see once patients have a hair transplant it leads to other health improvements particularly mental health, which is great to see and something.”