Male worms have a ‘sex switch’ in their brain which helps them insert their ‘penis’ into a mate, scientists find

A sexual and biological phenomenon has been discovered lurking in the cells of the unspectacular roundworm.

UCL researchers found male worms have the ability to turn a normal cell into a navigation neuron which helps the animal get into the right position during sex.

The cell changes as the animal reaches sexual maturity and it allows the male worm to shimmy down its mate and get into the right spot so its reproductive organ, called spicules, can get inside its mate.

The ability for a mature cell to change its purpose mid-way through an animal’s life is almost unheard of in nature.

The researchers hope to unpick the cellular mechanism in order to reprogramme cells to take up new functions, potentially creating new therapeutics. 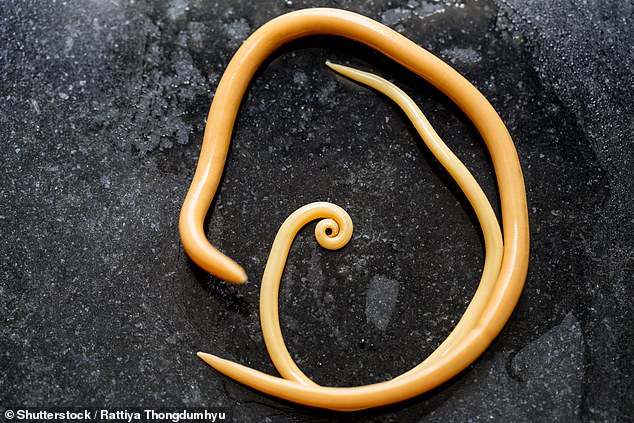 UCL researchers found male worms have the ability to turn a normal cell into a navigation neuron which helps the animal get into the right position during sex. The cell changes as the animal reaches sexual maturity (stock)

Co-lead author Dr Richard Poole said: ‘Once a cell has its own identity with a particular function, this is considered to be fixed throughout the life of the animal.

‘But here, we describe in detail the case of a specialised cell that switches to a new cell type with a completely unrelated function later in the animal’s life.’

Roundworms, also known as C. elegans, are studied extensively by scientists as a model organism, making this discovery all the more surprising.

The team of experts were looking at a glial cell in their study, which is involved in the nervous system but is not a neuron.

Male roundworms have extra brain cells dedicated to ensuring they remember to have sex.

These neurons, which are male-specific, are required for sex-based differences in learning, suggesting that sex differences in cognitive abilities can be genetically hardwired.

However, they observed a ‘glia-to-neuron cell fate switch’ which is activated when a male worm reaches puberty and becomes sexually mature.

The turns the glial cell into a specialised neuron which allows the worm to slither backwards along the back of its partner during mating.

This so-called Molina Manoeuvre, named after the researcher to first spot it, Dr Laura Olina-Garcia, is where the newly formed cells come into play.

They help guide the worm so its spicules, the worm equivalent of a penis, can find it suitable location.

No examples of cell switches have yet been seen in any vertebrate species, including humans.

Dr Poole says the discovery implies that there is more to cell identity than previously believed.

‘The findings can also be applied to develop better, more efficient methods for reprogramming cells in the lab, which is a widely used strategy for cell replacement therapies for conditions such as spinal cord injury and neurodegenerative conditions including Parkinson’s or Huntington’s disease,’ he says.

‘A deeper understanding of how animal movements are guided by self-sensory feedback could also be useful to robotics, to improve the execution of behavioural sequences,’ she says.

The research is published today in the journal eLife.