Extreme marine heat has become the ‘new normal’: More than HALF of the ocean surface has experienced excessively warm temperatures since 2014, study warns

More than half of the surface of the world’s oceans have experienced excessively warm temperatures since 2014 — with extreme marine heat now the ‘new normal’.

This is the warning of researchers from the Monterey Bay Aquarium, who analysed a century-and-a-half’s worth of global marine temperature data.

Extreme marine temperatures can lead to the collapse of crucial marine ecosystems like coral reefs, kelp forest and seagrass meadows, the team said.

The findings, they added, are further evidence for the urgent need to reduce climate-changing greenhouse emissions from the burning of fossil fuels. 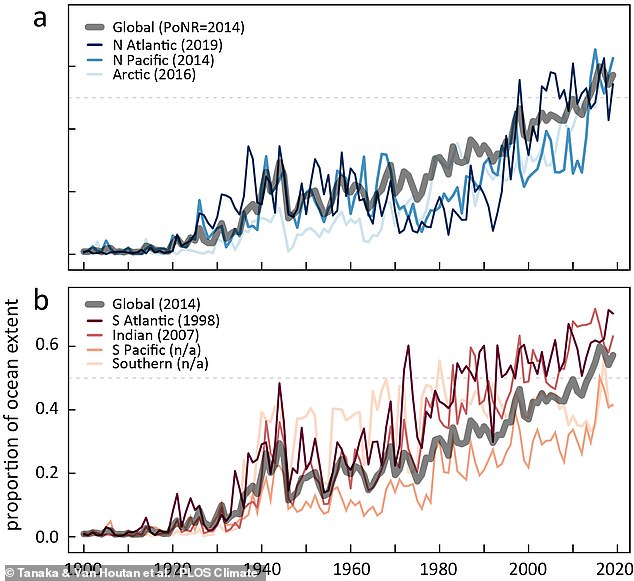 More than half of the surface of the world’s oceans have experienced excessively warm temperatures since 2014 — with extreme marine heat now the ‘new normal’. Pictured: the fraction of the ocean’s surface experiencing extreme heat, divided up by the hemispheres

The study, the team said, developed out of research into the history of kelp forests growing on the Californian coastline over the last century.

As part of this, they realised that they needed to learn the history of local sea surface heat extremes — which are key stressors of canopy kelps.

From here, the experts expanded their focus beyond California’s shores to understand the occurrence of marine heat episodes on a global scale.

The research was conducted by biologists Kyle Van Houtan and Kisei Tanaka of the Monterey Bay Aquarium in California.

‘Climate change is not a future event,’ said Dr Van Houtan, who led the research during his tenure as chief scientist at the aquarium.

‘The reality is that it’s been affecting us for a while.

‘Our research shows that for the last seven years more than half of the ocean has experienced extreme heat.’

‘These dramatic changes we’ve recorded in the ocean are yet another piece of evidence that should be a wake-up call to act on climate change.

‘We are experiencing it now, and it is speeding up.’

In their study, the team first determined average ocean temperatures — based on historic records — for the period from 1870 to 1919, which provided them with a fixed historical benchmark.

They then used this, by taking the top two per cent of temperature increases, to define what they would regard as extreme heat.

With this established, the team were then able to map the occurrence of extreme heat episodes over time, looking at how frequently they occur and whether such rates have been increasing over time.

Their analysis revealed that 2014 was the first year in which more than half of the world’s ocean surface experienced what historically would have been regarded as extreme heat — with the percentage seen to increase over time.

In fact, by the most recent year included in the study, 2019, a whopping 57 per cent of the ocean experienced extreme heat.

‘Today, the majority of the ocean’s surface has warmed to temperatures that only a century ago occurred as rare, once-in-50-year extreme warming events,’ Dr Van Houtan explained.

‘Climate change is not a future event,’ said biologist Kyle Van Houtan. ‘The reality is that it’s been affecting us for a while.’ Pictured: the change in the proportion of extreme ocean surface temperatures over the last four decades

Such roles, he said, include supporting ‘sustainable fisheries, buffering low-lying coastal regions from extreme weather and serving as a carbon sink to store the excess carbon put in the atmosphere from human-driven greenhouse emissions.’

The full findings of the study were published in the journal PLOS Climate.