Air pollution can increase your risk of heart and lung disease: Long-term exposure to smog boosts the chance of heart attack, stroke and pneumonia, study warns

Long-term exposure to low levels of air pollution can increase the risk of heart and lung disease, a new US study reveals.

Researchers used the addresses of 63 million US adults aged 65 and older to assess their exposure to particulate matter, nitrogen dioxide (NO2) and ozone (O3).

Pollution exposure was then compared to whether they went on to experience a heart attack, stroke, atrial fibrillation and pneumonia.

Worryingly, long-term exposure to all three pollutants at low concentrations – below international regulations – was consistently linked with an increased risk of all four conditions.

In all forms, air pollution can cause harm to the cardiovascular and respiratory systems due to its effect on inflammation in the heart and throughout the body.

The study authors say people should be conscious of the air quality in their neighbourhoods to avoid harmful exposure over long periods of time.

London’s air quality, for example, is at illegal levels and is the worst air quality in the country. 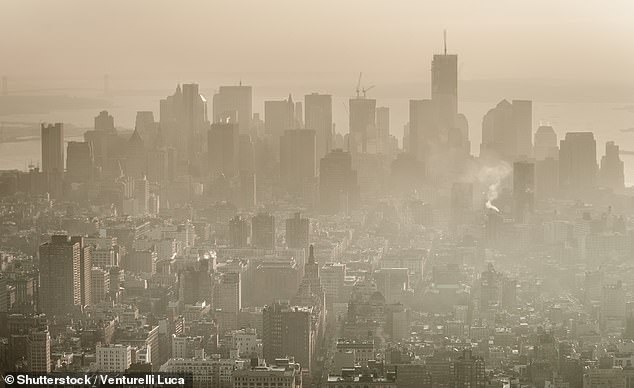 Exposure to what is considered low levels of air pollution over a long period of time can increase the risk of heart attack, stroke, atrial fibrillation and pneumonia among people ages 65 and older. Pictured, air pollution over New York

They are created from a variety of sources, including traffic, construction sites, unpaved roads, fields, smokestacks or fires.

Most particles form in the atmosphere as a result of reactions of chemicals such as sulfur dioxide and nitrogen oxides.

‘Long-term exposure to air pollution was associated with an increased risk of hospital admissions with cardiovascular and respiratory outcomes on an additive scale among the elderly population of the United States,’ say the researchers, who are from the Harvard TH Chan School of Public Health in Boston.

‘Each unit increase in levels of particulate matter, nitrogen dioxide, and ozone were associated with thousands of additional admissions each year.

‘Air pollution should be considered as a risk factor for cardiovascular and respiratory disease.

‘The risk persists even at levels below current national and international guidelines.’

For their study, researchers examined hospitalisation records of more than 63 million Medicare enrollees in the US from 2000 to 2016.

The study measured three components of air pollution – particles 2.5 micrometres and under in diameter (PM2.5), NO2 and O3.

Particulate matter, or PM, comes from a variety of sources, including vehicle exhausts, construction sites, industrial activity or even domestic stoves and ovens – and has already been linked to premature death in people with heart or lung disease.

NO2, which comes from burning diesel and petrol in car engines, inflames the lining of the lungs and can reduce immunity to lung infections while exacerbating respiratory problems.

O3, meanwhile, is a secondary pollutant formed when sunlight and high temperature catalyse chemical reactions in the lower atmosphere.

When inhaled, O3 reacts chemically with many biological molecules in the respiratory tract, causing pulmonary and heart disease.

Using hundreds of predictors, including meteorological values, satellite measurements and land use to estimate daily levels of pollutants, researchers calculated the study participants’ exposure to the pollutants based upon their residential zip code.

Additional analysis included the impact of the average yearly amounts of each of the pollutants on hospitalisation rates for non-fatal heart attacks, ischemic strokes, atrial fibrillation and flutter, and pneumonia.

Long-term exposure to fine PM2.5 was associated with an increased risk of all four health outcomes – heart attacks, strokes, atrial fibrillation and flutter, and pneumonia.

PM2.5 had the highest effect on strokes – there was a 0.0091 per cent increase in the risk of stroke for each 1-µg/m3 (microgram per cubic meter of air) increase in annual levels.

Data also showed there were surges in hospital admissions for all of the health outcomes studied with each additional unit of increase in particulate matter.

Specifically, stroke rates increased by 2,536 for each additional ug/m3 increase in fine particulate matter each year.

There was an increased risk of stroke and atrial fibrillation associated with long-term exposure to nitrogen dioxide.

NO2 was associated with an increase in the risk of admission with stroke by 0.00059 per cent and atrial fibrillation by 0.00129 per cent, per parts per billion (PPB). 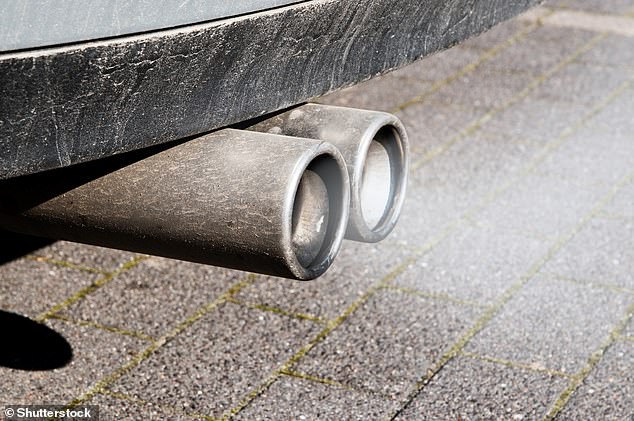 Particulate matter, or PM, comes from a variety of sources, including vehicle exhausts. Some PM, such as dust, dirt, soot, or smoke, is large or dark enough to be seen with the naked eye

Tropospheric ozone was associated with an increase in the risk of admission with pneumonia by 0.00413 per cent per PPB.

Pneumonia was the only health outcome in the study that seemed impacted by long-term exposure to ozone (O3) – which causes a smoggy haze that can damage the lungs.

However, researchers note there are currently no national guidelines denoting safe or unsafe long-term ozone levels.

The team also looked specifically at individuals who were only exposed to lower concentrations of air pollution – less than 10 µg/m3 for PM2.5, less than 20 PPB for NO2 and less than 40 PPB for O3 for all years.

‘We still found increased risk of hospital admissions with all of the studied outcomes, even at concentration levels below current national standards,’ said lead author of the study Danesh Yazdi.

‘More than half of the study population is exposed to low levels of these pollutants, according to US benchmarks.

‘Therefore, the long-term health impact of these pollutants should be a serious concern for all, including policymakers, clinicians and patients.’

The researchers further stratified the analyses to calculate the cardiovascular and respiratory risks associated with each of the pollutants among patient subgroups including gender, race or ethnicity, age and socioeconomic factors.

A heart attack (myocardial infarction or MI) is a serious medical emergency in which the supply of blood to the heart is suddenly blocked, usually by a blood clot (stock image)

For NO2, black individuals were at a higher risk than white individuals, while for O3, those who were male and younger had a higher probability of hospital admission with a heart attack as compared with those who were female and older.

The causality in the study could only be interpreted and not proven definitively, according to the researchers.

This was due to the limitations of the data available, which may have not included other known cardiovascular disease risk factors.

In addition, coding errors can occur in the Medicare database, which would impact the analyses.

The study has been published in Circulation.

Children who are exposed to high levels of air pollution in the womb and early life are more likely to suffer from high blood pressure, study finds

Babies exposed to air pollution when they’re still in the womb may end up with higher blood pressure as a child, a 2020 study suggests.

Researchers studied effects of exposure to environmental factors such as pollution, noise and a densely-built environment on babies both before and after birth.

The experts, from the Barcelona Institute for Global Health, looked at mothers and babies based in six European cities, including Bradford in the UK, Valencia in Spain and Heraklion in Greece.

The team assessed multiple aspects of the children’s environment – initially, during the prenatal period, the place of residence of the mothers during their pregnancy, and subsequently the homes of the children after birth.

They found a link between high blood pressure as a child and exposure to high levels of air pollution, as well as building density, noise, low proximity to green spaces and low socio-economic status.

Hypertension – high blood pressure – is one of the main risk factors of cardiovascular diseases, such as coronary artery disease and heart attacks.