Do you prefer country life? Thank your PARENTS! Love of nature is partially in your genes, study reveals

How much you enjoy spending time in nature appears — at least in part — to be something you inherit from your parents’ genes, a study of twins has revealed.

Researchers from the National University of Singapore and the University of Queensland conducted a survey of 1,153 pairs of adult twins in the United Kingdom.

Each twin was asked about how urban their living environment was, how they experience nature and how often this visit spaces like parks and private gardens.

Identical twins — who share nearly all the same genes — were found to be more similarly inclined towards nature than fraternal twins, who share half their genes.

Overall, heritability varied from 46 per cent for feelings about nature to 34 per cent for frequency of garden visits — suggesting genetics plays a moderate role here.

However, the team said, more than half of the differences between individuals were found to be explainable via environmental factors.

For example, people living in urban environments tend to have less experiences in nature, having limited access to gardens.

The findings, the researchers said, highlight the importance of providing access to natural spaces in shaping and encouraging nature-seeking behaviour.

Spending time in natural spaces has been found to improve mental wellbeing — even though people can experience and benefit from nature differently. 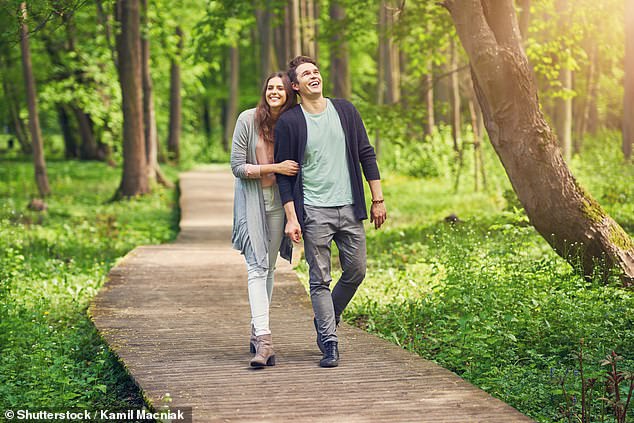 How much you enjoy spending time in nature appears — at least in part — to be something you inherit from your parents’ genes, a study of twins has revealed (stock image)

Twins are two individuals who form in the same uterus.

Two eggs are fertilised by two sperm and both implanted into the walls of the uterus at the same time.

These eggs form separately, in separate sacs adjacent to each other and share 50 per cent of their DNA the same as with non-twin siblings.

They can be different genders, though most are same-sex twins and they tend to run in families.

A single egg is fertilised by one sperm and embeds in the uterus wall, but at some point, it splits from one zygote into two.

Most identical twins split within eight days of conception.

They rarely run in families and there is evidence of common markers found in identical twins genomes.

The study — which recruited participants from the TwinsUK registry, part of the world’s most detailed study into twins — was undertaken by biologist Richard Fuller of the University of Queensland and his colleagues.

We compared twins who had been raised together with twins raised apart, in an attempt to demonstrate genetic heritability of two traits,’ said Professor Fuller.

These traits, he explained, were ‘how strongly they feel connected to nature, and the amount of time a person spends in nature.’

‘We were truly surprised by what we found,’ he added.

‘Depending on which characteristic you look at, these “nature-loving” behaviours were heritable between 34 and 48 per cent of the time,’ the biologist explained.

‘This means there may be innate genetic differences among people’s psychological connection with natural environments and how they experience them.

‘Our results help to explain why some people have a stronger desire than others to be in nature,’ he concluded.

The researchers also found that the strength of genetic factors on nature appreciation appeared to decline with age — perhaps, the team mused, as people gain a unique set of environmental conditions.

‘Our results reinforced previous findings that a person’s environment is the predominant driver behind their enjoyment of nature,’ Professor Fuller added.

‘But the new information on the role of genetics in shaping our relationship with nature is a significant discovery.’

According to lead paper author and behavioural scientist Chia-Chen Chang of the National University of Singapore, our growing understanding of the benefits of nature makes improving access to natural settings increasingly important.

‘We know that more and more people today are living in urban environments, and this is usually associated with more mental health issues,’ she said.

‘This includes lower levels of subjective wellbeing, a higher risk of psychiatric disorders, or increased depression and anxiety.’

‘Spending a little time at home in the garden can be a great way to experience some nature, but this can’t always be achieved, especially for those in urban areas,’ Dr Chang noted.

‘Increasing accessibility to nature for urban residents through projects such as communal gardens will be hugely beneficial and will play an important part in improving people’s wellbeing overall.’

The full findings of the study were published in the journal PLoS Biology.

CHILD MIND INSTITUTE ON THE BENEFITS OF NATURE

Child Mind Institute, a US charity devoted to children’s mental health, has drawn up a list of befits of getting kids outdoors more.

It says kids who play outside are smarter, happier, more attentive, and less anxious than kids who spend more time indoors.

‘While it’s unclear how exactly the cognitive functioning and mood improvements occur, there are a few things we do know about why nature is good for kids’ minds.’

The way that kids play in nature has a lot less structure than most types of indoor play.

There are infinite ways to interact with outdoor environments, from the backyard to the park to the local hiking trail or lake, and letting your child choose how he treats nature means he has the power to control his own actions.

It promotes creativity and imagination

This unstructured style of play also allows kids to interact meaningfully with their surroundings.

They can think more freely, design their own activities, and approach the world in inventive ways.

Living things die if mistreated or not taken care of properly, and entrusting a child to take care of the living parts of their environment means they’ll learn what happens when they forget to water a plant, or pull a flower out by its roots.

Nature may seem less stimulating than your son’s violent video game, but in reality, it activates more senses—you can see, hear, smell, and touch outdoor environments.

‘As the young spend less and less of their lives in natural surroundings, their senses narrow,’ said Richard Louv, author of the book Last Child in the Woods: Saving Our Children From Nature-Deficit Disorder.

‘This reduces the richness of human experience.

It gets kids moving

Most ways of interacting with nature involve more exercise than sitting on the couch.

Your kid doesn’t have to be joining the local soccer team or riding a bike through the park—even a walk will get her blood pumping.

Not only is exercise good for kids’ bodies, but it seems to make them more focused, which is especially beneficial for kids with ADHD.

It makes them think

Louv said nature creates a unique sense of wonder for kids that no other environment can provide.

The phenomena that occur naturally in backyards and parks everyday make kids ask questions about the earth and the life that it supports.

It reduces stress and fatigue

According to the Attention Restoration Theory, urban environments require what’s called directed attention, which forces us to ignore distractions and exhausts our brains.

In natural environments, we practice an effortless type of attention known as soft fascination that creates feelings of pleasure, not fatigue.