The lost legend of Balkanatolia: Forgotten continent from 40 MILLION years ago is rediscovered across present-day Balkans and Anatolia – and may have allowed Asian mammals to colonise Europe, study claims

An ancient forgotten continent that was wedged between Europe, Africa and Asia has been rediscovered.

It covers the present-day Balkans and Anatolia and has been dubbed Balkanatolia by researchers.

They say the continent may have allowed Asian mammals to colonise Europe some 34 million years ago, having previously been separated from neighbouring continents.

However, a major glaciation 34 million years ago likely lead to the formation of the Antarctic ice sheet, lowering sea levels in the process and connecting Balkanatolia to western Europe, according to the team. 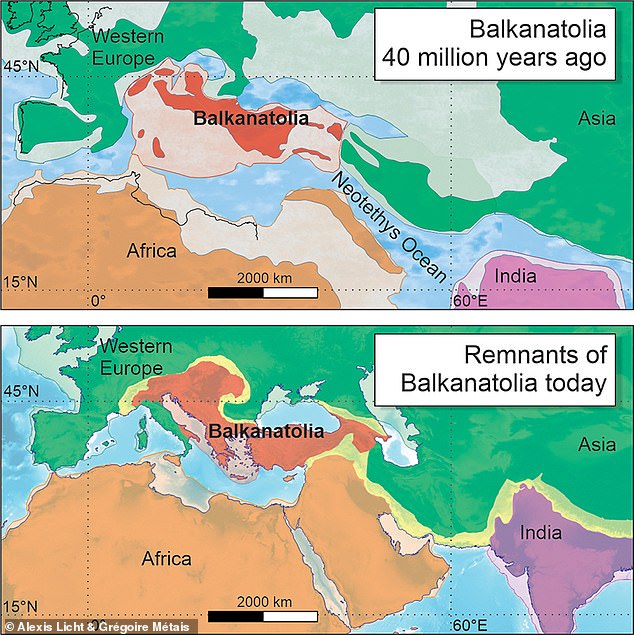 A lost continent that was wedged between Europe, Africa and Asia has been rediscovered. It covers the present-day Balkans and Anatolia and has been dubbed Balkanatolia (pictured)

WHAT WAS THE GRANDE COUPURE?

The Grande Coupure was an extinction event which happened around 34 million years ago.

It saw more than two-thirds of mammals in Africa and the Arabian Peninsula disappear during the Eocene-Oligocene transition, a period marked by global cooling and drops in sea level.

In Eurasia, these global environmental impacts led to a mass extinction of marine organisms, plants, and land animals.

It has largely been attributed to the influx of Asian mammals, but fossil evidence has suggested that certain Asian mammals were present in southern Europe 5 to 10 million years before the Grande Coupure.

Now researchers led by the CNRS think they have the answer.

They have rediscovered a forgotten continent that was wedged between Europe, Africa and Asia.

It covers the present-day Balkans and Anatolia and has been dubbed Balkanatolia.

The experts think Balkanatolia was separated from neighbouring continents until a glaciation lowered sea levels and connected Balkanatolia to western Europe.

This may have allowed Asian mammals to colonise the continent and led to the Grande Coupure.

This saw more than two-thirds of mammals in Africa and the Arabian Peninsula disappear during the Eocene-Oligocene transition, a period marked by global cooling and drops in sea level.

In Eurasia, these global environmental impacts led to a mass extinction of marine organisms, plants, and land animals known in Europe as the ‘Grande Coupure’.

European forests were home to native fauna such as Palaeotheres — an extinct group distantly related to present-day horses, but more like today’s tapirs — whereas Asia was populated by a more diverse fauna including the mammal families that are found today on both continents.

Around 34 million years ago, western Europe was then colonised by Asian species, leading to a major renewal of vertebrate fauna and the extinction of its native mammals – an event called the Grande Coupure.

However, fossils found in the Balkans point to Asian mammals being present in southern Europe 5 to 10 million years before the Grande Coupure, suggesting an earlier colonisation that has puzzled scientists.

Now, the team of French, American and Turkish paleontologists and geologists led by CNRS researchers think they have the answer.

They discovered a new fossil deposit in Turkey (Büyükteflek) dating from 38 to 35 million years ago, which yielded mammals whose affinity was clearly Asian, and are the earliest discovered in Anatolia until now.

They also found jaw fragments belonging to Brontotheres, animals resembling large rhinoceroses that died out at the end of the Eocene.

It led them to conclude that Balkanatolia was colonised 40 million years ago by Asian mammals as a result of geographical changes that have yet to be fully understood.

The researchers believe that a major glaciation some six million years later then lowered sea levels, connecting Balkanatolia to western Europe and allowed Asian mammals to colonise the continent.

‘We show that this dispersal event possibly coincides with precursor faunal turnovers in western Europe predating the Grande Coupure, and thus indicates the initiation of a southern route for Eurasian dispersal as early as the late middle Eocene,’ the authors wrote in their paper.

They said this triggered the end of Balkanatolia having its own distinct native species.

It may also have allowed Asian mammals to colonise Europe and led to the Grande Coupure.

A comparable turnover in Asian fauna has since been called the ‘Mongolian Remodelling’.

The study has been published in the journal Earth Science Reviews.

WHAT WAS THE EOCENE EPOCH?

The oldest known fossils of most of the modern orders of mammals appear in a brief period during the early Eocene and all were small, under 10 kg.

Both groups of modern ungulates, Artiodactyla and Perissodactyla, became prevalent mammals at this time, due to a major radiation between Europe and North America.

The early Eocene (Ypresian) is thought to have had the highest mean annual temperatures of the entire Cenozoic Era, with temperatures about 30°C.

It also had relatively low temperature gradients from pole to pole and high precipitation in a world that was essentially ice-free.

It was an important time of plate boundary rearrangement, in which the patterns of spreading centres and transform faults were changed, causing significant effects on oceanic and atmospheric circulation and temperature.

In the middle Eocene, the separation of Antarctica and Australia created a deep water passage between those two continents, creating the circum-Antarctic Current.

This changed oceanic circulation patterns and global heat transport, resulting in a global cooling event observed at the end of the Eocene.

By the Late Eocene, the new ocean circulation resulted in a significantly lower mean annual temperature, with greater variability and seasonality worldwide.

The lower temperatures and increased seasonality drove increased body size of mammals, and caused a shift towards increasingly open savanna-like vegetation, with a corresponding reduction in forests.