Is this the site of a Bible miracle? Lost church ‘where Jesus healed a bleeding woman’ is unearthed in the ancient Roman city of Caesarea Philippi

A long lost church thought to be where Jesus ‘healed the bleeding woman’, has been discovered by archaeologists buried underneath a path in an ancient Roman city.

Experts from the University of Haifa believe the church was within the ancient city of Banias that had been renamed Caesarea Philippi during the lifetime of Jesus.

Byzantine historian, Eusebius wrote that once the bleeding woman was healed she erected a statue to commemorate the miracle in a church by the springs in Caesarea Philippi – which is in the Golan Heights between Syria and Lebanon.

A recent archaeological dig in the city revealed a previously hidden church building that was underneath a path – near to the springs. 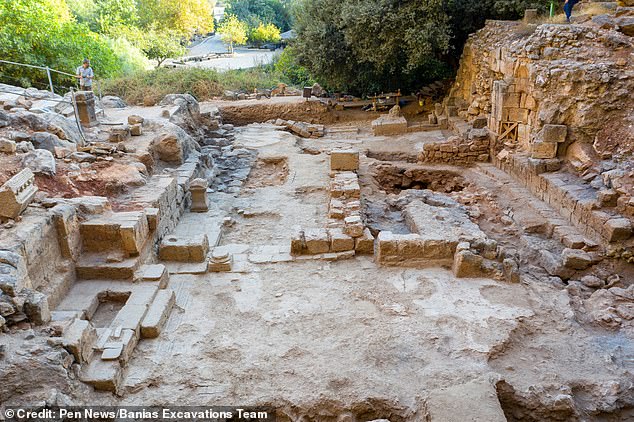 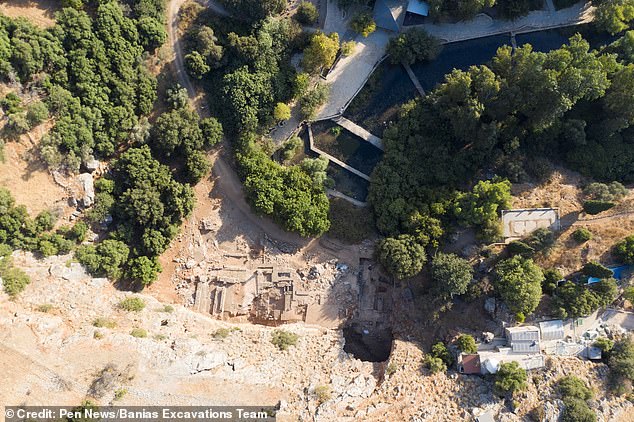 The newly-discovered church can be seen in the centre, at the mouth of the cave. This may have been the place where Jesus ‘performed a Biblical miracle’

Professor Adi Erlich said ancient sources claim that the statue was later broken into pieces and those pieces were displayed and given as relics.

‘We suggest that the church revealed by us might have been this church that was related to the miracle,’ said Erlich.

While there is another church nearby, Dr Erlich believes the newly-discovered one is a better fit for the site of the biblical miracle.

‘There is another church excavated some 30 years ago on the other side of the springs, but our little church is more of a memorial than a practical basilica for services,’ the researcher explained. 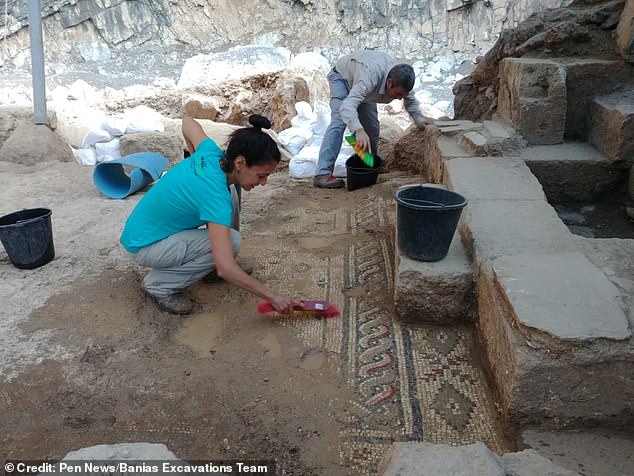 Researchers from Israel painstakingly excavated the church, which had been buried underneath a pathway and believe it is the most likely candidate for the location of the biblical miracle 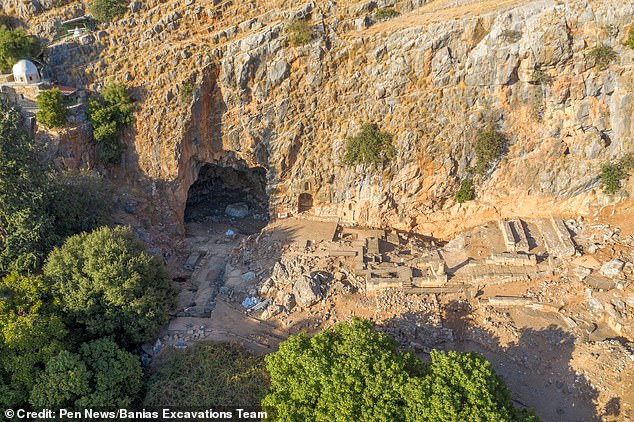 ‘So it could have served as the place commemorating the event.’

The archaeologist and her colleague Ron Lavi also found a stone dating back to 400 AD, which is marked with crosses – perhaps carved by early pilgrims.

Traces of an earlier Roman space dedicated to the God, Pan, were found in the same place, suggesting it had been used by another religion previously.

She said: ‘We found an altar with an inscribed dedication to the God, Pan, dedicated by a person from Antioch in Syria. 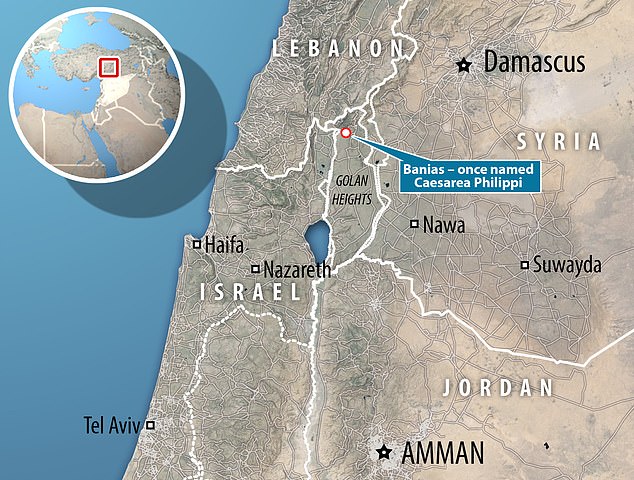 Byzantine historian, Eusebius wrote that once the bleeding woman was healed she erected a statue to commemorate the miracle in a church by the springs in Caesarea Philippi – which is in the Golan Heights between Syria and Lebanon

‘We also found architectural elements, a cultic pool and a water aqueduct.’

The name Banias is itself believed to have come from the God, Pan, having mutated from an earlier name, Panias.

It’s a mystery exactly why the ancient city, which is in the Golan Heights, ended up being abandoned.

‘The Roman phase part was probably ruined and rebuilt [as a church] by the Christians,’ said Dr Erlich. 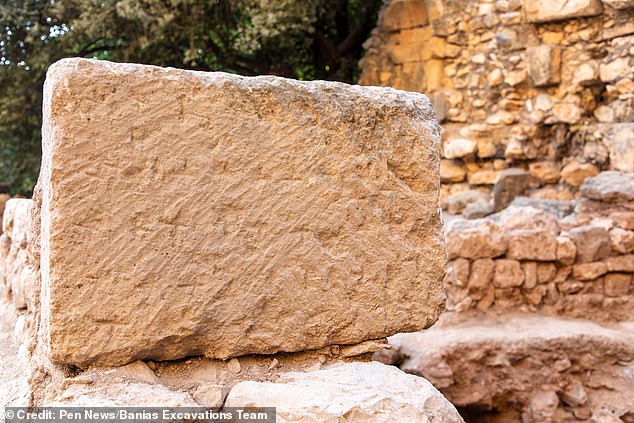 The archaeologists found a stone dating back to 400 AD, which is marked with crosses – perhaps carved by early pilgrims 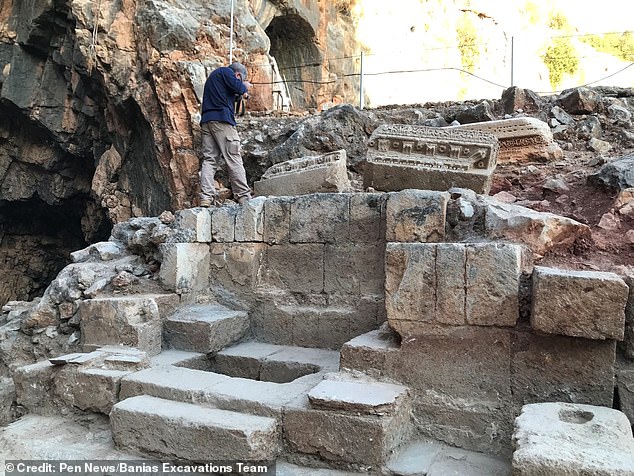 ‘The first phase of the church was hit by an earthquake, with half of the building sinking about a metre.

‘The second phase was abandoned, perhaps because of the decline of Christianity and the rise of Islam, but we can’t tell for sure.’

The miracle of Jesus healing the bleeding woman is recounted in the gospels of Matthew, Mark and Luke.

The Bible says she had bled for 12 years but – despite the care of many doctors – had continued to get worse, so she resolved to approach Jesus. 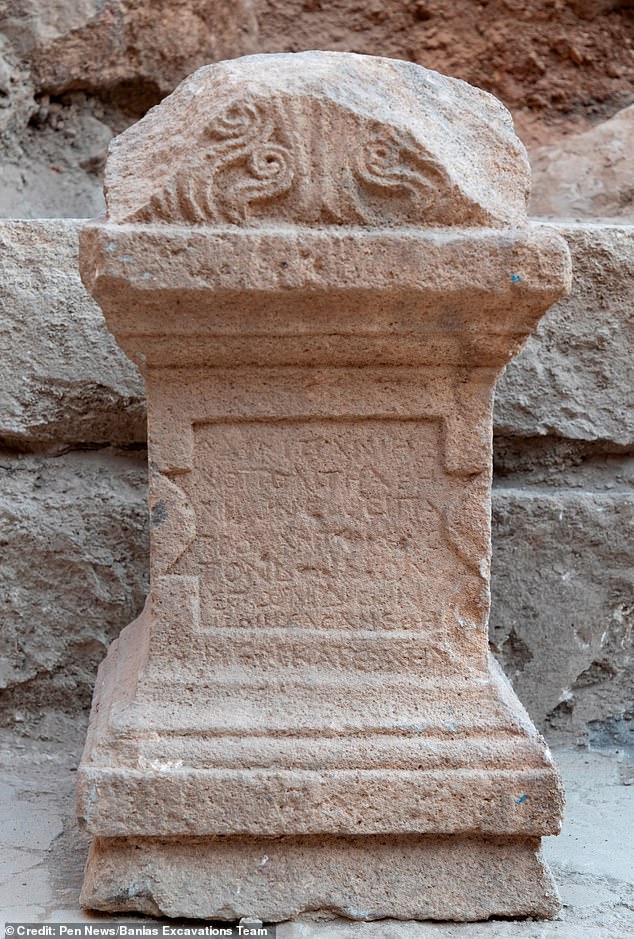 Photo shows a Roman altar dedicated to the God, Pan, found at the site which suggests the location had been used for religious purposes before the Christians arrived

She is said to have touched his cloak as he moved through a crowd, at which point she was instantly healed.

The subsequent Confession of Peter, when the apostle proclaims Jesus to be the messiah, might be even more important, with the revelation used by the Catholic Church to justify the papacy.

The Israel Nature and Parks Authority ordered the excavation of the site at Banias to allow for conservation and to develop the place for tourism.

‘Once conservation is over, everybody is welcome to come and visit,’ said Dr Erlich.

JESUS HEALING THE BLEEDING WOMAN: A MIRACLE IN THE GOSPELS OF MATTHEW, MARK AND LUKE

According to the gospels a women who had been bleeding constantly for 12 years touched Jesus’ cloak and was healed. 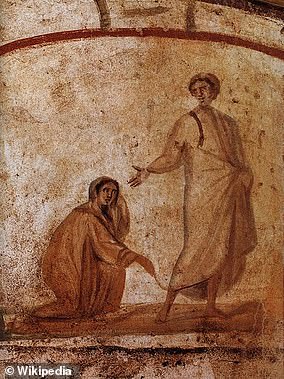 The miracle of the bleeding woman is depicted in Matthew, Mark and Luke

‘She had suffered a great deal under the care of many doctors and had spent all she had, yet instead of getting better she grew worse,’ the Bible claims.

‘When she heard about Jesus, she came up behind him in the crowd and touched his cloak, because she thought, “If I just touch his clothes, I will be healed.”’

Writings in Luke say her bleeding stopped immediately and she felt ‘all over her body’ she had been freed from her suffering.

Luke claims that Jesus turned to the crowd and said ‘who touched my clothes’ once he realised power had ‘gone out from him’.

‘Then the woman, knowing what had happened to her, came and fell at his feet and, trembling with fear, told him the whole truth. He said to her, “Daughter, your faith has healed you. Go in peace and be freed from your suffering.’

No specific details have been revealed about the condition of the women, but different translations use various phrases from ‘issue of blood’ and ‘flux of blood’ to being ‘haemorrhoissa’ – Greek for ‘bleeding woman’.

Biblical scholars suggest that as she was continually bleeding she may have been seen as ‘unclean’ and thus socially and religiously isolated.

Ancient historians placed the ‘miracle’ in the Roman city of Caesarea Philippi in the Golan Heights.