Was life on Earth kick-started by LIGHTNING? Bolts from the blue unlocked the phosphorus necessary for the creation of DNA, cells and bones, study claims

Lighting striking the surface of planet Earth billions of years ago may have unlocked the phosphorus necessary for the creation of DNA, cells and bones, a new study has revealed.

Researchers at Yale and the University of Leeds say the essential spark may have taken a quintillion – a number with 30 zeroes – lightning strikes over a billion years.

They say these ‘bolts from the blue unlocked the phosphorus necessary for the creation of biomolecules that would be the basis of life on the planet.’

Phosphorus is a key ingredient necessary for the formation of life – but it was not easily accessible on Earth billions of years ago, locked inside minerals.

The discovery can help scientists understand how life on Earth first formed and how it could still be forming on Earth-like planets throughout the universe. 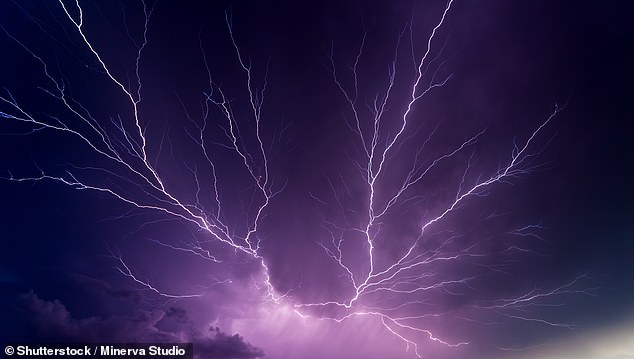 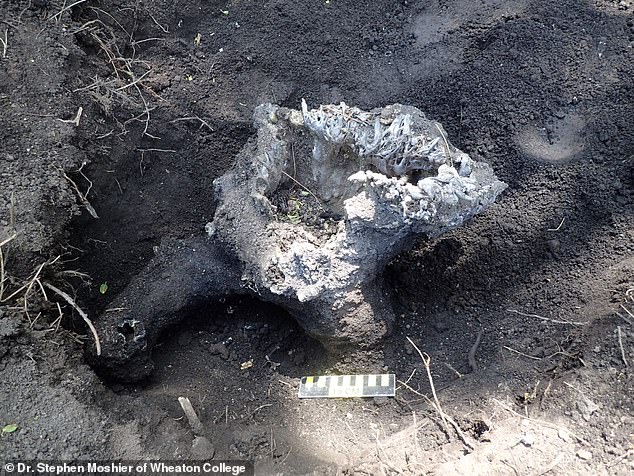 A photo taken during the excavation of the fulgurite in Glen Ellyn, IL, US. The main fulgurite trunk with one of its larger branches can be seen. Strikes on this released phosphorous

When this charge separation is large enough a violent discharge of electricity happens – also known as lightning.

Such a discharge starts with a small area of ionised air hot enough to conduct electricity.

This small area grows into a forked lightening channel that can reach several miles in length.

These charges passes from the positive end of the channel to the negative end another during a lightening flash, causing the charge to be released.

The question for researchers has been: How did Earth’s phosphorus get into a usable form to help create DNA, RNA, and other biomolecules needed for life?

The emergence of life on Earth was dependent on a precise cocktail of critical ingredients, one of which is bio-available or reactive phosphorus.

Scientists looked first at meteorites – chunks of space rocks such as asteroids and comets that fall down to the surface of the Earth.

The idea was that meteorites containing the phosphorus mineral schreibersite – which is soluble in water – crashed on Earth’s surface with enough frequency to create the conditions necessary for biological life.

The drawback to the meteorite theory, however, had to do with frequency – more space rocks would be needed than were thought to have fallen to Earth at the time.

During the period when life is thought to have begun, anywhere from 3.5 to 4.5 billion years ago, the frequency of meteorite collisions on Earth plummeted.

But there was another source of the phosphorus found in schreibersite.

According to lead author Benjamin Hess, schreibersite can also be found in certain glasses – called fulgurites – that form when lightning strikes the ground.

The resulting glass from the lightning strike contains some of the phosphorus from surface rock, but in soluble form.

The team created a computer model to find out how many lightning strikes hit the Earth at the time life first started to appear.

Hess and co-authors Sandra Piazolo and Jason Harvey from the University of Leeds estimated that early Earth saw one to five billion lightning flashes every year.

Of those early flashes of lightning generated on the planet, anywhere from 100 million to one billion would have struck the ground annually.

Today the Earth’s surface is hit by lighting about 560 million times per year, the team behind the new study estimated.

That would add up to 0.1 to 1 quintillion strikes over the course of a billion years hitting the planet – and quite a bit of usable phosphorus produced as a result.

Using a suite of spectroscopic techniques, they find schreibersite within the glassy minerals formed by lightning strikes on certain clay-rich soils.

By estimating the amount of schreibersite that might have been produced by each strike, and the suitable land area on the early Earth, they calculate that lightning strikes could have accounted for between 110 and 11,000kg of phosphorus per year. 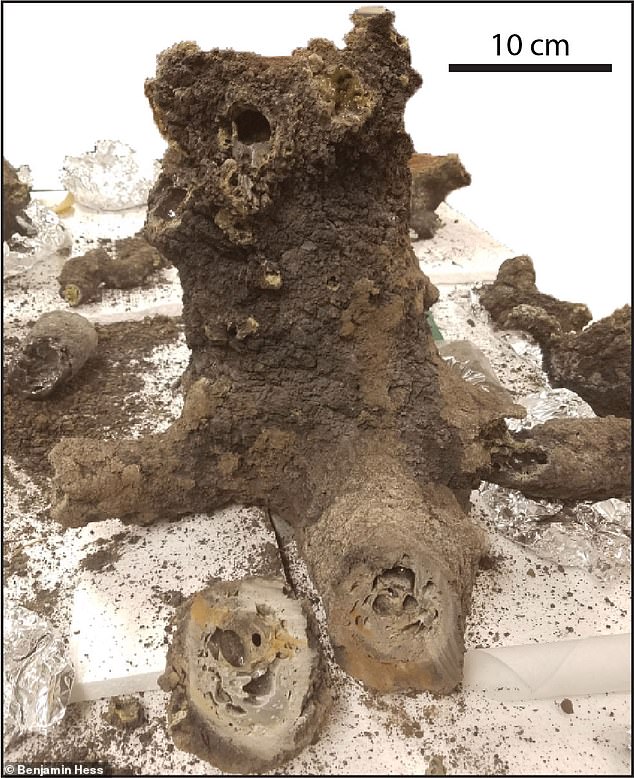 The main body or “trunk” of the studied fulgurite, or, glass created from a lightning strike. The top of the trunk was exposed at the surface where the lightning strike made contact with the ground 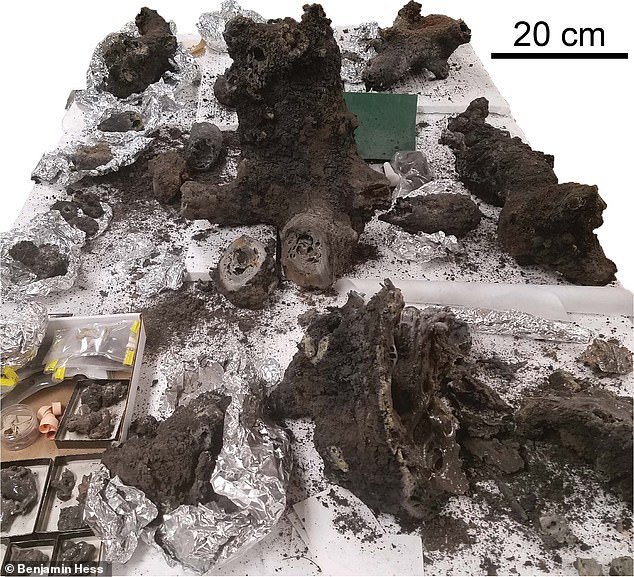 All excavated pieces of the fulgurite analysed in this study. The discovery can help scientists understand how life on Earth first formed and how it could still be forming on Earth-like planets throughout the universe

Whilst that is a large range, even the low end is enough to potentially fuel the first lifeforms, and a quantity that may have eventually exceeded meteor strikes.

The lightning strike theory has other advantages as well, the researchers noted, explaining that this includes the fact the number of strikes would remain constant.

Unlike the number of meteorite collisions, which vary based on a number of external factors – lighting strikes would be consistent and predictable.

In addition, lightning strikes were likely to be most prevalent on land masses in tropical regions, providing more concentrated areas of usable phosphorus.

‘It makes lightning strikes a significant pathway toward the origin of life,’ Hess said.

The new study appears in the journal Nature Communications.

HOW IMPORTANT IS PHOSPHOROUS TO LIFE ON EARTH AND HOW DID IT GET HERE?

Though nowhere near as abundant on Earth as carbon, Hydrogen or Oxygen, phosphorous is one of the key elements to life on our planet.

It helps form the backbone of the long chains of nucleotides that make up DNA – the building blocks of biological life as we know it.

Phosphorous is also vital to cell membranes and the cell energy-carrying molecule ATP.

Phosphorous likely came to Earth aboard meteorites billions of years ago.

The meteorites are believed to have contained a phosphorus-bearing mineral called schreibersite.

Scientists recently developed a synthetic version of schreibersite that reacts chemically with organic molecules, showing its potential as a nutrient for life.