The natural reproductive cycles of corals living in coastal regions are being threatened by artificial light pollution, a study has warned.

Many marine organisms — particularly colonies of coral — rely on the natural cycles of sunlight and moonlight to regulate their behaviour and biological processes.

However, artificial light spilling into the ocean from street lamps, billboards, buildings, etc. are throwing off these internal clocks.

Researchers from Isreal found that coral exposed to LED lighting are spawning at the wrong time — preventing them from successfully reproducing.

Based on their findings, the team created a map of the oceans that are most affected by artificial light — including the Caribbean Sea and the Pacific and Indian Oceans. 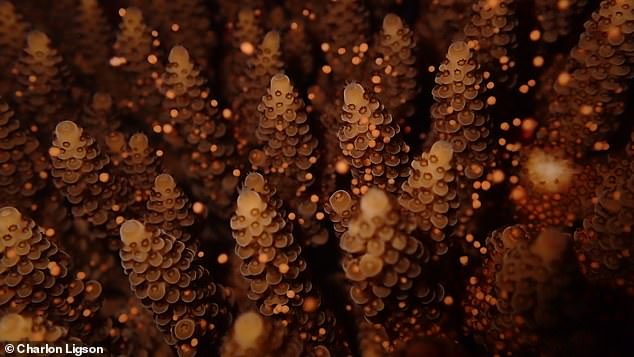 The reproductive cycles of corals living in coastal regions are being threatened by artificial light pollution, a study has warned. Pictured, spawning corals release sex cells at night

‘The daily light-dark cycle arising from the earth’s rotation is centrally important to biology,’ said paper author and biologist Oren Levy of the Bar-Ilan University in Israel.

‘Due to the high rate of urban development in marine coastal areas around the world, light pollution could further threaten coral communities’ populations — which are already under severe degradation.’

Corals reproduce by releasing sex cells called gametes — eggs and sperm — into the surrounding water at the same time in a process known as ‘external fertilisation’.

A combination of biological and environmental factors are supposed to act to ensure synchronised spawning — and that neither gamete is discharged prematurely.

In their study, Professor Levy and colleagues studied two coral species from the Indo-Pacific Ocean — Acropora digitifera and Acropora millepora.

They transferred a total of 90 coral colonies into outdoor tanks, filled with seawater, that were exposed to both natural sunlight and moonlight.

The team next divided the corals into three groups — each containing 15 colonies from each of the two species — with one group exposed only to the natural light, one to warm LED lamps and one to cool LED illumination.

The researchers also tracked the coral’s monthly chlorophyll fluorescence yield — which allowed them to get an indication of each colony’s overall health.

The team found that in the the corals exposed to LED light, the production of eggs and sperm — so-called ‘gametogenesis’ — and the release of such cells were both delayed in comparison to the corals left under natural light alone.

The findings indicate that solar and lunar light cycles are likely essential in how the corals schedule their synchronised sex cell discharges.

‘They exhibited asynchrony in the reproductive state which was reflected in the number of oocytes (egg cells) per polyp, gametogenesis and gamete maturation.’

‘This was further reflected at the population level where only corals exposed to natural light cycles succeeded in spawning synchronisation.’

‘Light treatment with both cold and warm LEDs had a similar impact on the gametogenesis cycle.’ 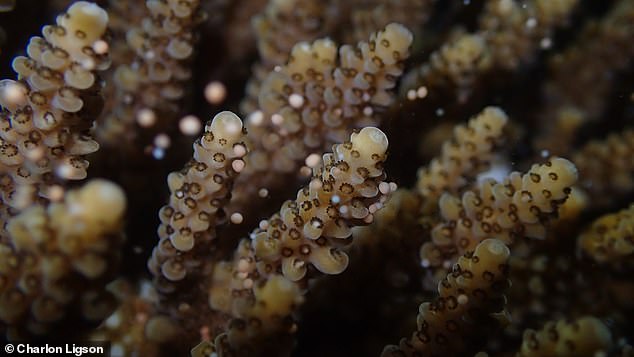 Corals reproduce by releasing sex cells called gametes — eggs and sperm — into the surrounding water at the same time (as pictured) in a process known as ‘external fertilisation’. A combination of biological and environmental factors are supposed to act to ensure synchronised spawning — and that neither gamete is discharged prematurely

Based on their findings, the team created a first-of-its-kind global map highlighting the areas most threatened by artificial light.

The Gulf of Aqaba in the Red Sea, for example, is at least 47 per cent brighter at night than it would be naturally — and up to 60 times brighter in some places.

Rapid population growth in coastal regions is driving an increase in the amount of LED lighting affecting the oceans, the researchers said.

LED lighting gives off a lot of blue light, which can penetrate deeper into the water.

Conservation plans for coral reefs located near urban areas must consider the impact of artificial light if they are to be effective, the researchers added.

With their initial study complete, the team are looking to see if some corals might be more resistant to light pollution than others — and, if so, why this is the case.

LIGHT POLLUTION IS ARTIFICIAL LIGHT THAT IS EXCESSIVE, OBTRUSIVE AND WASTEFUL

Light pollution, also known as photopollution, is the presence of anthropogenic light in the night environment.

With more than nine million streetlamps and 27 million offices, factories, warehouses and homes in the UK, the quantity of light we cast into the sky is vast.

While some light escapes into space, the rest is scattered by molecules in the atmosphere making it difficult to see the stars against the night sky. What you see instead is ‘Skyglow’.

The increasing number of people living on earth and the corresponding increase in inappropriate and unshielded outdoor lighting has resulted in light pollution—a brightening night sky that has obliterated the stars for much of the world’s population.

Most people must travel far from home, away from the glow of artificial lighting, to experience the awe-inspiring expanse of the Milky Way as our ancestors once knew it.

Light pollution is excessive and inappropriate artificial light. While some light escapes into space, the rest is scattered by molecules in the atmosphere making it difficult to see the stars against the night sky. What you see instead is ‘Skyglow’

The negative effects of the loss of this inspirational natural resource might seem intangible.

But a growing body of evidence links the brightening night sky directly to measurable negative impacts on human health and immune function, on adverse behavioural changes in insect and animal populations, and on a decrease of both ambient quality and safety in our nighttime environment.

Astronomers were among the first to record the negative impacts of wasted lighting on scientific research, but for all of us, the adverse economic and environmental impacts of wasted energy are apparent in everything from the monthly electric bill to global warming.