A model of Leonardo Da Vinci’s mechanical lion has gone on display in a museum in Paris.

The life-size creation, which measures 6ft7ins high and 9ft10ins long, has been put in place as a tribute to the great Italian inventor.

Da Vinci’s original beast was made of wood and was elaborately designed enough to be able to walk.

It was commissioned by Pope Leo X to be created for Francois I, a king of France in the 16th Century.

The wooden beast will be on show at the Italian Cultural Institute in the French city for the next month. 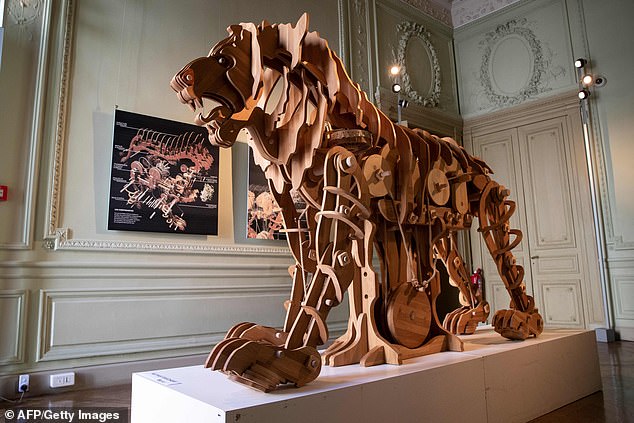 A model of Leonardo da Vinci’s animatronic lion, which he created in the 16th Century, will be on display in Paris for a month in homage to the Renaissance master

Da Vinci is perhaps best known for his Mona Lisa painting, his conceptions of flying machines, which were unheard of at the time, and his detailed drawings such as the Vitruvian Man.

His animatronic lion was created to entertain the French monarchy and even had an automated chamber in its chest out of which a fleur-de-lys – a former coat of arms in France – was produced for the king.

The reconstruction on show in the Italian Cultural Institute has a body made of wood and a metal mechanism inside.

The Renaissance master’s original creation is long-lost but its memory has lived on in recreations – another one was created in France in 2009.

One went on show there in the town of Amboise, where Da Vinci lived in his twilight years and eventually died in 1519.

At the time, the host of that exhibition, Francois Saint Bris, told Reuters: ‘He knew how to satisfy an audience with amazing creations. He was the George Lucas of his time,’ referring to the creator of the Star Wars movies.

The original lion model was created in 1515, just four years before Da Vinci’s death, to celebrate a new alliance between Florence and France. 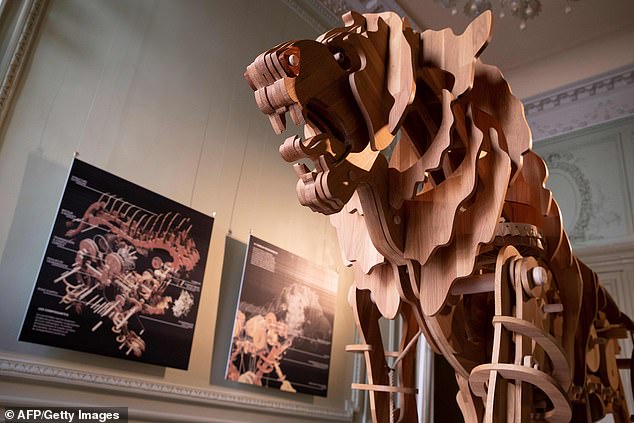 The lion was originally created for Francois I, the French king at the time, and had a self-opening chamber in its chest in which Da Vinci placed a fleur-de-lys, a former French coat of arms 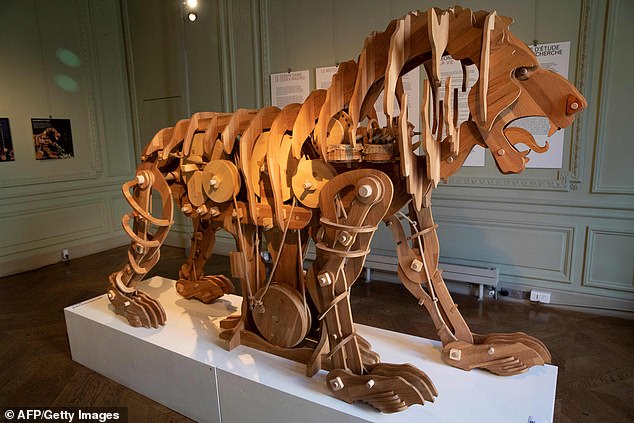 A similar lion then appeared at a party organised in honour of King Francois two years later, although it’s unknown whether it was the same one.

The King and Da Vinci’s relationship continued after the creation of the wooden beast and the Francois was known to be an admirer of his work.

He designed palaces and canals, sketched plants and animals and organised royal festivities in the company of the monarch.

And in 1518, he amazed the audience of a play by recreating the night sky above the stage, complete with stars and planets.

WHO WAS LEONARDO DA VINCI?

He has been attributed with the development of the parachute, helicopter and tank.

After being born out of wedlock the visionary he worked in Milan, Rome, Bologna and Venice.

His most recognisable works include the Mona Lisa, the Last Supper, Vitruvian Man.

Another piece of artwork, dubbed the Salvator Mundi, sold for a world record $450.3 million (£343 million) at a Christie’s auction in New York in 2017.