The largest ever map showing where dark matter can be found throughout the universe has been created by astronomers using the light from 100 million galaxies.

Using artificial intelligence to analyse images of the shape and light from galaxies, astronomers from University College London and the École Normale Supérieure in Paris created a map of the invisible matter throughout the universe.

Dark matter makes up about 80 per cent of all matter in the universe, but isn’t directly visible, spotted instead through its interaction with other objects.

Working as part of the international Dark Energy Survey (DES), they looked for light travelling to Earth from distant galaxies being distorted by the dark matter.

The team says an accurate map showing the spread of dark matter can one day help answer questions including what the universe is made of and how it has evolved. 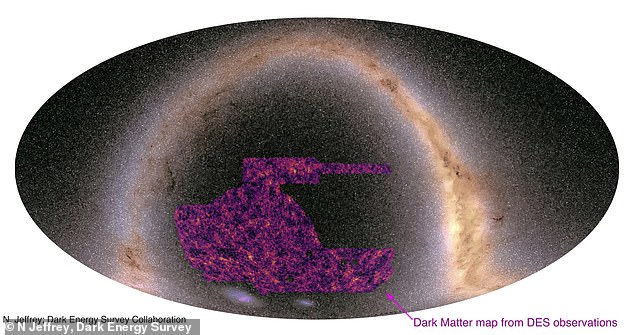 WHAT IS THE UNIVERSE MADE OF?

We might all be starstuff, but what proportion of the universe is matter?

Not very much, based on the latest evidence from analysis of the cosmic background radiation – the leftover light from the Big Bang.

The universe is approximately:

Unfortunately the nature of both dark matter and dark energy are unknown, but they can be detected through their impact on known matter.

On a universal scale, the amount of known matter is minuscule, according to the authors of a 2020 study that measures all known matter.

The University of California, Riverside team found that gas, dust, stars, galaxies and planets make up just 20 per cent of all matter.

If all of the matter in the universe were spread out evenly across space – it would have ‘a density equal to that of about six hydrogen atoms per cubic metre’.

‘However, since we know 80 per cent of matter is actually dark matter, in reality, most of this matter consists not of hydrogen atoms but rather of a type of matter which cosmologists don’t yet understand,’ said lead author Mohamed Abdullah.

As the invisible matter curves space-time around it, astronomers can map its existence by studying the light arriving at Earth from distant galaxies.

If the light has been distorted, this means there is matter in the foreground, bending the light as it comes towards us, the team explained.

There is a significant amount of data involved in tracking light from 100 million galaxies, each appearing as spots of light no more than 10 pixels.

So the team fed the data into a machine learning algorithm, using artificial intelligence to spot patterns that resemble expected distortion in the light.

They then placed the locations dark matter was found on a map – showing it in the foreground of the observed galaxies.

If this matter was visible to the naked eye it would cover an area equivalent to a quarter of the sky of Earth’s Southern Hemisphere.

It is described in a new paper posted on the DES website and to be published in the Monthly Notices of the Royal Astronomical Society.

Jeffrey said most of the matter in the universe is dark matter.

‘It is a real wonder to get a glimpse of these vast, hidden structures across a large portion of the night sky,’ he said.

‘These structures are revealed using the distorted shapes of hundreds of millions of distant galaxies with photographs from the Dark Energy Camera in Chile.’

They found that there were similar patterns in dark matter as you see in visible matter – a web-like structure with dense clumps separated by vast empty voids.

‘Observing these cosmic-scale structures can help us to answer fundamental questions about the Universe,’ he said.

‘It tells us about the origin of the universe, where it is heading, where it came from,’ Jeffrey told MailOnline, adding you can also look to combine interactions between real matter and dark matter throughout the universe.

The idea of there being ‘more to the universe than we can see’ was first proposed in the 1930s, and since then astronomers have tried to explain the invisible.

Dark matter, like dark energy, remains mysterious, but its existence is inferred from galaxies behaving in ways not predicted.

For instance, the fact that galaxies stay clustered together, and that galaxies within clusters move faster than expected is one way to detect this mysterious matter.

Co-author Professor Ofer Lahav from UCL, who is also the chair of the DES UK consortium said visible galaxies form in the densest regions of dark matter. 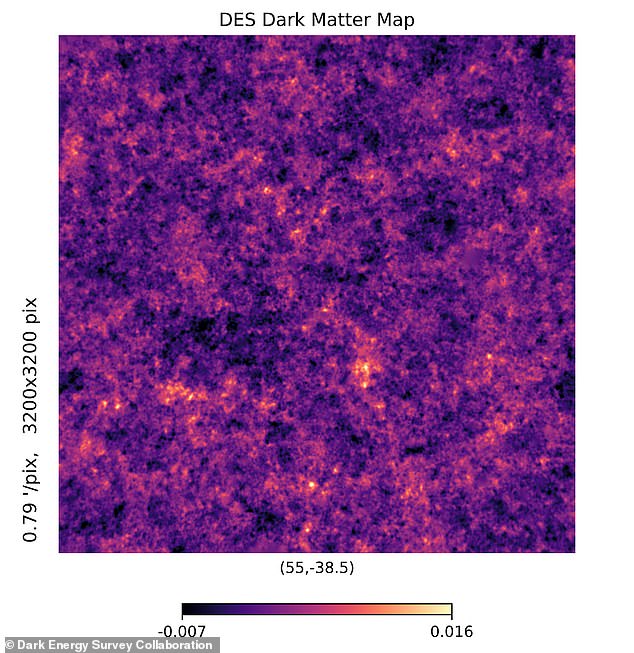 Dark matter is a hypothetical substance said to make up roughly 31 per cent of matter in the universe.

‘When we look at the night sky, we see the galaxy’s light but not the surrounding dark matter – like looking at the lights of a city at night,’ he explained.

‘By calculating how gravity distorts light, a technique known as gravitational lensing, we get the whole picture – both visible and invisible matter.

‘This brings us closer to understanding what the Universe is made of and how it has evolved. It also shows the power of artificial intelligence methods to analyse one of the largest data sets in astronomy.’

Their new map projects a 3D space spanning seven billion light years, on to a 2D representation, but future versions will create a 3D vision of the universe.

Jeffrey told MailOnline that dark matter is a sort of scaffolding, or glue, that binds galaxies together.

‘It is the largest force of gravity within the cosmic web that surrounds galaxies and binds them together.’

People think that dark matter is a particle we haven’t yet observed on Earth, that has mass and interacts with gravity but doesn’t interact in any other way we can detect on Earth or hold in a lab.

One of the things the map has taught astronomers is the size of the ‘voids’ within the map, which Jeffrey says it an ‘absence of matter.’

‘People are interested in the voids, their shape and distribution of matter within it as one way to see if Einstein’s theory of relativity was wrong is to look for voids, areas of the universe with less stuff.

‘Maybe it is in areas like this that gravity will be different and physics will work differently,’ he told MailOnline. 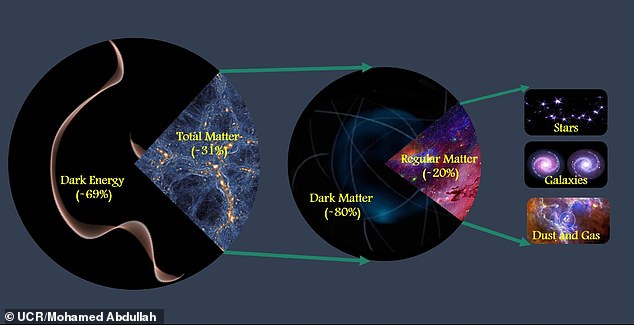 Dark matter makes up about 80 per cent of all matter in the universe, but isn’t directly visible, spotted instead through its interaction with other objects

Co-author Dr Chihway Chang, University of Chicago, said: ‘These maps will also enhance our understanding of the connection between dark matter and galaxies.’

The Dark Energy Survey collaboration involves researchers from around the world measuring the composition and growth of the universe to ‘better understand dark matter and dark energy’ driving the expansion of the universe.

Over the last six years the team have catalogued hundreds of millions of galaxies thanks to photos of the sky from the 570-megapixel Dark Energy Camera mounted on a telescope at the Cerro Tololo Inter-American Observatory in Chile.

Dr Marco Gatti, of the University of Pennsylvania, a co-lead author of the paper on the newly created map, said the DES images provide the ‘most precise ever look at the Universe’s evolution over the last seven billion years.’ 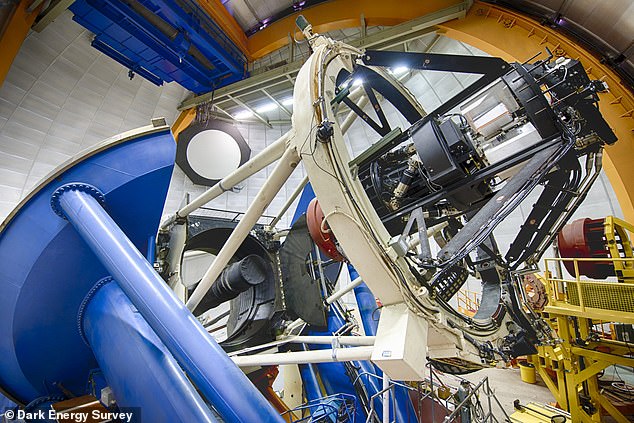 New analysis of the first three years of the survey by DES scientists suggests that matter is distributed throughout the Universe in a way that is consistent with predictions in the standard cosmological model.

But the analysis found hints, as with previous surveys, that the Universe may be a few per cent smoother than predicted, based on the study of light from the Big Bang.

Dr Pablo Lemos, who carried out the analysis to reveal a ‘smoother universe’ said it would be exciting to find a contradiction between galaxy surveys and a study of the big bang light, also known as the cosmic background radiation.

Contradictions between these two, he said, ‘would provide hints of new physics.’

‘This observed difference in the clustering of matter could be one such contradiction, but we will need more data to confirm it.’ 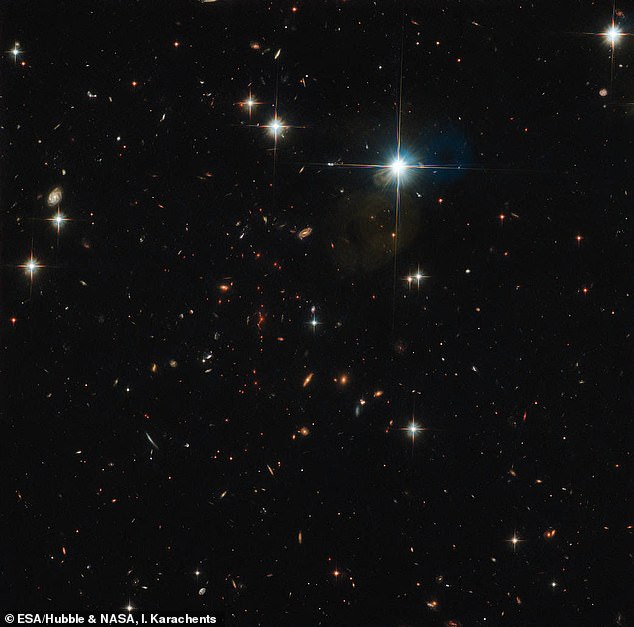 Jeffrey told MailOnline that they take what the universe was like 13 billion years ago, what we know today and the map suggests matter is ‘less clumpy’ than predictions based purely on the background radiation would suggest.’

‘This hint has been seen in earlier experiments, which is what makes the dark energy survey findings exciting to cosmologists.’

Current evidence obtained through analysing the cosmic background radiation suggests the universe at present is made up of approximately five per cent ordinary, visible matter, 25 per cent dark matter, and 70 per cent dark energy.

DES Director and spokesperson Professor Rich Kron, who is a Fermilab and University of Chicago scientist, said the goal was to illuminate the natures of dark matter and energy by studying how the competition between them shapes the universe.

The findings have been published in a paper on the Dark Energy Survey website.

Dark matter: The mysterious substance that makes up 85% of the universe that scientists cannot confirm

Dark matter is a hypothetical substance said to make up roughly 85 per cent of the universe.