J. Michael Lane, a globe-trotting epidemiologist who waged a 13-year war against the scourge of smallpox and led the final drive for its global eradication in 1977, when the last known vestige of the disease was snuffed out in East Africa, died on Wednesday at his home in Atlanta. He was 84.

His wife, Lila Elizabeth Summer, said the cause was colon cancer.

In his years of writing and lecturing on smallpox, Dr. Lane drew a vivid portrait of that unseen enemy, one of humanity’s oldest and most terrifying infectious diseases. Perhaps emerging from a rodent virus 10,000 years ago, it periodically swept around the world over the centuries, killing or blinding a third of its victims: hundreds of millions in Europe, Asia, Africa and the Americas, 80 percent of the Native Americans who caught it from European invaders, and the multitudes and monarchs of many lands.

Its traces were found in the 3,000-year-old mummy of Pharaoh Ramses V of Egypt. Presidents George Washington, Andrew Jackson and Abraham Lincoln survived it. And in the 20th century it was blamed for 300 million deaths before it was finally wiped out in an international campaign led by public health officials in the United States and the Soviet Union.

Smallpox was declared dead by the World Health Organization in 1980 after a global search found no evidence of it in nature more than two years after it had infected its last human being in nature, a hospital cook in Somalia by the name of Ali Maow Maalin, in 1977. (Technically, its last victim, Janet Parker, was a medical photographer in a British hospital who had apparently become infected in a lab accident and died in 1978.) Today, four decades later, no verified smallpox case has surfaced anywhere, and historians call its extermination one of humanity’s greatest public health achievements.

As in any war, as Dr. Lane was quick to acknowledge, the campaign to obliterate smallpox had its generals. Besides himself, they included Drs. D.A. Henderson, William H. Foege and J. Donald Millar, all epidemiologists and former directors of the smallpox eradication program of what is now the Centers for Disease Control and Prevention.

But the war also had its army of thousands of foot soldiers who identified smallpox outbreaks, and who did the frontline work of quarantining contagious sufferers and vaccinating their contacts and other potential victims. 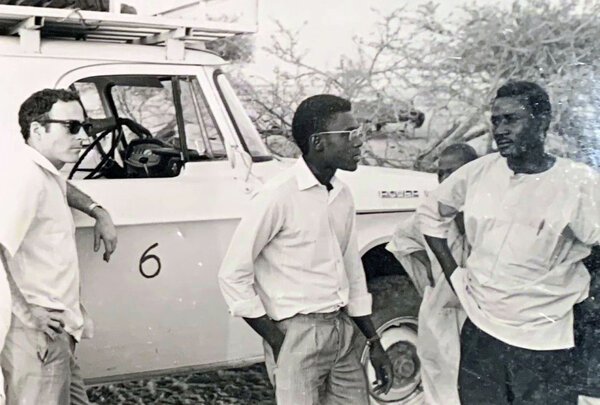 The son of a lawyer who championed civil rights, Dr. Lane, after completing his medical training in the early 1960s, joined the C.D.C. and, starting in 1964, devoted his entire working life to the crusade against smallpox and other infectious diseases, and against famine in impoverished countries.

He traveled to West and Central Africa, India, Pakistan, Bangladesh, Indonesia and other countries to combat outbreaks, to create vaccination programs and to teach techniques of epidemic intelligence for tracking and killing variola, the smallpox virus.

He became an expert on the complications of smallpox vaccinations. And while he believed correctly that vaccinations would be the ultimate weapon against the disease, he co-wrote a report, published in The New England Journal of Medicine in 1969, calling for the end of smallpox vaccinations in the United States because the side effects — fatal in roughly one case per million — outweighed the benefits. A ban on 13 million routine smallpox vaccinations in this country was imposed in 1972. (Newer, purportedly safer versions of the vaccine have been made in case of another outbreak, and an anti-smallpox drug has since been licensed.)

By 1973, when Dr. Lane became the last director of the C.D.C.’s smallpox eradication bureau, the disease had long since been eradicated in the United States. But it remained an urgent international concern, with outbreaks largely in the rural areas of many countries.

The C.D.C.’s vaccine was not a breakthrough of modern chemistry but a variation on a discovery in 1796 by Dr. Edward Jenner, an English doctor, who experimentally infected a boy with cowpox from a blister on a milkmaid’s hand. Cowpox, a mild disease, protected those who received it from contracting smallpox — and the modern era of vaccines was born.

Under the aegis of the World Health Organization, the C.D.C.’s eradication program, begun in 1967 when vaccines were in short supply, used the tactic of “ring vaccination,” focusing on villages with known victims, who were quarantined, and vaccinating their families and recent contacts. Teams also vaccinated in market towns and at festival sites, where people gathered in large numbers.

The caseloads fell dramatically. By 1969, 100 million people in Africa had been vaccinated. Verified smallpox infections thereafter dwindled rapidly, until the last case of naturally transmitted smallpox was recorded in Somalia in 1977. Under World Health Organization rules, a disease may be pronounced dead only after two years of investigation without further verified cases having been found.

That goal was more than met on May 8, 1980, when the World Health Assembly, the health ministers of 190 countries, certified that smallpox had been extinguished globally. There were a few headlines, but the milestone went largely unheralded. Scientists toasted the occasion at the W.H.O. in Geneva and at the C.D.C. in Atlanta. But it was an anticlimax for Dr. Lane and his colleagues.

“Obviously we were happy and elated,” Dr. Lane said in July in a phone interview for this obituary from his home, where he was in hospice care. “But it was expected. We had watched the curve go down in the early ’70s, and the official announcement wasn’t a big deal. What was a big deal was successfully getting rid of the disease in 1977.”

John Michael Lane was born in Boston on Feb. 14, 1936, to Eileen O’Connor and Alfred Baker Lewis II. Their subsequent marriage was her first and his second, and the surname Lane was created by his mother and conferred upon John and an older brother, Roger. John had another brother, Stephen Lewis, as well as a half brother, Alfred Baker Lewis III, and two half sisters, Helena Lewis and Caroline Lewis, the children of Mr. Lewis II’s first marriage.

John’s father, a Socialist with inherited wealth, was a treasurer of the national N.A.A.C.P. and spoke on racial equality at Black churches and colleges in the South in the 1940s. He and his wife sponsored Jewish refugees from Germany during World War II. She was a director of Planned Parenthood and the Y.W.C.A.

When the boy, called Mike, was 6, the family moved to Greenwich, Conn., where he graduated from the private Brunswick School in 1952. He earned a bachelor’s degree in English from Yale in 1957, a medical degree from Harvard in 1961 and a master’s in public health epidemiology from the University of California, Berkeley, in 1967. After interning at Bellevue Hospital in New York, he joined the C.D.C. in 1963 and within a year was assigned to the smallpox fight.

Dr. Lane’s marriage to Carolina Hernandez, in 1969, ended in divorce in 1998. He and Ms. Summer were married that year.

In addition to his wife, he is survived by a daughter from his first marriage, Cynthia Michelle Edward, and a stepdaughter, Annabel Moore, as well as his brother, his half brother and half sisters, and two grandchildren.

Following the 2001 terrorist attacks, he trained Army personnel in bioterrorism defense strategies. Since retiring in 2002, he had lectured and written articles for scientific journals on smallpox, vaccinations and bioterrorism. He received many awards, including the Public Health Service’s Commendation Medal.

Dr. Lane was for many years a bird-watcher, scuba diver and backpacker. At 79, he hiked from Atlanta to Seattle, much of the trek through national parks. But he was, above all, a smallpox warrior.

“I worked with Mike for a half-century,” Dr. Foege recalled for this obituary. “He was extremely important to the success of the smallpox eradication program. He worked in many countries, and ran the whole program from Atlanta. He figured out the complications of administering the vaccine. And he was a great teacher.”