Scientists in Naples claim to have created the perfect yeast-free pizza by ‘blowing bubbles’ in dough.

This unconventional method created bubbles of carbon dioxide, just like yeast does in normal pizza dough.

Developing a yeast-free pizza is ‘an important challenge’ for bakers and yeast-intolerant crust enthusiasts across the world, the experts say. 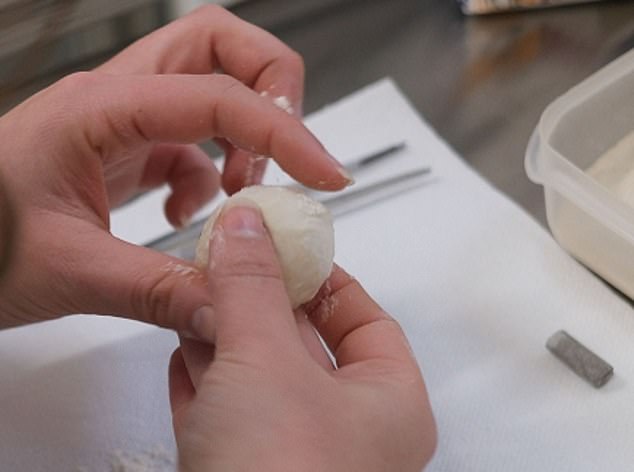 Dissolving gas into dough at high pressures can create ideal rise without yeast, according to experts in Naples. They used small pieces of dough to test the rise with and without yeast

WHY DOES PIZZA DOUGH NEED YEAST?

Until now, yeast has been one of pizza’s key ingredients.

It is the primary leavening agent in dough, which means it’s what causes the pizza dough to rise.

The researchers, from the University of Naples Federico II, said taste tests of the yeast-free dough were successful.

They now want to purchase a larger, food-grade autoclave that will make full-sized pizzas in future experiments.

They hope to see their method used in pizza shops, providing an alternative option for those with a yeast allergy, which can prove fatal if it triggers anaphylaxis.

One of the study authors, Ernesto Di Maio, is himself allergic to yeast.

Normally, yeast produces bubbles via a biochemical process, causing dough to rise and develop into a light and airy base for our pizzas.

Without that yeast, it is difficult to make pizzas with the same characteristic taste and texture.

The team prepared their dough by mixing water, flour, and salt and placing it in a hot autoclave, an industrial device designed to raise temperature and pressure.

Yeast is a fungus which is used as an active ingredient in many products, especially baked goods.

From pizzas to loaves of bread, yeast is what causes dough to rise.

A yeast allergy or intolerance is a hypersensitivity to a protein found in yeast.

Autoclaves are usually used for sterilization of materials such as plastics for healthcare or industrial applications, rather than cooking.

‘The idea of approaching food samples with the same technologies and knowledge used for thermoplastic polymers was surprisingly successful,’ said study author Rossana Pasquino at the University of Naples Federico II.

From there, the process is like the one used to produce carbonation in fizzy drinks – the release of carbon dioxide from bubbles into the atmosphere.

In an autoclave, the gas is dissolved into the dough at high pressure, and bubbles form in the dough as pressure is released during baking.

However, the scientists had to be cautious with the pressure release, as compared to fizzy drinks, pizza dough doesn’t respond as well to an abrupt pressure change.

‘The key to the process is to design the pressure release rate not to stress the dough, which likes to expand gently,’ said study author Ernesto Di Maio. 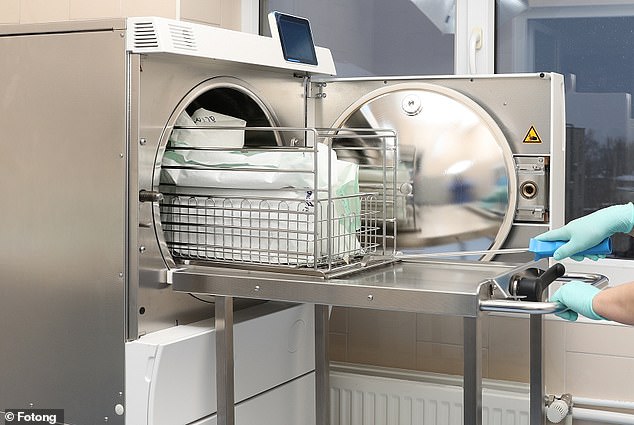 The authors then evaluated their dough with rheology, a field of science that looks at how liquids and gases flow.

Fine-tuning the release of pressure through rheological analysis made it possible to gently inflate bubbles to the desired extent.

The researchers used small blobs of dough to test the rise both with and without yeast and compare the results.

‘We mainly studied how dough behaves with and without yeast – how the softness changes with leavening, and how the dough responds to a temperature program during baking,’ said Pasquino.

‘This was fundamental to designing the pressure protocol for the dough without yeast.’

Aside from pizza dough, the autoclave method could be applied to other traditionally leavened products like bread, cakes and snacks.

The new study has been published today in the journal Physics of Fluids.

A vegan and environmentally-friendly egg white has been created using fungus, which could provide an alternative to intensive chicken farming.

Researchers in Finland created ovalbumin (the primary protein in egg white) out of Trichoderma reesei, a species of fungus known to degrade clothing.

Currently, one of the most widely-used vegan alternatives to egg white at home and in restaurants is aquafaba – the liquid leftover from cooked chickpeas.

However, aquafaba has to be whipped fiercely for over 20 minutes to achieve fluffy peaks, while this new replacement hold its shape and ‘has excellent foaming properties’.

Trichoderma reesei has already been used by scientists for producing self-healing concrete, industrial enzymes and the creation of stonewashed jeans.