La Palma volcanic eruption seen from SPACE: Astronaut on board the ISS shares incredible photo of plumes of bright orange lava against the blackness of the surrounding Atlantic Ocean

The volcanic eruption in La Palma has been photographed from space, revealing the bright orange lava set against the blackness of the Atlantic Ocean.

It was taken by French astronaut Thomas Pesquet as the station, orbiting 250 miles above the Earth, passed over the Canary Island on Wednesday.

The eruption began on Sunday afternoon, forcing the evacuation of 6,000 people from the path of the flowing rivers of molten lava spewing from the volcano.

More than 350 homes have been destroyed and significant damage has been caused to a banana plantation, schools and wider island infrastructure. 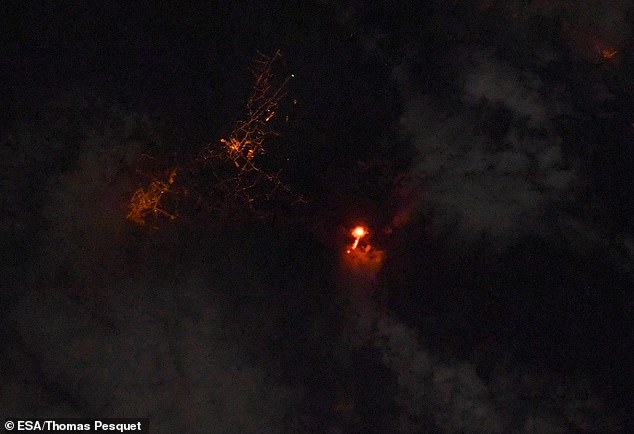 The volcanic eruption in La Palma has been photographed from space, revealing the bright orange lava set against the blackness of the Atlantic Ocean 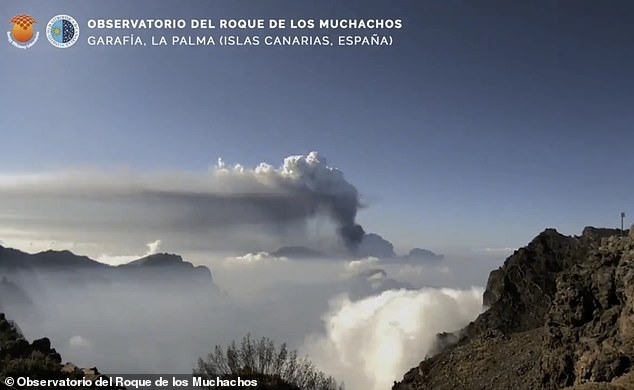 La Palma is famous in the science world for the more than 20 astronomical telescopes sitting on its high hills, operated by dozens of different nations

The Cumbre Vieja is a mountain range and an active volcano on the island of La Palma in the Canary Islands, Spain.

It is known locally as ‘old peak’, with several volcanic craters on the summit.

The latest eruption started on September 19, 2021 and is expected to continue for weeks.

There is some fear that the Cumbre Vieja may be on the edge of collapse.

If this happens the western flank of the volcano would slide down westwards into the Atlantic ocean.

This would lead to strong earthquakes across La Palma while it was sliding.

Once it reached the sea it would create a mega-tsunami with a wave rapidly moving westward in the Atlantic.

This would force the wave out towards the US, Bahamas and the Caribbean.

They would get smaller as they cross the Atlantic but could be up to 50 metres as they hit the US east coast.

The new image, shared on Twitter by Pesquet who is currently serving his second tour on the ISS, highlights the drama of eruption.

He said: ‘The La Palma volcano in eruption. Set against the blackness of the surrounding Atlantic Ocean the bright orange glow is even more impressive.’

La Palma is famous in the science world for the more than 20 astronomical telescopes sitting on its high hills, operated by dozens of different nations.

Among them is the Swedish Solar Telescope, operated by Stockholm University, situated on the northern part of the island.

The Cumbre Vieja volcanic eruption happened on the south part of La Palma, so the staff and telescope were safe – and even captured the plume of the eruption.

Another observatory was able to capture a timelapse video of the plume forming from the volcano far below them using webcams on the observatory.

It seems the eruption is still ongoing, almost a week after the first expulsion, with loud bangs unnerving locals and sending shockwaves echoing through hills.

The explosions around the volcano’s mouth hurled molten rock and ash over a wide expanse today. As a precaution, emergency services pulled back from the area.

The lava destroyed almost 400 buildings on the western side of the island, home to nearly 85,000 people, a European Union monitoring program said.

It said the lava stretches over 20,000 square feet and has blocked 9 miles of roads, causing islanders who make a living from farming and tourism to lose their livelihoods.

The government of la Palma island said officials had recorded 1,130 quakes in the area over the past week as the Cumbre Vieja volcanic ridge shook with blasts of lava.

On a visit to La Palma, Spanish Prime Minister Pedro Sánchez announced a package of measures to help get the island back on its feet and ‘rebuild lives.’

The Spanish government will provide aid for rebuilding homes and public infrastructure, such as roads, irrigation networks and schools, as well as relaunching the island´s tourism industry, Sánchez said. 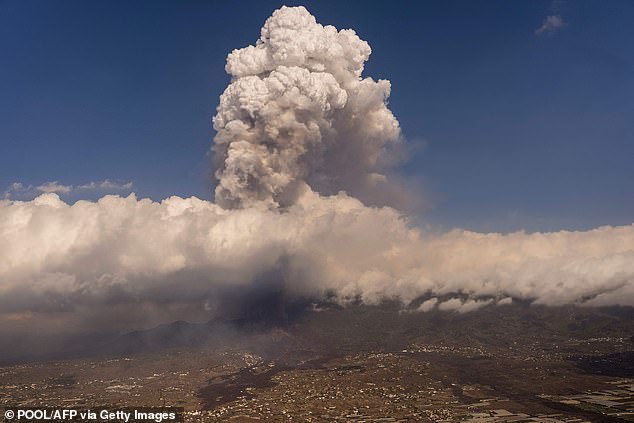 The government of la Palma island said officials had recorded 1,130 quakes in the area over the past week as the Cumbre Vieja volcanic ridge shook with blasts of lava

He did not say how much money would be made available, but said a Cabinet meeting next week would provide more details.

The blasts are sending ash up almost 15,000 feet into the air, the Guardia Civil police force said in a tweet.

Authorities advised people to protect themselves from the ash with face masks.

Two rivers of lava continued to slide slowly down the hillside, with experts doubting whether they would cover the remaining 1.25 miles) to the sea due to their slowing progress.

One of the molten rock flows has almost ground to a halt and a second one is moving at between 4 and 5 meters an hour, the Guardia Civil said.

Both are at least 33 feet high at their leading edge and are destroying houses, farmland and infrastructure in their path.

Scientists say the lava flows could last for weeks or months.