The end of the ‘poopocalypse’? iRobot’s new £900 Roomba vacuum cleaner is trained to avoid dog and cat faeces after pet owners complained about it spreading the mess around their home

These ‘poopocalypses’ were a disgusting problem that even the manufacturers admitted back in 2016 was ‘seen a lot’ and needed a solution.

The Roomba j7+ can also avoid getting tangled in cables, automatically clean only when everyone has left the house and learn from the feedback you give it.

And each robot is covered by POOP — the ‘Pet Owners’ Official Promise — with iRobot offering to replace any Roomba j7+ that doesn’t avoid solid pet waste.

The WiFi-enabled Roomba j7+, which comes with a ‘clean base’ automatic dirt disposal system is retailing in the UK, US, Canada and Europe now from £899.99. 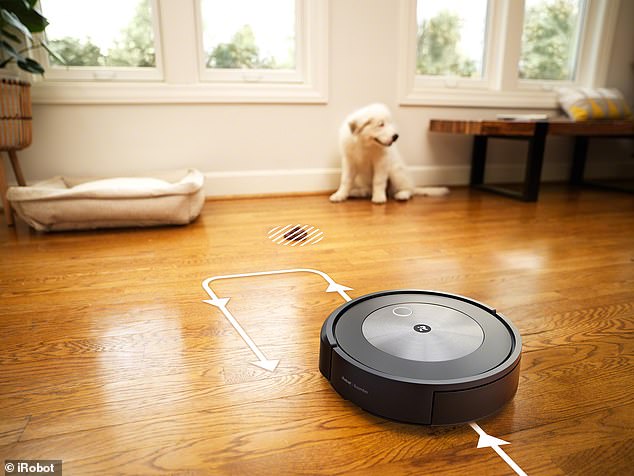 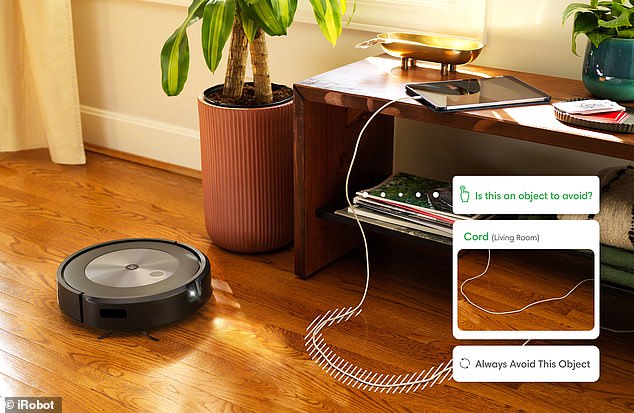 The Roomba j7+ can also avoid getting tangled in cables, automatically clean only when everyone has left the house and learn from the feedback you give it (as depicted) 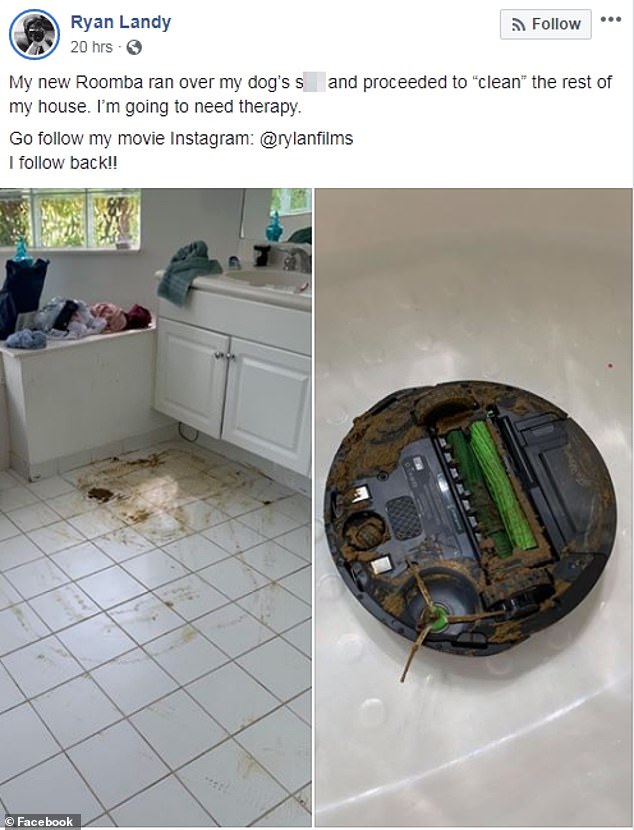 The Roomba j7+ comes with a series of Genius 3.0 home intelligence features:

Clean While I’m Away

Uses your smartphone’s location service to clean when you’re away.

Betters helps users set up smart maps of their homes so the Roomba can most efficiently navigate.

Uses smart mapping to tell how long a clean will take — so, for example, you can work out if you can squeeze one in before guests come over.

The Roomba can be programmed to shut down vacuuming while going to its cleaning jobs as so to not disturb.

‘We understand home environments and lifestyles are unique and that it’s important to offer intelligent, simple-to-use products that more thoughtfully work within the boundaries of house rules set by the user.

‘The Roomba j7+ with iRobot Genius provides greater levels of personalisation, new home automations and the ability to get smarter over time.’

This, he added, allows the robot ‘to deliver a more intuitive cleaning experience so people have more time to do what’s most important to them.’

Software on board the Roomba allows it to map out the floorplan of your home and learn the best ways to navigate it — as well as allowing users to instruct it to clean specific areas of the house.

Commands to the machine can be given either via onboard controls, the iRobot Home app or via a smart assistant like Alexa or Google Home.

The robot’s base station, meanwhile, is designed to occupy as little space as possible, can store dirt collected by the vacuum for up to 60 days before the bag needs replacing and also has a hidden compartment for storing spare bags.

‘People have more important things to do than worry about vacuuming, so we developed the Roomba j7+ to be thoughtful, responsive and put people’s needs first,’ said iRobot chief product officer Keith Hartsfield.

‘It’s a powerful, hands-free cleaning system that detects and avoids obstacles, adapts to the user’s needs, cleans based on individual preferences and schedules, and gets smarter over time.

‘It also brings with it a beautiful design that fits seamlessly into the home.

‘All of this gives the user assurance that the job will get done in a way that is tailored to their individual needs.’ 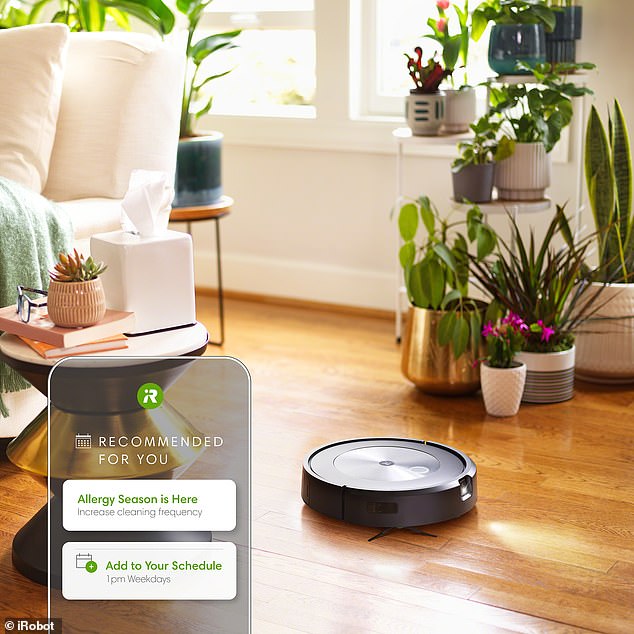 ‘People have more important things to do than worry about vacuuming, so we developed the Roomba j7+ to be thoughtful, responsive and put people’s needs first,’ said iRobot chief product officer Keith Hartsfield 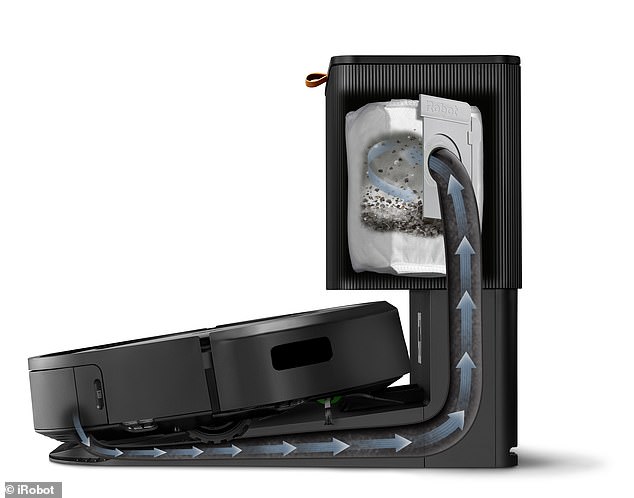 The robot’s base station, meanwhile, is designed to occupy as little space as possible, can store dirt collected by the vacuum for up to 60 days before the bag needs replacing (as depicted) and also has a hidden compartment for storing spare bags

Man, 23, reveals how his robotic vacuum ran over dog poop while cleaning and then smeared the mess all over his floor

A man trying to save time by cleaning his home got more than he bargained for when his robot smeared dog poo all over the floor.

The hands-free machine ended up running into faeces left behind from his dog — causing far more of a mess than Ryan had on his hands to begin with.

The 23-year-old aspiring film director took to Facebook to jokingly declare he would ‘need therapy’ after the gross incident. 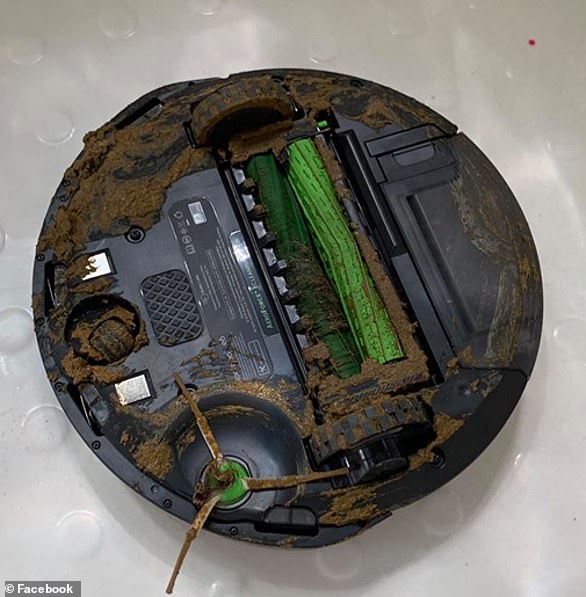 Mr Ladry’s Roomba robot, pictured, was more of a hindrance than a help when it came into contact with his pet’s poo

The Florida-native also shared the epic house cleaning fail to Reddit, where it became the most popular post of the day. Over 82,000 people have interacted with Landy’s post in the ‘Well, That Sucks’ forum.

Landy stated that the dog in question was a new rescue pup adopted by the family. The new addition to the household is also still being trained.

‘We had the Roomba in a room with the door closed, the dog opened the door and took a s**t, couldn’t have really predicted it lol,’ Landy told members.

Other people on the thread commented that they had had similar experiences.

‘Just happened to me a few months back, with half of my floor being carpeted,’ one user with the handle @204_no_content said.

‘You’ve got to completely disassemble the Roomba and deep clean it.

‘The wheels and brushes were the worst. Cleaning the carpet was child’s play compared to the Roomba restoration.’ 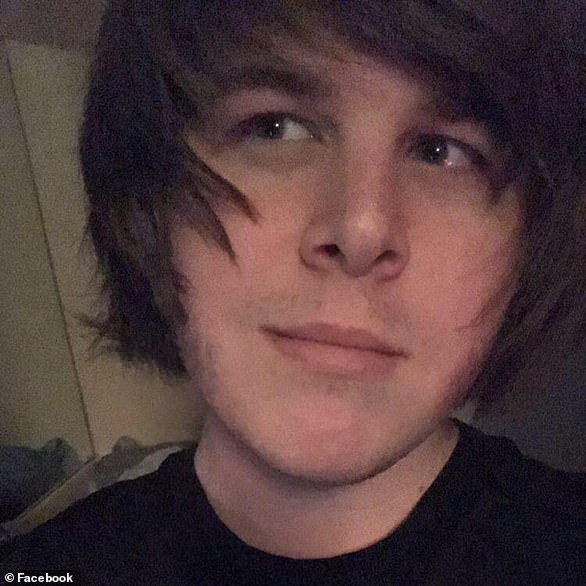 Ryan Landy, 23, was not pleased arriving home to the mess left by the Roomba

Another pet-owner said that their Roomba had, unfortunately, run into both cat poo and cat puke.

A 2016 article that ran in The Guardian detailed a ‘poopocalypse’, with many owners of Roombas recalling times where their pets’ poo had been smeared all over the house by the handy robot.

A representative from iRobot, which manufactures the device, told the outlet that disasters like this did used to happen with depressing frequency.

‘Quite honestly, we see this a lot,’ the spokesperson said.

‘We generally tell people to try not to schedule your vacuum if you know you have dogs that may create such a mess. With animals anything can happen.’