Instagram has added a new section on user profiles allowing people to specify their pronouns.

The Facebook-owned platform said the new field is available ‘in a few countries, with plans for more’ though it has already been spotted on some UK accounts.

People can pick up to four pronouns from a selection chosen by the social network, with options including he, she, they, per, nir and vis.

However, users are also able to request other pronouns that do not already appear as an option via a form on Instagram’s help page. 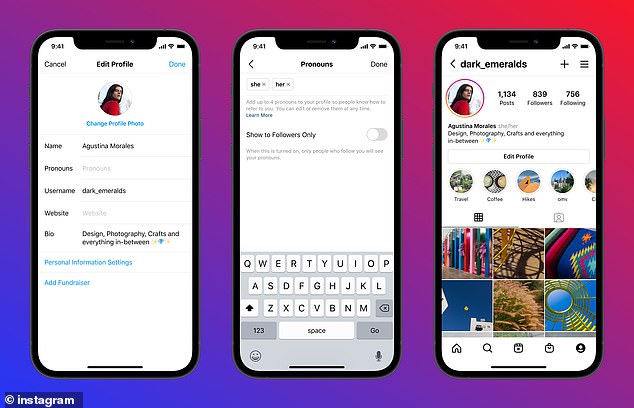 People can pick up to four pronouns, from a selection chosen by the social network, with options including he, she, they, per, nir and vis

1. Open the Instagram app and tap on your profile

4. Type in up to four pronouns that you’d like to appear on your profile

5. Tap the toggle if you’d like to only show your pronouns to followers

Vishal Shah, the platform’s vice president of product, added: ‘It’s another way to express yourself on Instagram and we’ve seen a lot of people adding pronouns already, so hopefully this makes it even easier.’

The update has been welcomed by many users who have been manually adding their pronouns in their bio until now.

Taking to Twitter, one user wrote: ‘Instagram added a pronouns section sheeeeesh they finally did something cool wtf.’

Another added: ‘instagram lets u add pronouns right onto ur profile now!!!!!! might be a “small thing” but still cool i think.’

Users can edit their gender selection by tapping the ‘Edit Profile’ button on their account, then selecting ‘Gender.’

After selecting Custom, they can type in a custom identity, such as ‘Gender Non-conforming,’ ‘Non-binary,’ ‘Queer’ or whatever term they identify with.

The move follows in the footsteps of other apps, like Tinder, Grinder and OK Cupid, which have rolled out gender inclusive features, such as letting users choose their preferred pronoun.

Instagram has launched a crackdown on fake accounts, introducing a new feature showing users information about who is really behind a username.

The Photo-sharing app’ more than 1 billion users will now be able to evaluate the authenticity of accounts, weeks after parent Facebook rolled out similar measures in a bid to weed out fake accounts on its social media platform.

The ‘About This Account’ feature will allow users to see the advertisements an account is running, the country where the account is located, username changes in the past year as well as other details.

To learn more about an account, go to their Profile, tap the … menu and then select ‘About This Account.’

There, you will see the date the account joined Instagram, the country where the account is located, accounts with shared followers, any username changes in the last year and any ads the account is currently running.

Along with the account username, applicants will need to provide full real names and a copy of legal or business identification.

Instagram also said it will allow the use of third-party apps such as DUO Mobile and Google Authenticator for two-factor authentication to help users securely log in to their accounts.