Time for a deep clean? The inside of your car has more germs than the average TOILET SEAT – with the boot, driver’s seat and gearstick harbouring the most bacteria, study reveals

From muddy boots, sweet wrappers and used wet wipes, dumping your rubbish in your car may seem like a harmless thing to do.

But scientists reveal today that the inside of your car is dirtier than the average toilet, and is home to a thriving community of harmful bacteria.

Overall, the car boot had the most bacteria, followed by the driver’s seat, the gearstick and the back seat.

But all six points swabbed within the cars were shown to harbour more bacteria than dirty toilet seats, they found.

In particular, the study found that the car boot hosts to significantly high levels of bacteria, including E.coli – commonly known as faecal bacteria.

The findings ‘pose a clear concern’ for anyone that puts their fruit and veg in the boot after a trip to the shops or enjoys a drive-through meal in their car. 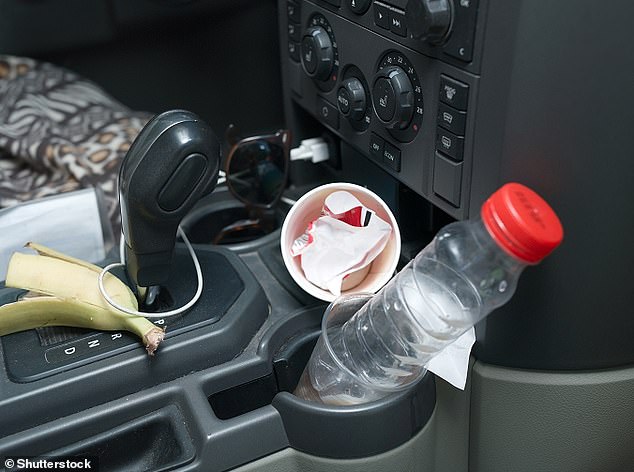 Aston University researchers took samples from car interiors with varied ownership histories, to establish bacterial contamination levels within the vehicles and to highlight how thoroughly people clean their cars 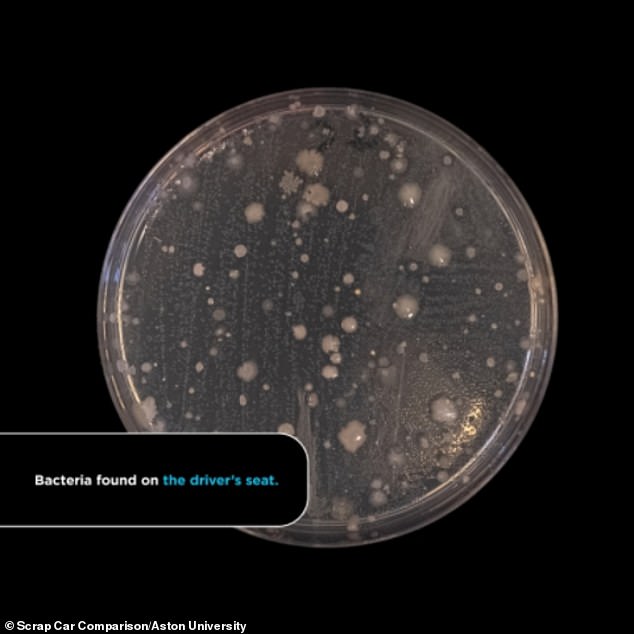 Pictured, bacteria found on the driver’s seat. A total of just 34 bacteria were identified on the toilets sampled – so significantly lower than within the cars

FILTHIEST PARTS OF YOUR CAR

In all, 1,425 bacteria was identified during the research.

The results suggest motorists should be cleaning the interior of their cars more frequently, as well as the outside.

‘The results of this study are fascinating, as they help to show that despite cleaning our cars, the older they are, the dirtier they generally are,’ said Dr Jonathan Cox, a senior lecturer in microbiology at Aston University.

‘This becomes key when thinking about areas such as the car boot or driver’s seat. Many of us have placed loose food shopping in our boots, or dropped the odd crisp onto our seat, before picking it up and eating it.’

Scrap Car Comparison partnered with Aston University to conduct the study which took place in December 2021.

The cars included a 17-year-old Peugeot 307-SW, a nine-year-old Honda Jazz and a 13-year-old Ford Focus. Some cars were bought second hand and had hosted children and animals.

Each swab was spread onto a nutrient agar (NA) and a violet red bile glucose (VRBG) culture medium. NA supports all bacterial growth, whereas VRBG only supports the growth of Enterobacteriaceae, found in the faeces of humans and animals. 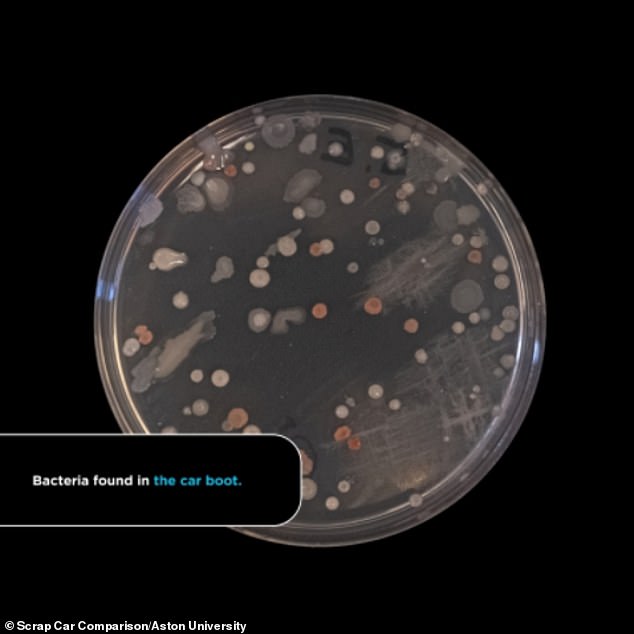 The worst part of the car in terms of risky bacteria was the boot, the Aston University researchers found. Pictured, bacteria in the car boot 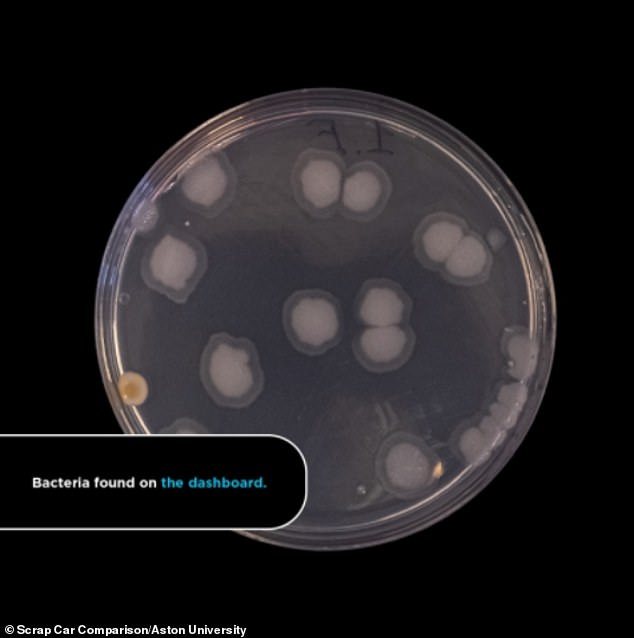 Inoculated agar plates were incubated at 98.6°F (37°C) for 24 hours to enable bacterial growth. All colonies were subject to the Gram staining method to enable identification.

Two domestic toilets were were also swabbed that had not been knowingly cleaned but had been used in the preceding 24 hours.

All six car swab points – the boot, driver’s seat, gearstick, back seat, dashboard and steering wheel – had more bacteria than the toilet seats, the team found.

A total of 34 bacteria were identified on the toilets sampled – so significantly lower than within the cars.

Bacteria found included Pseudomonas, a bacterium with strains that can’t easily be treated with antibiotics and Staph Aureus, a germ associated with coughs and sneezes that in some cases is linked to MRSA.

There was also a correlation discovered between the age of a car, and the levels of bacteria likely to be found within it.

The older cars sampled for the study exhibited higher bacteria loads than those that have been on the road for a shorter amount of time.

Interestingly, out of all areas of our cars, the steering wheel was generally found to be the cleanest.

This high-contact area saw very low levels of bacterial contamination and could be due to the uplift in hand sanitiser use following the Covid pandemic.

‘These results highlight that we should change how we think about our cars and cleanliness,’ Dr Cox said.

‘Often, we will clean our cars based on whether they ‘look’ clean versus whether they actually are clean. But you would never even think about eating off your toilet seat.’

BACTERIA FOUND IN THE CAR INTERIORS

– E. coli (Escherichia coli) – A faecal coliform (aka. enterobacteriaceae) – bacteria from the gut. Most strains from the gut are harmless and we are not able to identify the specific strains. Transmission of pathogenic strains is normally faecal-oral transmission e.g. dropping some food on the heavily contaminated driver’s seat and eating it. This could cause food poisoning in some cases.

– Pseudomonas (Pseudomonas aeruginosa) – This is a ubiquitous organism (it is found in lots of places in the environment; soil, water, skin etc.) but is a bacterial species of increasing concern due to its infectivity to humans and animals, and some strains can’t be easily treated with antibiotics.

– Bacillus (Bacillus subtilis) – Can be found in the gastrointestinal tract of humans and ruminating animals. It doesn’t normally come from the environment and thankfully, doesn’t pose a threat to humans.

– Staph. Epi (Staphylococcus epidermidis) – Skin microbes found on everyone’s hands. They can cause infections in people who are immunocompromised.