Coronaviruses capable of infecting humans may have been circulating undetected in bats for decades.

Research suggests one of the closest known ancestors of the virus that causes Covid-19 emerged in bats more than 40 years ago.

It has been poised for human crossover for some time, the scientists said.

And this casts further doubt on conspiracy theories that the virus causing Covid-19 was bioengineered or escaped from a laboratory, they added.

Prof David Robertson, of the University of Glasgow, worked on the study, published in the journal Nature Microbiology.

He said that while Sars-CoV-2 (the pandemic coronavirus) is genetically very close to the nearest known bat viruses, they are separated in time by several decades.

“That suggests that these viruses with potential to emerge in humans have been around for some time,” he told BBC News.

“We really do need to understand where or how the virus has crossed into the human population. If we now believe there’s this generalist virus circulating in bats we need to get better at monitoring that.”

The work points to the need for further surveillance of emerging diseases in humans and to carry out more sampling within wild bat populations, if we are to prevent future pandemics, he said.

“If these viruses have been around for decades that means that they’ve had lots of opportunity to find new host species, including humans,” said Prof Robertson.

The researchers compared the genetic make-up of Sars-CoV-2 with that of a close relative in bats, a virus known as RaTG13, and other related bat viruses.

They dated the time the two shared a common ancestor, and found they went along their own evolutionary pathways several decades ago.

Prof Mark Pagel of the University of Reading, who was not part of the study, said the work suggests that coronaviruses capable of infecting humans have been present in bats for perhaps 40 to 70 years but have gone undetected.

“This is significant in pointing to the scale and nature of the problems that zoonotic transmission presents to humans – there may be numerous and as yet undetected viruses capable of infecting humans that reside in animal hosts.” 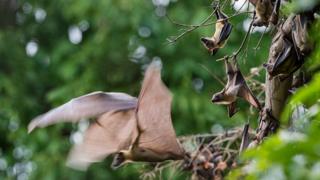 The viruses may have gone on to infect other wildlife, particularly those coming into close contact with each other through illegal wildlife trade. But to date, all the evidence points to bats being the important reservoir.

Previous research has suggested that pangolins might have played a role in the evolution of Sars-CoV-2, but the latest study suggests this is not the case.

Instead, pangolins may have picked up the virus more recently through contact with other wild animals through wildlife trafficking into China.