Astonishing footage has revealed the moment a savage grouper fish devoured an entire shark in one bite.

The video was taken by researchers trying to find shipwrecks on the sea floor and they rarely capture such carnivorous events.

Eleven sharks – consisting of two dogfish species – were picking clean the carcass of a large swordfish weighing around 250lbs (113kg) when the grouper arrived.

It proceeded to engulf one of the small sharks and the entire ruckus was observed by researchers from the NOAA and captured on camera. 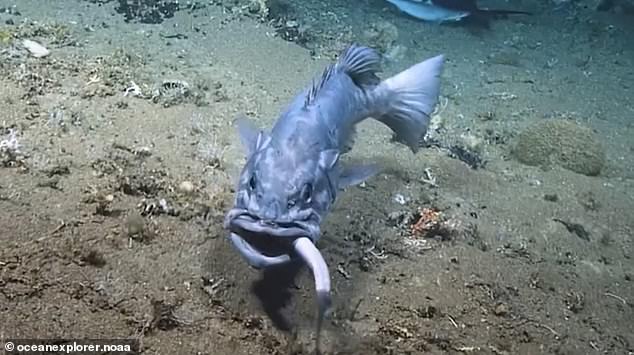 A savage grouper fish has been caught on camera devouring a shark on the sea floor by researchers trying to find shipwrecks. It ate the animal whole and swam around with the tail hanging out its mouth (pictured)

WHAT IS A GROUPER?

It is a type of bony fish which are very large and belong to the sea bass family.

They have a big head and wide mouth and are found in warm seas.

They often occupy the depths and the sea floor and feed on a range of things, including other fish and even sharks.

Some species of groupers grow about a kilogram per year and males often occupy harems of females, sometimes up to 15 at a time.

The US National Oceanic and Atmospheric Administration (NOAA) posted the video and an account of the shocking events on its blog, which read: ‘The swordfish was clearly recently deceased, perhaps only by a few hours, given the condition of its body and the rapid disappearance of its flesh into the stomachs of the sharks.

‘The cause of the death of this majestic animal is unclear, perhaps owing to age, disease, or some other injury.

‘There was no visible hook or trail of fishing line suggesting this was a lost catch.

‘However, any type of injury would have been masked by the massive damage caused by hundreds of shark bites.’

Groupers are large bony fish whereas sharks are described as cartilaginous and are both deep-sea species living at depths of around 700-2,000 feet (213-610 meters).

The onlooking scientists claim the hungry fish used their exploratory rover for cover in order to snare its meal.

They write: ‘It demonstrated the ability of large predatory fishes to feed on smaller sharks.

Normally the research team sees little signs of sharks but the presence of the 250lb swordfish brought out a host of animals looking to scavenge its remains. 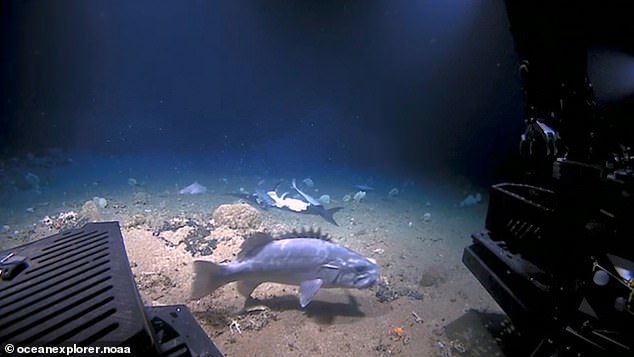 Groupers are large bony fish whereas sharks are described as cartilaginous and are both deep-sea species living at depths of around 700-2,000 feet (213-610 meters). The onlooking scientists claim the hungry fish used their exploratory rover for cover when hunting