Could ‘immortal jellyfish’ hold the clue to immortality? Scientists discover sea creature has double copies of all its genes that prevents it from ever ageing – and believe the quirk could inspire new medical treatments to keep people alive forever

An ‘immortal’ jellyfish could hold clues on how to improve human lifespan, as it is the only species of its kind capable of reverting to its juvenile state and growing back to an adult throughout its entire life.

A team of researchers, led by the University of Oviedo in Spain, mapped the genetic code of the Turritopsis dohrnii (T. dohrnii) and found that, unlike other species of jellyfish that lose their ‘immortality’ at sexual maturity, this one holds on to it because it has twice the number of genomes associated with copying and repairing DNA.

The jellyfish activates this ‘superpower’ to avoid predators, allowing it to revert to a cyst, then forms as a polyp attached to the seafloor and when the threat is gone, the creature starts back on the road to maturity.

Scientists, however, are not looking to harvest the marine animal and turn it into a skin cream, but aim ‘to better understand the keys and limits of the fascinating cellular plasticity that allows some organisms to be able to travel back in the time’. 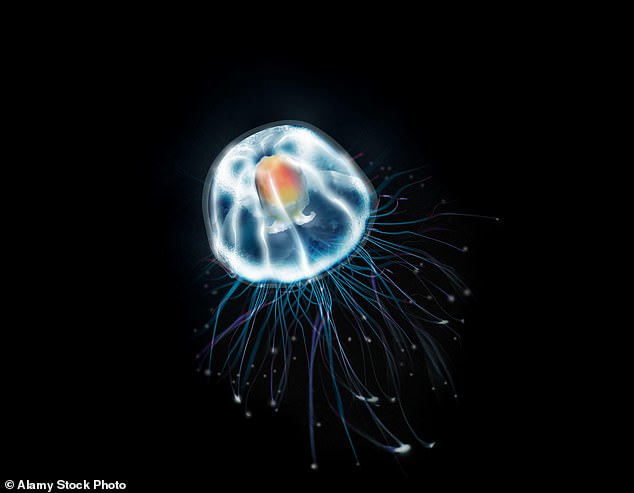 Scientists have only been aware of the immortal jellyfish (pictured is a Turritopsis dohrnii) for at least 15 years. They are hoping to unravel how it can cheat death in order to do the same for humans

T. dohrnii’s ability has only been known to scientists for at least 15 years and is a prime candidate to better understand the human aging process.

Like other types of jellyfish, the T. dohrnii goes through a two-part life cycle, living on the sea floor during an asexual phase, where its chief role is to stay alive during times of food scarcity. When conditions are right, jellyfish reproduce sexually.

Although many types of jellyfish have some capacity to reverse aging and revert to a larval stage, most lose this ability once they reach sexual maturity, the authors wrote in the study published in the Proceedings of the National Academy of Sciences.

The study also notes that this is not the case for T. dohrnii, as it is ‘the only one that maintains its high rejuvenation potential (up to 100 percent) in postreproductive stages, reaching biological immortality.’ 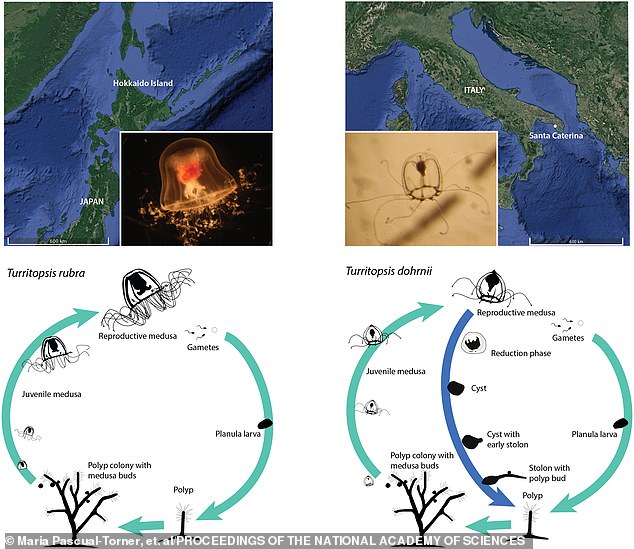 The study compared the immortal jellyfish (right) with one of its mortal relatives (left) to pinpoint genes that allow it to rejuvenate. The results showed the Turritopsis dohrnii has twice as many genomes associated with copying and repairing DNA

Researchers began their work by first sequencing the immortal jellyfish’s genome and compared the results to the Turritopsis rubra. Both of which are related, but the latter does not possess the same rejuvenating ability.

Nearly 1,000 genes from both specimens involving aging and DNA repair were analyzed and compared.

The data shows the immortal jellyfish has twice as many copies of genes associated with DNA repair and protection, which allows it to cheat death, New Scientist reports.

These duplicates could produce greater amounts of protective and restorative proteins.

And T. dohrnii are able to better maintain the ends of chromosomes called telomeres. In humans and other species, telomere length becomes shorter with age.

Monty Graham, a jellyfish expert and director of the Florida Institute of Oceanography, who was not involved in the research, said in a statement: ‘We can’t look at it as, hey, we are going to harvest these jellyfish and turn it into a skin cream.

It has more to do with understanding the processes and protein functionality that helps these jellyfish cheat death.