Hyundai unveils a four-wheeled robot that’s designed to carry almost ANYTHING – including parcels, babies and trays of drinks

A new four-wheeled robot designed to carry anything from parcels and drinks to babies and health monitors, has been developed by Hyundai.

The Mobile Eccentric Droid (MobED) robot has a low and flat body that is perfect for ‘stability and high manoeuvrability’ tasks, according to Hyundai.

It will be officially unveiled at the Consumer Electronics Show (CES) 2022 in January, where it will be shown undertaking tasks in complex and challenging environments.

In a promotional video for the device, it can be seen carrying a baby and crossing a hill while loaded with a pyramid of glasses filled with champagne.

MobED is 26 inches long, weighs 110lb and would be a useful ‘mobility device for hte elderly or disabled,’ Hyundai explained.

No pricing details have been released for the device, and Hyundai is yet to say when it will be commercially available. 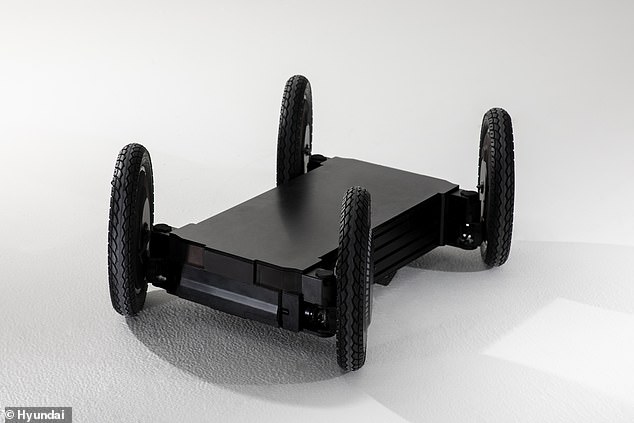 The Mobile Eccentric Droid (MobED) has been developed with a low and flat body that is perfect for ‘stability and high manoeuvrability’ tasks, said South Korea-based Hyundai

Wheelbase: Its wheelbase expands to 25 inches (65 cm) for optimum stability in high-speed driving.

This then scales down to 17 inches (45 cm) for low-speed manoeuvres in more complex environments.

It has been designed with a flat, rectangular body to allow for multiple uses, and rides on four large wheels with an independent suspension.

It means the platform can move through even the most complicated urban environments by adjusting the wheelbase and steering angles more freely.

‘We have developed the MobED platform to overcome the limitations of existing indoor guide and service robots while maximizing its usability in cities,’ said Dong Jin Hyun, Head of Hyundai Motor Group Robotics Lab.

‘We are also looking ahead to assess how potential users of MobED will further expand their needs and use for this type of technology.’

It comes with a number of new technologies, including ‘Eccentric Wheel’ drive and high-tech steering, breaking and altitude control systems.

This allows it to adapt and realise the optimum posture on different road surface and environments, without requiring human input or new wheels.

There are three motors mounted to each wheel, providing power and precise steering to the wheels, while providing greater posture control for the body.

Individual power and steering control for each wheel enabled ‘in-place rotation and omnidirectional movement,’ the firm explained in a press release.

This allows for highly effective mobility even in narrow situations, they added.

The ‘Eccentric’ wheel drive controls the posture and stabilised the body attitude by adjusting the height of each wheel according to the ground environment.

The MobED’s 12-inch pneumatic tires further help to absorb bumps and vibrations, allowing it to carry even the most delicate payloads. 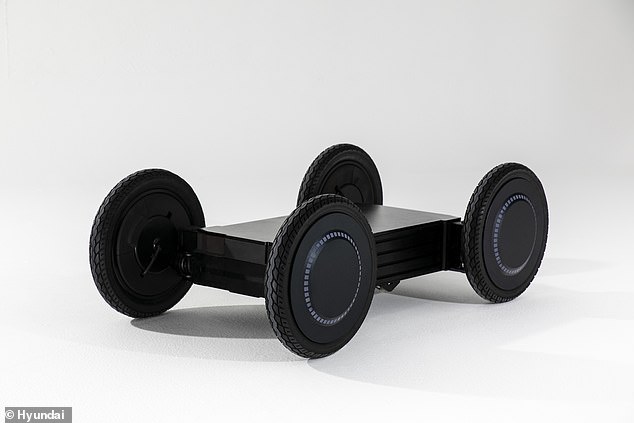 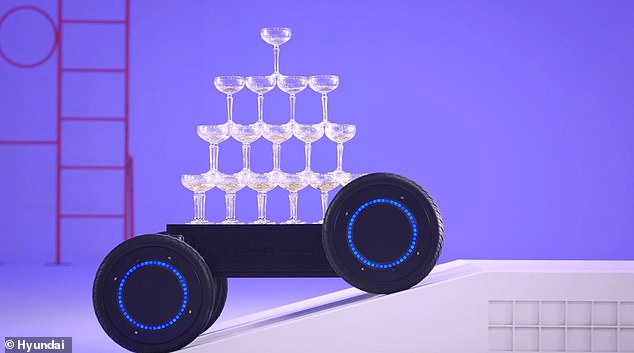 In a promotional video for the device, it can be seen carrying a baby, and crossing a hill while loaded with a pyramid of glasses filled with champagne

Hyundai says its device has been designed for full versatility and modularity, allowing it to be utilised for multiple applications.

The wheelbase expands to 25 inches long when moving at speed, and shrinks to 17 inches when traversing more complex terrain.

This provides even more flexibility, allowing it to be used at speed in consistent, flat environments, or more slowly over unexpected terrain – regardless of payload. 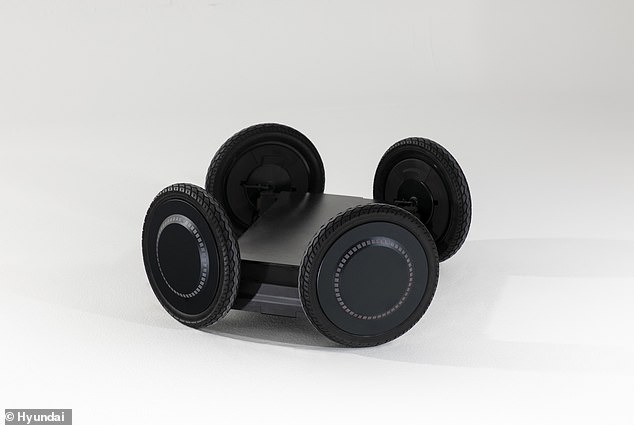 It has been designed with a flat, rectangular body to allow for multiple uses, and rides on four large wheels with an independent suspension

‘Thanks to its outstanding manoeuvrability, the platform can also be used for service robots that can operate both indoors and outdoors,’ it said in a press release.

In the future its expects MobED could also be used as a mobility device for the elderly or the disabled, but would need to be increased in size first.

Right now they believe it could also be used as a stroller or leisure vehicle.

Hyundai aren’t alone in going after the personal mobility market, with both Toyota and Honda investing in devices in this sector.

Boston Dynamics first showed off Spot, the most advanced robot dog ever created, in a video posted in November 2017.

The firm, best known for Atlas, its 5 foot 9 (1.7 metre) humanoid robot, has revealed a new ‘lightweight’ version of its robot Spot.

The robotic canine was shown trotting around a yard, with the promise that more information from the notoriously secretive firm is ‘coming soon’.

‘Spot is a small four-legged robot that comfortably fits in an office or home’ the firm says on its website.

Spot is all-electric and can go for about 90 minutes on a charge, depending on what it is doing, the firm says, boasting ‘Spot is the quietest robot we have built.’

Spot was first unveiled in 2016, and a previous version of the mini version of spot with a strange extendable neck has been shown off helping around the house.

In the firm’s previous video, the robot is shown walking out of the firm’s HQ and into what appears to be a home.

There, it helps load a dishwasher and carries a can to the trash.

It also at one point encounters a dropped banana skin and falls dramatically – but uses its extendable neck to push itself back up.

‘Spot is one of the quietest robots we have ever built, the firm says, due to its electric motors.

‘It has a variety of sensors, including depth cameras, a solid state gyro (IMU) and proprioception sensors in the limbs.

‘Spot performs some tasks autonomously, but often uses a human for high-level guidance.’