Hurricane Iota has gained even more strength in the Atlantic Ocean, as it prepares to make landfall. It has now reach wind speeds of up to 160mph (260km/h), meaning Iota is now officially a category five hurricane. Which countries are most likely to be impacted by Iota?

Iota is the strongest hurricane of the record-breaking 2020 hurricane season.

It is also one of the most rapidly-intensifying hurricanes ever recorded in the Atlantic Ocean, experts have warned.

The National Hurricane Center (NHC) confirmed on Monday (November 16) that Iota had transformed into a mega category five storm. 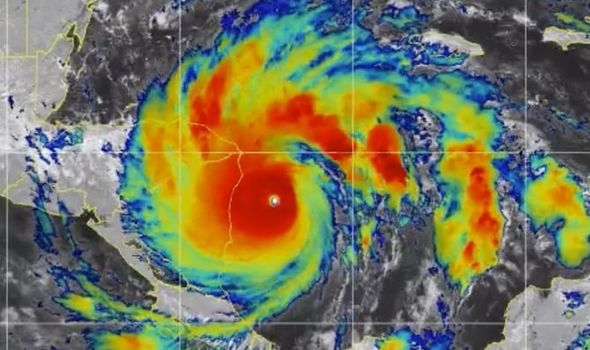 The storm has grown so large that hurricane-force winds may be felt some 35 miles away from the eye of the storm.

Earlier this month, the NHC confirmed that 2020 was the busiest hurricane season on record.

Twenty-nine tropical or subtropical storms have been recorded by meteorologists.

The 2020 hurricane season surpassed the 2005 storm season, which included the infamous Hurricane Katrina.

Where will Hurricane Iota make landfall?

Iota is heading directly for Central America, and is expected to make landfall within a matter of hours.

A hurricane warning has been put in effect for the coast of Nicaragua, northeastern Honduras, and Providencia, Colombia.

These areas have been told to expect hurricane conditions.

They should also make preparations to protect life and property. 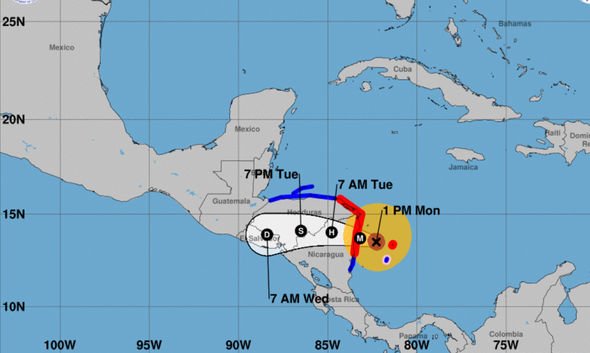 “Category 5 Hurricane #Iota is getting closer to Nicaragua,” tweeted the NHC.

“Hurricane-force winds should begin in a few hours, with landfall expected this evening.

“This is a life-threatening situation and please heed the advice of local officials.”

Iota is expected to remain a category five hurricane when it makes landfall, off the coast of Nicaragua.

The storm has been forecasted to move directly west across Central America.

By the time the eye of the storm reaches El Salvador, on the west coast, it is expected to be significantly weaker.

The forecasts show that it may take up to 48 hours for the hurricane to move across Nicaragua, Honduras, and into El Salvador.