A whale of a journey: Humpback named Moon travels 3,000 miles from Canada to Hawaii with a broken spine -but experts say she will likely die off the coast of Maui due to the injury

A humpback whale with a broken spine defied all odds when it completed a 3,000-mile journey from Canada to Hawaii doing the breaststroke.

Nicknamed Moon, the whale was spotted off the coast of British Colombia with a crooked lower body that researchers believe was caused by a boat striking the animal.

The injury did not stop Moon from completing her annual migration to warmer waters, but images of the whale off the coast of Maui show the tiresome journey left it emaciated and covered in whale lice.

While researchers with the Pacific Whale Foundation, which has been tracking Moon for a decade, are relieved she made it to Hawaii, they note this is where she will likely die.

The humpback whale, nicknamed Moon, was spotted in British Columbia in September. Drones captured images of the whale, showing it had a broken spine

Moon was first spotted on September 7 by the Fin Island Research Station, which noticed its lower body was bent in an unnatural ‘S’ shape that was expected from the dorsal fin to her fluke.

The team unleashed a drone for a closer look, revealing the severe spinal injury.

‘The harrowing images of her twisted body stirred us all,’ BC Whales shared in a social media post.

‘She was likely in considerable pain yet she migrated thousands of miles without being able to propel herself with her tail.’

While the size of Moon is unknown, female humpback whales can grow up to 49 feet long and weigh around 35 tons.

The injury, likely caused by a boat strike, did not stop the whale from making its annual migration to Hawaii

The whale has taken the same path every year for the past decade, researchers said, which is likely an inherited behavior.

When Moon appeared in Canadian waters in 2020, researchers were elated to see her with a calf

But in September, researchers noticed something different.

‘This is the stark reality of a vessel strike, and it speaks to the extended suffering that whales can endure afterwards,’ BC Whales wrote.

‘It also speaks to their instinct and culture: the lengths whales will go to follow patterns of behavior.’

While Moon completed her yearly migration, researchers noted that this would be the last time she makes the epic journey.

‘Tenacity and tragedy. Moon.. will not make it back,’ reads the BC Whales’ post.

‘We will never truly understand the strength it took for Moon to take on what is regrettably her last journey, but it is on us to respect such tenacity within another species and recognize that vessel strikes lead to a devastating end.’

Janie Wray, the CEO and lead researcher for BC Whales, told The Guardian that scientists would rather euthanize the whale to end her suffering but fear the ‘a cocktail of toxic substances’ could poison marine life that would feast on her remains. 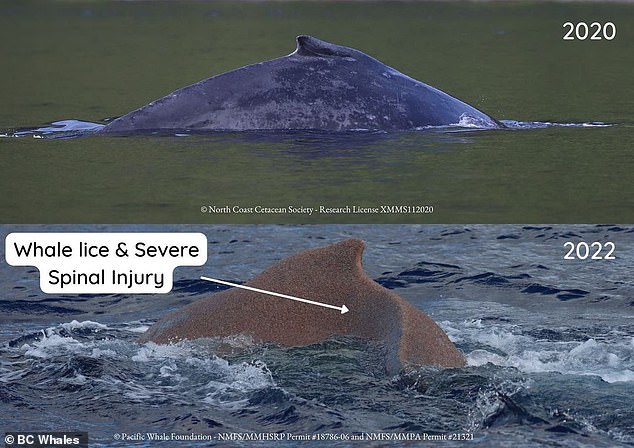 The tiresome journey left it emaciated and covered in whale lice. Researchers said the whale will likely die soon

‘If she was on land, we could intervene,’ Wray told the outlet.

‘But because she’s in the ocean, and because of her size, there is nothing that we can do. And that just breaks your heart even further into pieces.’

Every year, up to 20,000 whales die from lethal collisions with vessels.

But another killer is lurking in the oceans – plastics.

Last month, the massive body of a sperm whale washed ashore in Nova Scotia that had ingested 330 pounds of trash, which led to its death.

The 45-foot-long male looked emaciated when it came ashore on November 4, and although teams worked to save the whale, it died the next day.

The Canadian Wildlife Health Cooperative conducted an autopsy shortly after and found fishing nets, ropes, gloves and various items made of plastic. 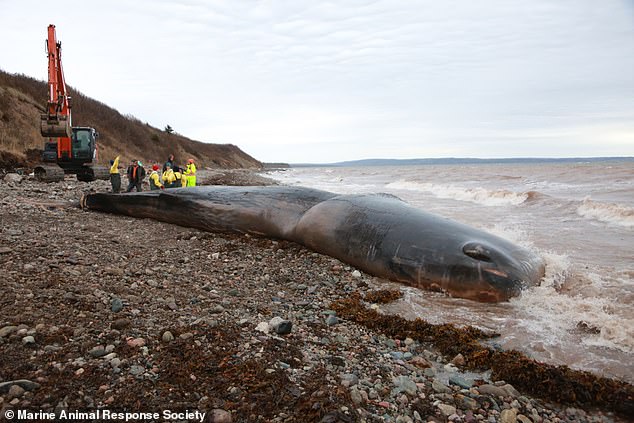 Last month, the massive body of a sperm whale washed ashore in Nova Scotia that had ingested 330 pounds of trash, which led to its death

The Marine Animal Response Society (MARS) recently shared the incident, which said the whale’s death is a ‘stark reminder’ about how serious the issue is of human trash littering Earth’s oceans.

Also, ‘gunshot’ call from humpback whales is recorded by scientists for the first time

And some humpback whales travel up to 3,700 MILES to find a mate, a study reveals