Hummingbirds can identify at least EIGHT colours that are invisible to humans because their eyes are able to detect ultraviolet light, study reveals

Hummingbirds can spot at least eight colours that are invisible to humans, a study has found.

Humans have three types of light-sensitive cone in their eyes, enabling them to see red, green and blue. But birds have a fourth – ultraviolet – revealing colours we can’t even imagine.

To test how the birds perceive this vivid world, scientists set up two feeders in the Rocky mountains, Colorado, next to LED lights that displayed either visible or ultraviolet colours that appeared to be identical.

One feeder was filled with sugary water and the second with plain water.

Over several hours, hummingbird visitors quickly learned which contained the meal, revealing they could distinguish colours invisible to the human eye. 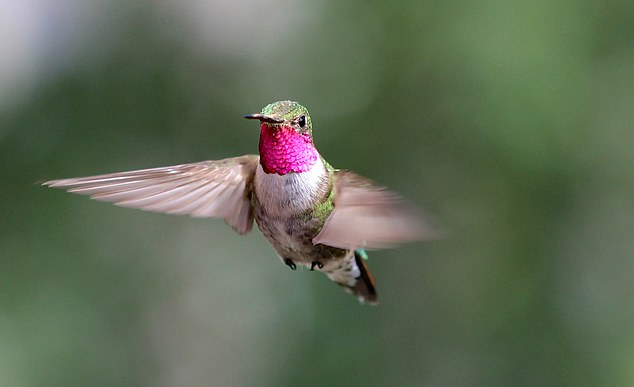 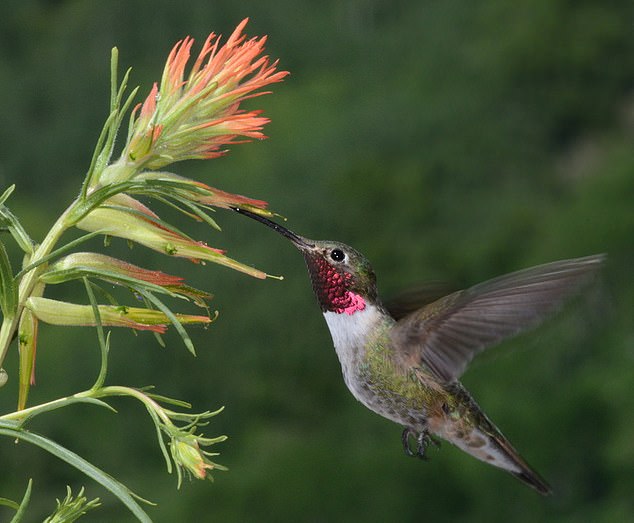 Humans lack this fourth cone – leaving them only able to see red, green and blue light

‘It was amazing to watch,’ said Harold Eyster, study co-author and PhD student at the University of British Columbia.

Co-author David Inouye, from the University of Maryland, added: ‘The colours that we see in the fields of wildflowers at our study site, the wildflower capital of Colorado, are stunning to us.

‘But just imagine what those flowers look like to birds with that extra sensory dimension.’

The scientists found the birds could identify at least eight different colours humans couldn’t see, and were able to distinguish between different intensities of ultraviolet light.

This means that theoretically they are able to see many many more colours than humans.

We can already see many different intensities of colours, as shown by paint charts used when we consider re-decorating a bathroom or bedroom. But these are likely to become infinitely more complex when an additional layer is added. 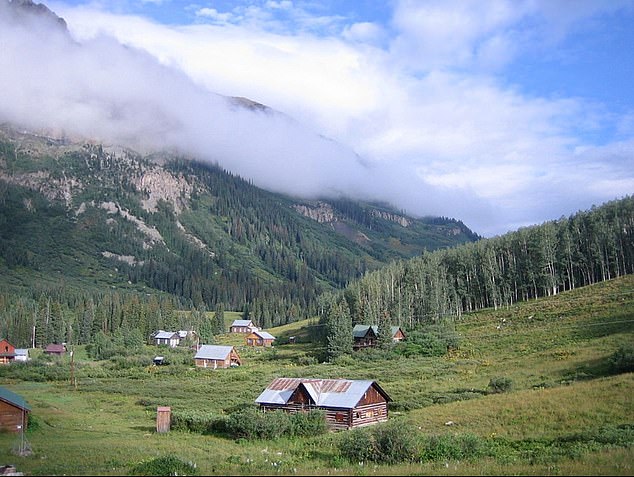 The experiments took place at the Rocky Mountain Biological Laboratory in Colorado. The scientists wanted to do the experiment in the wild in order to get a ‘bigger picture’ 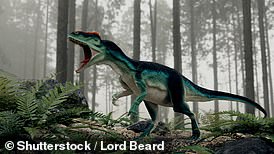 Artists impression of an Allosaurus

As ancestors of birds, it seems likely that dinosaurs were also able to see ultraviolet light – and more colours than humans.

A study published in Science from the University of Bonn, Germany, said that the close genetic relationship between the two meant dinosaurs would also have had a fourth cone for detecting the light.

And a second study published this year by scientists at the University of Nottingham, found dinosaurs may have glowed in the dark under ultraviolet light – further suggesting it was visible to them.

‘Plus we have good reason for thinking that they had excellent colour vision. Any ideas about photo-luminescence would mean that they were even showier, even gaudier than we’d thought.’

The scientists went to the Rocky Mountain Biological Laboratory every summer for three years to perform the experiment.

They chose this wild habitat as it would provide a ‘bigger picture’ than a lab-based experiment, and it was a site where the broad-tailed hummingbird (Selasphorus platycerus) breeds.

Hummingbirds were chosen as they have evolved to respond to the unique cues from flowers in order to find their main source of food – nectar.

During the experiments, scientists rose before dawn every morning to set up the feeders before watching the birds – recording more than 6,000 visits in a series of 19 experiments.

To ensure their results were accurate, the scientists also periodically swapped the positions of the rewarding and unrewarding tubes, so the birds couldn’t rely on location.

They also performed a control experiment to ensure hummingbirds weren’t using smell or a separate cue.

But each time, the birds learnt to visit the rewarding colour.

To further test their results, the researchers analysed a set of 3,315 feathers and plant colours. They found that birds saw many of these colours as nonspectral, while humans do not.

However, the team cautioned the wide variety is not unique to hummingbirds – and is certainly present in fish, reptiles, other birds – and was possibly used by dinosaurs.

‘This colour vision system is the norm for birds, many fish and reptiles, and it almost certainly existed in dinosaurs.

‘We think the ability to perceive many nonspectral colours is not just a feat of hummingbirds but a widespread feature of animal colour vision.’

The study also included scientists from Harvard University. It was published in the journal National Academy of Sciences.