Humans develop fine motor skills later than other primates because we have bigger brains that take longer to develop, biologists in Switzerland reveal.

Although ‘a big brain equals great dexterity’, humans have to wait relatively longer to develop full dexterity, allowing us to tie shoelaces, hold a pen or use cutlery.

Researchers at the University of Zurich studied more than 30 different primate species across seven years.

While species of great apes – including homo sapiens – have big brains and can therefore learn very skilful dexterity, they take longer to fully develop, they found.

In comparison, squirrel-like tamarins achieve their full potential when it comes to mastering objects quicker, but don’t have the skills of more sophisticated primates.

Despite humans taking longer to reach the peak of our skill potential, biologists claim to have found a common pattern across the different primate species.

They say the complex motor skills for manipulating food and tools develop in distinct stages that are apparent across nearly all primate species. 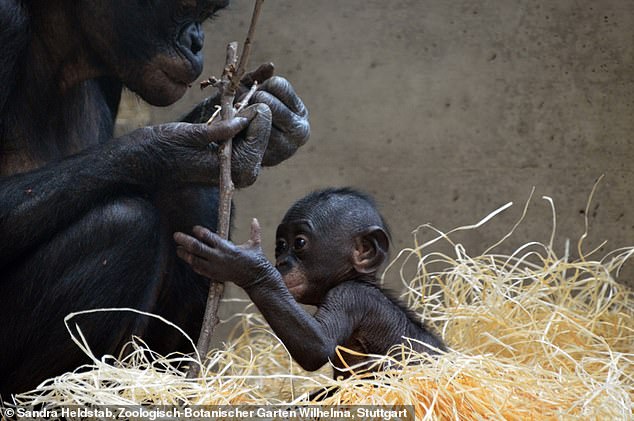 ‘It is no coincidence that we humans are so good at using our hands and using tools, our large brains made it possible,’ said Dr Sandra Heldstab, an evolutionary biologist in the Department of Anthropology at the University of Zurich, Switzerland.

‘Our results show that the neural development follows extremely rigid patterns – even in primate species that differ greatly in other respects.’

Human beings are very skilled with their hands, but take a long time to master the various dexterous abilities that we are capable of, when compared to other primates. 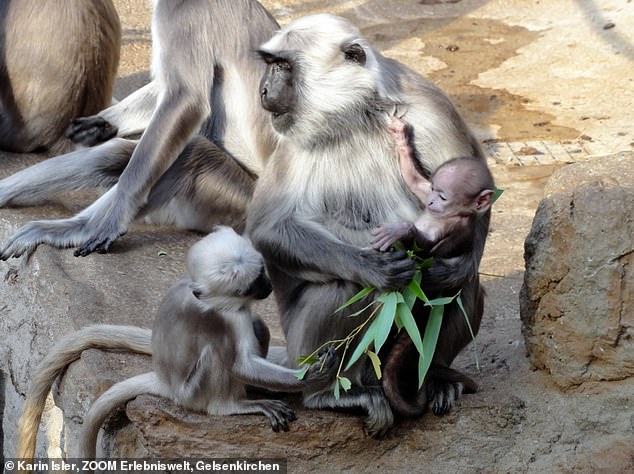 It takes human babies generally around five months before they can purposely grip an object, while learning more complicated skills, such as eating with fork and knife or tying shoelaces, can take another five to six years.

By that age, many other primate species are at the peak of their development and have even produced offspring of their own.

Researchers therefore wanted to address why humans take so much longer than some our closest relatives to learn fine motor skills.

Dr Heldstab and colleagues observed 36 different primate species over a period of more than seven years.

She studied 128 young animals in 13 European zoos from birth until the age at which they had reached adult-level dexterity.

All the species, including bonobos, squirrel monkeys and the peculiar-looking mantled guereza learned their respective manual skills in exactly the same order.

Like these mantled guerezas, all primate species learn their respective manual skills in exactly the same order

The researchers assessed the development of manipulative skills from the first week of life until individuals achieved adult-level finesse.

They determined the age at which individuals from each species first successfully performed skills from categories defined by forelimb use, hand use (both hands together and separately), finger use and the manipulation of multiple objects.

All but two of the species – the Javan gibbon and the pileated gibbon – clearly mastered each type of skill in the same sequence. 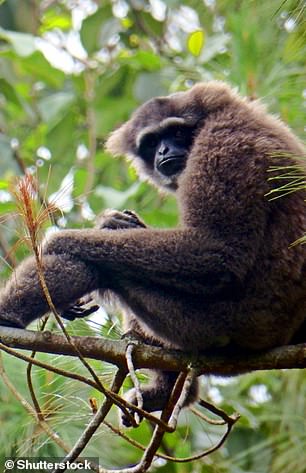 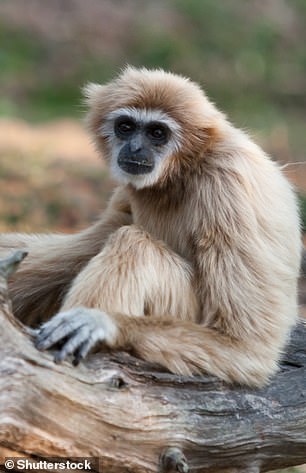 All studied species except the Javan gibbon (left) and the pileated gibbon (right) clearly mastered forearm, hand and finger skills in the same sequence

The Javan gibbon and the pileated gibbon were exceptions due to their particular styles of locomotion, which involve using long, hook-like hands and long forelimbs for swinging and climbing.

Most out of a total of 128 individuals in 36 species were shown to reach adult-level food manipulation competence before or around weaning – the transition from the mother’s milk to solids.

28 out of the 36 species demonstrated this competence before or around weaning, six at weaning and just two after weaning.

To illustrate the difference between species, researchers produced a phylogenetic tree of the 36 species and their age at which they demonstrated reaching an adult level of competence in terms of skills and dexterity with their hands and limbs. 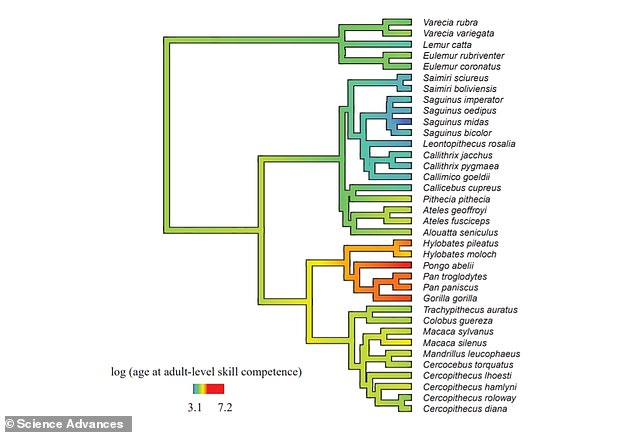 This phylogenetic tree of 36 species in the study and their age at which they reach an adult level of competence in terms of skills and dexterity with their hands and limbs. In red are six species that take longer to reach this level – pileated gibbon (hylobates pileatus), Javan gibbon (hylobates moloch), Sumatran orangutan (Pongo abelii), chimpanzee (pan troglodytes), bonobo (pan paniscus) and western gorilla (gorilla gorilla). On the other end of the scale – species that reached competence sooner – were red-handed tamarin (saguinus midas) and other species from the saguinus genus. Saguinus or Tamarins are squirrel-sized monkeys and typically have moustache-like facial hairs

On the other end of the scale – species that reached competence sooner – were red-handed tamarin (saguinus midas) and other species from the saguinus genus.

Saguinus or tamarins are squirrel-sized monkeys and typically have moustache-like facial hairs and look very different to apes. 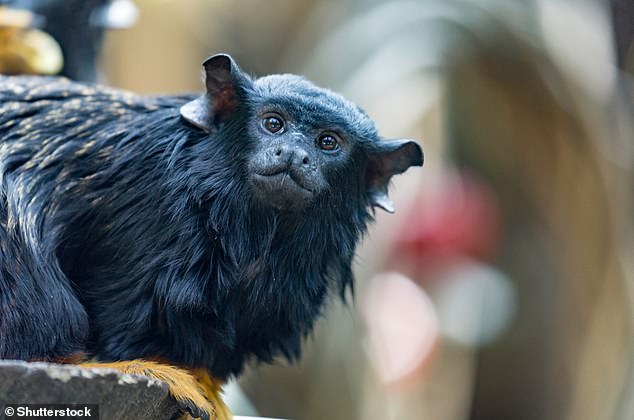 Red-handed tamarin (Saguinus midas), also known as the golden-handed tamarin or Midas tamarin. The new world monkey is named for the contrasting reddish-orange hair on its feet and hands 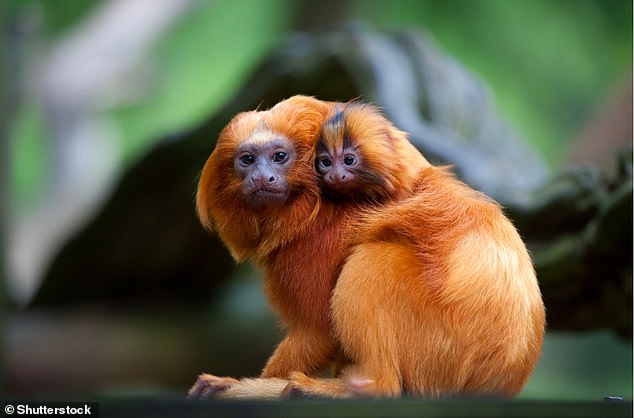 The team concluded that the age at which a species gained competence in food manipulation correlates with its adult brain size.

This supports the idea that traits associated with large brains are inherently linked to longer developmental durations.

Some species did not develop the most advanced skills – however, other species that took longer to become fully functioning adults (such as humans) did. 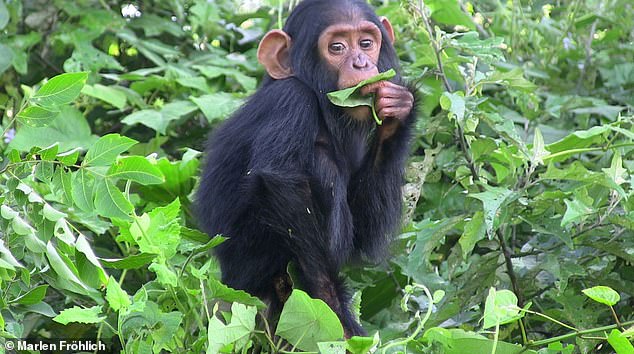 Dexterity comes at a cost: In species with large brains like chimpanzees (pictured), it takes a long time for infants to learn even the simplest hand and finger movements. This is not just because they are learning more complex skills in comparison to smaller brained species but mainly because they begin learning these skills much later

It takes human children generally around five to six years to learn complex hand movements such as eating with fork and knife or tying one’s shoelaces. By that age, many other nonhuman primate species such as squirrel monkeys (pictured) already have offspring of their own

Large-brained species such as macaques, gorillas or chimpanzees can solve much more complex tasks using their hands than primates with small brains such as lemurs or marmosets.

But in the end, dexterity comes at a cost – for species with large brains like humans, it takes a long time for infants to learn even the simplest hand and finger movements.

‘It’s not just because we are learning more complex skills than lemurs or callitrichids [a family that includes marmosets],’ said Dr Heldstab.

‘It’s mainly because we do not begin learning these skills until much later.’

The researchers think that the reason for this may be that the larger brains of humans are less well developed at birth. 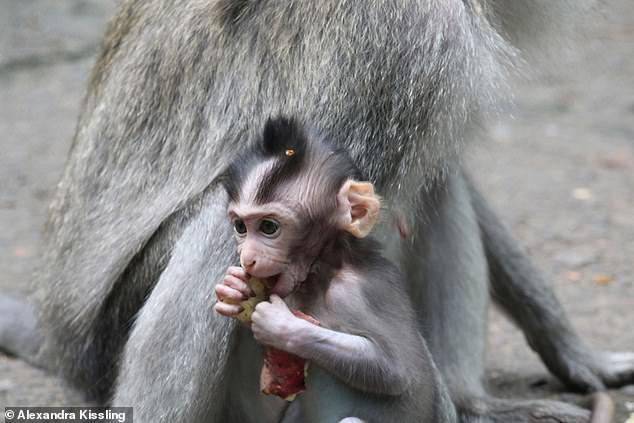 Learning takes time and is inefficient, and it is the parents who pay for this until their offspring are independent.

‘Our study shows once again that in the course of evolution, only mammals that live a long time and have enough time to learn were able to develop a large brain and complex fine motor skills including the ability to use tools,’ Dr Heldstab added.

‘This makes it clear why so few species could follow our path and why humans could become the most technologically accomplished organism on this planet.’

The study has been published in Science Advances.

WHEN DID HUMAN ANCESTORS FIRST EMERGE?

The timeline of human evolution can be traced back millions of years. Experts estimate that the family tree goes as such:

A recreation of a Neanderthal man is pictured

4 million years ago – Ape like early humans, the Australopithecines appeared. They had brains no larger than a chimpanzee’s but other more human like features

2.7 million years ago – Paranthropus, lived in woods and had massive jaws for chewing

2.3 million years ago – Homo habilis first thought to have appeared in Africa