Late in November, after three grinding years of begging, bartering, form-filling, false starts and blind alleys, and finally through the added pressures of a global pandemic, the wildlife team at Gorongosa National Park in Mozambique at last greeted the arrival of its newest celebrity: a female leopard, 3½ years old, from South Africa.

Gorongosa, a wildlife jewel, is steadily recovering from a violent civil war that wiped out nearly all the resident animals four decades ago. The release of the leopard — only the second in the park, after a male was discovered in 2018 — represents one more step in an ambitious plan to return the park’s vast and complex ecosystem to a state of sustainable vigor, with a dynamic balance between predator and prey.

The leopards’s traveling crate had been transferred from plane to truck, driven deep into a palm forest in the middle of the park’s 1,500 square miles and maneuvered beneath a sturdy Kigelia africana tree. Workers undid the straps that held the crate tightly closed, tossed a rope that was connected to the crate’s door over a tree branch, and threaded the dangling end through a small opening in a window of a team member’s truck.

“Then everyone hunkered down into safety in their vehicles,” said Paola Bouley, head of Gorongosa’s large carnivore restoration project. No milling about or open-air Land Rovers for this job. The leopard had been stuck in her glorified pet taxi for more than six hours, and because big cats don’t do well under sedation, she had been wide-awake the entire time.

A crew member started pulling slowly on the rope to open the door, prepared to see little more than a hi-and-bye blur of spotted fur. “We expected she’d just bolt out and disappear from our sight,” Ms. Bouley said.

Gregory Carr, an American entrepreneur turned philanthropist who formed a partnership with the Mozambique government to restore Gorongosa, figured he would be lucky to catch a two-second glimpse of the newest addition to the park’s expanding guild of top carnivores. “But that is not what happened,” Mr. Carr said. 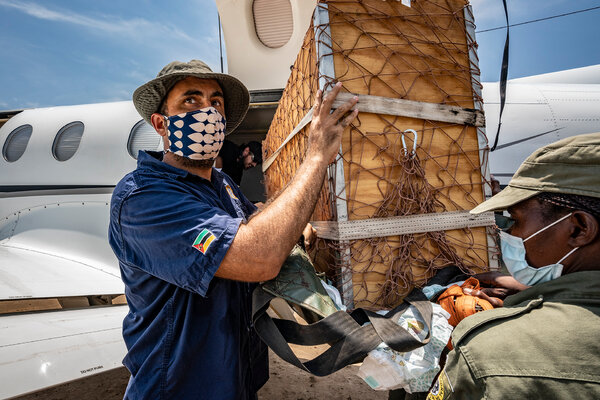 Instead, the leopard took her time. “She walked out sleek and stately,” he said. She sauntered like a model on a catwalk, past the cheering human gawkers in their vehicles, past a troop of curious baboons. She was 100 pounds of pure, apodictic muscle, her eyes tawny, her white whiskers jutting from her cheek pads like porcupine quills, her teeth as thick as thumbs. She headed gracefully across the plain, and for many minutes remained in view.

“For me there was an immense sense of relief,” Ms. Bouley said. “It’s been such a difficult year for everyone, but with this we felt like, wow, we achieved something beautiful.”

Within days, the leopard proved her predatory bona fides by killing two adult male impalas. “Leopards are not the biggest cats or the strongest cats,” said Rasmus Worsee Havmoller, a leopard expert at the Natural History Museum of Denmark. “But they are the most fierce.”

Return of the wild

Gorongosa today teems with virtually as many herbivores as it held before the war. The lion count keeps rising, and the reintroduction of African wild dogs in 2018 has been a runaway success: From a starter pack of 14, more than 80 dogs now romp through the park, applying teamwork to pull down and disembowel hoofed mammals many times their size.

But leopards once lived there, too, and scientists working in the park wanted them back. For one thing, leopards are the primary predators of baboons, which are large and sometimes destructively omnivorous, and in the absence of leopards Gorongosa’s baboon population had ballooned to over 10,000.

For another, leopards are among the most widely distributed of all cats, found in some 75 countries across Africa, Asia and the Middle East. But leopards, like most of the world’s megafauna, are fast losing ground to the needs and whims of the human race. Scientists estimate that the leopard’s range has shrunk by at least 75 to 80 percent compared to historical norms, and the International Union for Conservation of Nature recently shifted the status of leopards from “not threatened” to “vulnerable,” the first stage in the “endangered” category.

How absurd, then, that leopards were not yet players in Gorongosa’s rebirth, which the primatologist and evolutionary theorist Sarah Blaffer Hrdy referred to in an email as “a beacon of hope in an increasingly discouraging world.”

To the cognoscenti, “leopards are the iconic cat,” said Luke Hunter, executive director of the Wildlife Conservation Society’s big cats program. “They’re mostly solitary, they have to kill for a living, and they’re very efficient at doing exactly that.”

They are also the most versatile and unpredictable of the Panthera crew, at once stealthy and brash, antisocial and plugged in. “They have a bit of attitude to them,” said Alan M. Wilson of the Royal Veterinary College, who has studied leopard movement patterns and athletic performance. If you irritate leopards, he said, “they’ll come back to have a conversation with you.”

New research on leopards in Tanzania suggests that males and females avoid potentially unpleasant “conversations” over food by adhering to different hunting styles and schedules. Males are night hunters and, being 50 percent bigger than females, will target big, meaty quarry like gemsbok and kudu. Females are active from dawn through midmorning and again around dusk, and they will consume pretty much any animate matter they happen on, from antelope and baboons down to lizards, birds, rodents and dung beetles.

Mother leopards have an added incentive to minimize the risk of encountering an unfamiliar male. Researchers have found that the rate of infanticide among leopards is quite high: As many as four in 10 leopard cub deaths occur at the mouths of interloping adult males, who, by destroying any little leopards they encounter, just may prod the local mothers back into a state of receptive fecundity.

For this and other reasons, leopards are highly territorial, ever prowling the neighborhood to keep tabs on familiars and quickly identify strangers. “The way we think about solitary cats is flawed,” Dr. Hunter said. “Leopards may not hang out together, but they have a rich social network that we don’t always observe, and they know as much about their network as lions do.”

Hostility is by no means inevitable. Males are as accommodating to cubs they likely have sired as they can be lethal to those they have not. “A male assumes that cubs in his territory are his, and he is very protective and even playful with them,” Dr. Hunter said.

One thing leopards don’t do is boast about the size of their kingdom through booming roars. Leopards share with lions, tigers and jaguars the extended larynx and bony hyoid apparatus that allows the elite Big Four to roar, but the leopard’s roar is emphatically low-key, “more akin to sawing a tree,” said Ms. Bouley, or even to the coughing jag of a domestic cat.

A leopard hunts silently and surreptitiously and will often guard its kill from competing meat eaters arboreally, using the massive muscles of its chest, shoulders and neck to haul a carcass into a tree. “There are records of leopards taking up a baby black rhino and a young giraffe,” Dr. Hunter said.

Leopards are consummate opportunists, and over time have adapted to a broad variety of habitats: deserts, rainforests, frozen tundras, mountains, the outskirts of major cities. Leopards cohabit the Himalayas with their semi-distant cousins, the snow leopards. In Mumbai, leopards often prey on stray dogs, and people joke that, by killing dogs that may be rabid, the cats perform an important public health service.

All leopards belong to the same species, but subspecies can differ drastically in size and appearance, and genomic studies by Dr. Havmoller and his colleagues now under review for publication reveal a corresponding degree of genetic variability between leopard populations.

As a result, Arab leopards are petite, about half the size of their African counterparts; the leopards of Siberia grow super-fluffy, heat-trapping coats in winter; and Malaysian leopards are overwhelmingly melanistic, their dark rosette spots obscured in a dark background that offers considerable camouflage in a rainforest and that has led to their being tagged black panthers.

It is the spotted variety of leopard skin that has long attracted human fancy, with often grim results. After Jacqueline Kennedy showed off her new Oleg Cassini leopard skin coat in 1962, the resulting fashion frenzy led to the slaughter of tens of thousands of leopards, jaguars and other spotted cats, an outcome for which both designer and first lady expressed deep regret.

The long history of trafficking in leopard skin, leopard teeth and other leopard body parts is what made it difficult for Gorongosa to import a leopard into the park. “We were shut down time and time again,” Ms. Bouley said.

But in 2018, when camera trap photos indicated that a male leopard had moved into the park of his own accord from the surrounding area, the team decided it would push to find him a mate.

Eventually, a call came in from private landowners in South Africa eager to remove a female leopard from their property, and Gorongosa had met its match. Pedro Muagura, the park warden, christened the leopard Sena, which in a number of languages means Earth’s grace.

There will soon be grace to spare. In December, Mr. Carr signed an agreement with the Mozambican government that will extend environmental protections and local community control around the park by another 1.1 million acres, to create an unbroken “mountains to mangroves” corridor fit for roaming. If the park is going to have a couple of hundred leopards someday, Mr. Carr said, “they’ll need a place to live.”