For the International Space Station, Leroy Chiao was, in a sense, there before the beginning.

In October 2000, he was one of seven astronauts on the space shuttle Discovery, which brought pieces of the nascent space station to orbit. Construction had begun a couple of years earlier. But no one was living there yet.

Much of the work on Dr. Chiao’s flight was done outside the space station, during spacewalks. But the astronauts also got to go inside briefly.

“It had that new-car smell,” Dr. Chiao recalled.

It was a runt of a space station then. The habitable portion consisted of just three modules, not the 16 orbiting today. But it was ready for people to move in.

Discovery undocked on Oct. 20 and returned to Earth. Eleven days later, three astronauts — William Shepherd of NASA and two Russians, Sergei Krikalev and Yuri Gidzenko — blasted off in a Russian Soyuz rocket from the Baikonur Cosmodrome in Kazakhstan. 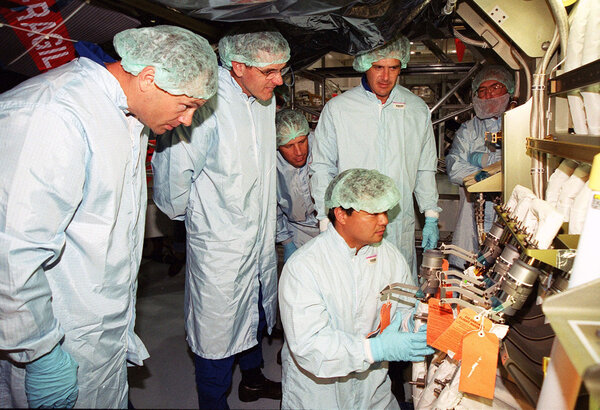 On Nov. 2, 2000, they docked at the space station and began their four-and-a-half-month stay in orbit.

Humans have been living off the planet ever since.

Monday is the 20th anniversary of continuous occupation of the International Space Station. The project was pitched as post-Cold War space cooperation between the United States and Russia, although for many its cost — well above $100 billion — made it a poster child of inefficient government megaprojects.

In the past decade, however, the station has, somewhat unexpectedly, turned into the linchpin for spurring capitalism in space, potentially leading to new industries and the possibility that more people will head to orbit.

Research conducted on the space station has yet to discover a cure for cancer or osteoporosis. And it has not generated a technological breakthrough that would transform life on Earth. But it has given NASA and other space agencies the knowledge and experience of how to build complex machinery in space, and insight into how microgravity affects the human body.

“The whole thing is an experiment of, Can humans live in space for long periods of time, operate in this challenging environment, and do it safely, do it successfully?” said Scott Kelly, one of the space station’s most prominent residents, who spent nearly a year in orbit, beginning in March 2015. “If that’s one of your main objectives of the program, I think it has been a great success.”

Ashes of the Cold War

An orbiting space station has long been seen as a steppingstone to the rest of the solar system. In the afterglow of the Apollo 11 moon landing in 1969, a task force led by Vice President Spiro T. Agnew recommended ambitious follow-up space goals like a reusable space shuttle and a space station with the aim of sending astronauts to Mars as soon as the 1980s.

President Richard Nixon, trying to rein in the federal budget, gave NASA the go-ahead only for the shuttle.

The upper stage of one of the Saturn 5 rockets from one canceled moon mission was turned into Skylab, a space station for three NASA missions in 1973 and 1974. But it had crashed back to Earth by the time the space shuttles began flying in 1981.

In 1984, President Ronald Reagan announced plans to build a space station he later christened Freedom. But after years of designs and redesigns, no piece of Freedom was ever built. In June 1993, the House of Representatives narrowly voted to keep it going.

That year, the Clinton administration was in the process of transforming Freedom into the International Space Station. And in September 1993, Russia, which had decades of experience operating the Salyut and Mir outposts in orbit, signed on as a partner. The member nations of the European Space Agency as well as Canada and Japan also took part.

“The International Space Station came out of the ashes of the Cold War,” said Jeffrey Manber, chief executive of Nanoracks, a company that has found a profitable business taking commercial payloads to the space station.

The project also created work for Russian aerospace engineers who might otherwise have offered their expertise in building ballistic missiles to countries like Iran or North Korea.

“There was a very strong reason to build a Taj Mahal in space made up of most of the space-faring industrial nations of that time,” Mr. Manber said.

Houston, We Have No Problem

The first module, Zarya, built by Russia but financed by NASA, launched in November 1998. A couple of weeks later, the space shuttle Endeavour brought up Unity, the first American-built piece, which connects the Russian- and NASA-led segments. A Russian module, Zvezda, launched in July 2000.

Those were the ones that were there when Mr. Shepherd, Mr. Krikalev and Mr. Gidzenko set up home. “Through the whole flight, there wasn’t really a typical day,” Mr. Shepherd said.

The 20-year streak of humans in space did not begin grandly.

“The initial two or three weeks was fairly cramped, because the station had to be kind of opened up gradually,” said Mr. Shepherd, a former member of the Navy SEALs who served as the commander of the first crew. “We could not turn everything on and go everywhere in the station initially.”

They set up systems such as scrubbers to keep carbon dioxide levels from building up, stowed cargo, attached components brought up by space shuttles, fixed things that broke and even ran a few experiments.

Unlike today, communications between the station and the two control centers, in Houston and Moscow, were spotty. The astronauts were out of contact with the rest of humanity on the ground sometimes for hours at a time.

“In some situations it’s even more convenient that way,” Mr. Krikalev said on Thursday at a news conference in Moscow commemorating the anniversary. “If crew members constantly stayed on call, they’d have no time to do their jobs.”

By the time the three astronauts returned to Earth in March 2001, Mr. Shepherd said, “the conditions on the space station, I thought, were actually pretty good — we were comfortable.”

It was another decade before construction on the International Space Station was considered complete, with a lull of more than two years when the space shuttles were grounded after the loss of Columbia in 2003.

“All the terrible catastrophes for the shuttle meant that all of us, Americans and Russians, we had a long period of just maintaining the station,” said Pavel Vinogradov, a Russian astronaut who reached the station in 2006 when it was operating with a skeleton crew of two in what he called “survival mode.”

But when the shuttles were cleared to fly again, progress on construction resumed.

“I would tell you, looking back on it, it went way, way better than we could have ever hoped,” said Michael T. Suffredini, who served as NASA’s space station program manager for a decade, from 2005 to 2015.

Imagine building large pieces of machinery that have to interlock precisely but not having any chance to check that they do indeed fit before they are launched to orbit.

The modules of the space station, each about the size of a school bus and built in factories thousands of miles apart, came together seamlessly. “That’s an amazing feat,” Mr. Suffredini said. “This is by far the largest, most complicated spacecraft ever flown.”

That does not mean everything always went smoothly. Computers crashed, cooling systems failed, leaks popped up and the toilet broke.

In 2007, a particularly dire mishap almost crippled the station.

As astronauts were trying to unfurl a 112-foot solar array, it ripped. “That was pretty exciting because we didn’t have a replacement for it,” Mr. Suffredini said.

One solution would have been to jettison the damaged panel. But without any spares available, the station would be power-starved for years.

Engineers improvised a solution that repaired the tear and allowed the panel to be fully extended. Using materials on the station, astronauts made what were nicknamed “cuff links” — lengths of wires with connecting tabs at both ends. They were installed during a spacewalk by a NASA astronaut, Scott Parazynski, that lasted more than seven hours.

Peggy Whitson’s three trips to the space station pushed her to the record for the most cumulative time in space by an American: 665 days. Across that time, she experienced the station’s evolution from a construction site to a premier orbiting laboratory where astronauts could spend more time tending to experiments.

For her first trip, in 2002, she was a flight engineer, using the station’s robotic arm to put pieces of the station in place. On her second mission, starting in 2007, she was the first woman to serve as commander. In those years, the astronauts spent most of their days as construction and maintenance workers to keep the place running.

By her third trip, which began four years ago, the size of the crew had expanded to six, and Dr. Whitson, a biochemist by training, was finally able to spend much of her time as a scientist.

“I’ve done everything from soybeans to superconductor crystals, but on this last mission, I got to do a lot of stem cell and cancer studies and bone studies,” Dr. Whitson said. “The quality and quantity of science that we were doing has really been enhanced.”

The station is to remain in orbit until at least 2024, and Mr. Suffredini is now looking to apply what has been learned to commercial space stations. He is president and chief executive of Axiom Space, a Houston company that NASA selected in January to build a commercial module to add to the International Space Station.

When the current space station is retired, the Axiom module would become the core of an Axiom space station. “Our whole company is founded on that premise that we can do it a lot less expensively,” Mr. Suffredini said.

Nanoracks, Mr. Manber’s company, is also developing a concept for a commercial outpost that would operate robotically most of the time and thus more cheaply. It would also enable experiments and manufacturing in space that would be too dangerous if there were people around. Astronauts could periodically visit.

Mr. Suffredini said the current trajectory of life in orbit followed the path of previous exploration of new territories. “In any government exploration in the history of mankind, you send out a few people that are government funded to go do a relatively risky thing, just to see what’s there,” he said.

If there’s anything of value, the pioneers follow and eventually the settlers. “In order to establish low-Earth orbit,” Mr. Suffredini said, “we need to get to the pioneering stage, which is what we’re really doing.”