Swarms of synchronous fireflies are rather like melting ice, or at least that’s how Rafael Sarfati, a physicist, sees it. Ice remains solid until it warms to a certain temperature and becomes a liquid. Likewise, a loose swarm fireflies will flash the lanterns in their abdomens randomly. But when the swarm reaches a certain density, the fireflies begin to blink in unison.

“Above that threshold, it is almost perfect synchronization,” with rhythmic, coordinated waves of light, said Dr. Sarfati, a postdoctoral associate at the University of Colorado, Boulder.

The spontaneous synchronization of certain species of fireflies, such as Photinus carolinus in the Great Smoky Mountains in North Carolina and Tennessee, has long baffled humans who observed the peculiar mating ritual, in which blinking males strive to attract the attention of ground-level females. Early-20th-century scientists dismissed the phenomenon as accidental or blamed it on puffs of wind or the twitching eyelids of the people who made these reports, according to one 1935 review in Science.

In the past 50 years, scientists collected anecdotal observations of these unified flashes but not enough empirical data to truly study firefly synchronization’s mechanisms.

Now, Dr. Sarfati and Orit Peleg, a physicist and assistant professor also at the University of Colorado, have filmed the mating hordes of P. carolinus and mapped their flashing patterns in three-dimensional space. Their research, published Wednesday in the journal Science Advances, adds to evidence that the insects sync their flashes, and suggests what may drive that coordination.

“I appreciate the excellent experimental work carried out by the authors,” Gonzalo Marcelo Ramírez Ávila, a researcher who studies synchronization at the Higher University of San Andrés in La Paz, Bolivia, who was not involved in the research, wrote in an email. He added the paper will improve future models of firefly synchronization.

“Their findings confirm what I have seen with my own eyes in the wild for the past 30 years of field work,” said Lynn Frierson Faust, the author of “Fireflies, Glow-worms, and Lightning Bugs,” who is known as the Lightning Bug Lady of Tennessee.

Dr. Peleg first learned about the phenomenon in an undergraduate physics class, when the insects were offered as an example of synchronization in nature. When Dr. Peleg started her own lab, she knew it was her chance to study fireflies.

From prior research on the Great Smoky’s fireflies, the researchers knew the fireflies flashed only if the swarm reached a high enough density. So they reached out to the Great Smoky Mountains National Park, which holds an annual synchronous firefly viewing event, and coordinated with park entomologists and Ms. Faust to find an ideal filming spot in the thick of the luminescent fog of mating in June 2020. “We walked miles and miles,” Dr. Peleg said. “But we never saw the end of the swarm.” 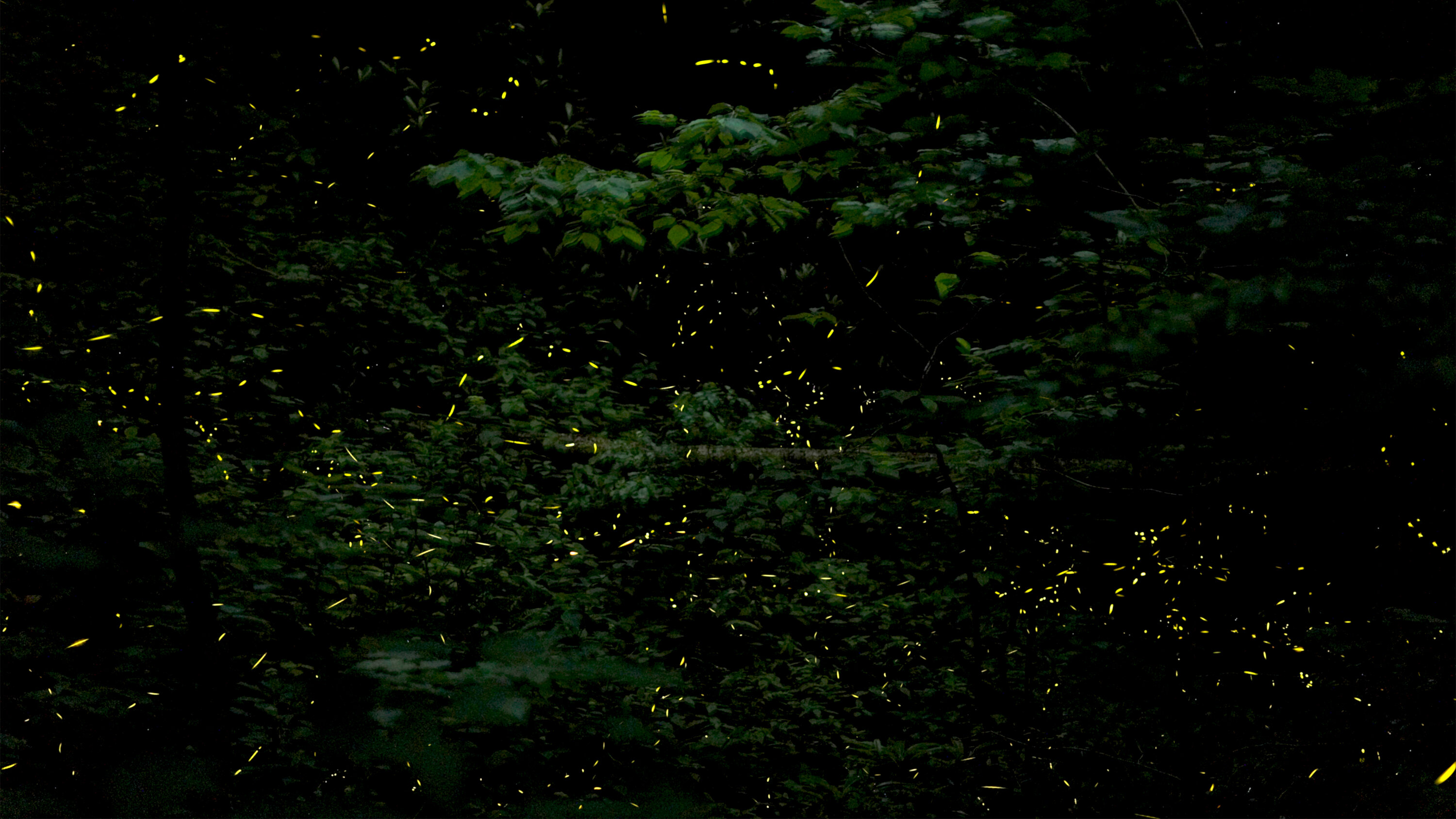 Dr. Peleg and Dr. Sarfati placed two cameras 13 feet apart on the ground with an overlapping field of vision. Like producers on a movie set, they calibrated the feeds with a checkerboard and an initial artificial light signal. The overlapping footage allowed the researchers to reconstruct a cone-shaped area of the fireflies’ flashes in three dimensions. The researchers also placed two cameras in the middle of the vegetation in an attempt to see the swarm through the eyes of a participating firefly. As their cameras recorded, they waited quietly by the edge of the clearing, watching the ribbons of twinkling lanterns.

The 3-D reconstruction allowed the researchers to characterize several complex patterns in the swarm’s behavior. The male fireflies did not flash instantaneously, but rather in a cascading wave across the swarm. For example, sometimes the flashes would begin at the bottom of the ridge and move toward the insects at the top. This relay-like propagation of flashing suggests that fireflies interact with the swarm locally, taking their cues from the fireflies around them, Dr. Peleg said.

This propagation pattern is also found in other animal swarms such as schools of fish, she added, where local interactions between fish can ripple out to the entire group.

“I see my neighbor is flashing, so I flash as well,” Dr. Sarfati explained.

The reconstruction also revealed that the flashes often occurred in bursts where one flashing firefly on the move would incite other, slower moving insects to flash, too. This observation suggests there is no clear firefly leader or single locus of activity, said Andrew Moiseff, an associate dean for behavioral and life sciences at the University of Connecticut who has researched the Great Smoky’s synchronizing fireflies since the 1990s.

Dr. Moiseff, who advised the researchers, said their findings confirmed what he expected after years in the field. “It’s spectacular,” he said, adding that the 3-D approach had already offered insight into the mechanisms behind the swarm that he had not known how to address in his early research.

Though the new paper offers insights into the flashing swarm, many factors remain unknown, such as how individual fireflies respond to their kin from variable distances or multiple flashes from different individuals, Dr. Peleg said.

She thinks the holy grail would be a model that can explain how individual fireflies perceive the flashes around them and decide to flash themselves, thus reproducing the communal flash pattern of the swarm. “Then I can die in peace,” Dr. Peleg added.

Dr. Peleg is now conducting experiments on how fireflies respond to artificial light to refine her mathematical models. Next June, she will be back out in the Great Smoky Mountains, watching from the edge of the swarm.