Denmark’s mink industry is gone, a victim of the coronavirus. The nation killed all its 17 million mink because of fears of a mutation in the virus that had spread from mink to people.

Separately, in Utah, farmed mink infected with the virus seem to have passed it on somehow to at least one wild mink, raising concern about whether the virus will find a home in wild animals. And around the world, farmed mink continue to fall victim to the coronavirus.

The United States, the Netherlands, France, Spain, Italy, Sweden, Canada, Greece and Lithuania have all reported mink infections to the World Organisation for Animal Health.

Not only are mink the only nonhuman animal known to become severely ill and die from the virus, they are the only animal known to have caught the virus from humans and then passed it back. What terrified Danish officials was that the virus that jumped back to people carried mutations that seemed as if they might affect how well vaccines work, although that worry has faded.

Even if the mutations that have emerged so far don’t pose a danger to humans, it is clear that the virus rampages through mink farms once infection begin and continues to mutate in new ways. Some mutations that have evolved in humans have already made the virus more easily transmitted. From a public health point of view, there is no upside to offering the virus a second species in which it can evolve.

The Netherlands, which was already planning to ban mink farming for animal welfare, reasons, moved up the ban to next year from 2024 and has culled all its mink. The disease is such a threat to the industry that researchers are working on a vaccine for mink. And scientists who track viral infections in animals are concerned.

For Denmark, the mink story appears to be over. The country of about six million people produced 15 million to 17 million skins a year for the fur industry. But mink farming is banned for 2021, and a fallow year will mean that workers and infrastructure will disappear.

“It is highly, highly unlikely that they’ll be able to restart farming” in the future, said Mark Oaten, the head of the International Fur Federation. A minister resigned because the government had apparently overstepped its authority in ordering the culling of all mink, farmers are still negotiating for compensation and the nation’s prime minister wept at the plight of the farmers. 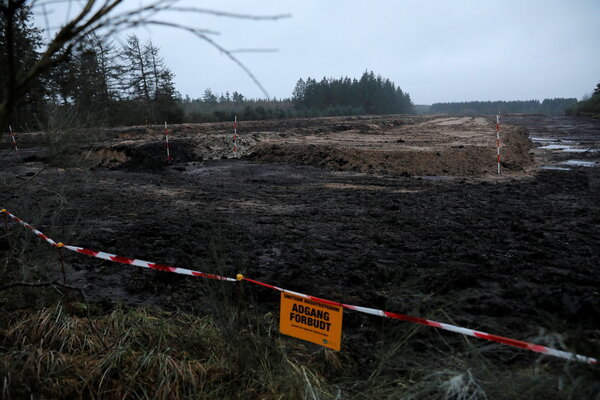 Now, the Danish government faces another spectacle as it plans to exhume mink carcasses that were improperly buried and in some cases began to rise from the ground, swollen with the gases of decomposition.

It has the feeling of a dark dystopian comedy, and the oddest thing of all may be that the mink themselves did not have much of a future anyway. Most, except for breeding stock, are killed every year.

Apart from lost business and jobs, threats to the fur industry might seem to many people to be the least of the worries posed by the pandemic. But the Danish mink nightmare is a reminder of the central role animals play in human pandemics. The virus seems to have come from bats, passing through some other animal on the way, and could easily enough pass from us to another kind of wild animal, establishing what epidemiologists call a reservoir, a permanent lake of disease waiting for us to fall in or sip from.

Mink are also intriguing because they have proved to be unusual in their susceptibility to illness. Early fears that pets could catch the virus from their owners were entirely justified, but not that worrisome because while cats and dogs do become infected, neither species gets very sick. The same is true for tigers, lions and snow leopards, which have all become infected naturally, from people, and animals like monkeys, hamsters, ferrets and genetically engineered mice that scientists infect on purpose in the laboratory.

Because of ferrets, it was expected and predicted that members of the weasel family, like mink, would be easily infected. But the severity of the illness in mink was not anticipated.

Stanley Perlman, an expert on coronaviruses at the University of Iowa who has been researching SARS-CoV-2 primarily with genetically engineered mice, pointed out that ferrets develop “very, very mild disease.”

Mink, like people, often die from infection with the virus, and nobody knows why. “This is a key thing,” Dr. Perlman said. “Why do people get sick? Why do we react so differently to these viruses.” He said he had thought about studying mink, but the challenges, involving their genetic diversity and the lack of an established set of biochemical tools for studying infections in them, made the prospect difficult.

Some parts of the mink puzzle fit easily together. They live in crowded conditions in rows of cages on mink farms, like people in cities, and are in constant contact with the humans who care for them. No surprise then, that they not only caught the virus from people, they passed it back to us.

And the infection of mink and the potential danger they pose is a reminder that it isn’t only wild animals that are the cause of spillover events. The livestock humans housed in close quarters have always given diseases to humans, and acquired diseases from them. But it required big human settlements for epidemics and pandemics to appear.

In a 2007 paper in the journal Nature, several infectious disease experts — including Jared Diamond, the author of “Guns, Germs and Steel: The Fate of Human Societies” — wrote about the origins of diseases that spread only in relatively dense human populations. Measles, rubella and pertussis, they wrote, are examples of crowd diseases that need populations of several hundred thousand for a sustained spread. Human groups of that size did not appear until the advent of agriculture, around 11,000 years ago.

The authors listed eight diseases of temperate regions that jumped to humans from domestic animals: “diphtheria, influenza A, measles, mumps, pertussis, rotavirus, smallpox, tuberculosis.” In the tropics, more diseases came from wild animals, for a variety of reasons, the authors wrote.

There may have even been an earlier coronavirus epidemic that came from cattle. Some scientists have speculated that one of the coronaviruses that now causes the common cold, OC43, may have been responsible for the flu epidemic of 1889, which killed a million people.

More recently, contact between wild animals and farmed animals resulted in outbreaks of Nipah virus, which is carried by fruit bats and can cause severe respiratory illness in humans. In Malaysia in 1998, the virus spread from bats to pigs to people.

In that case, fruit trees were growing next to pig enclosures and pigs became infected through exposure to the feces of large fruit-eating bats. But part of the reason was also that pig farms had grown as pig farming changed from small operations to large, offering more of a chance for any disease to spread.

Jonathan Epstein, vice president for science and outreach at EcoHealth Alliance, a nonprofit organization that works on studying and preventing spillover events, said growth of the pork industry in Malaysia meant that “rather than a couple hundred pigs on lots of different farms, we now had a farm of 30,000 pigs and zero barrier between those animals and wildlife.” Laws now require a separation of orchards and pig enclosures.

Big is not always worse, however, according to William E. Sander, a veterinarian and public health specialist at the College of Veterinary Medicine at the University of Illinois at Urbana-Champaign. For example, large industrial farms in the United States pay a lot of attention to biosecurity and disease surveillance because of the danger of a disease sweeping through a large and genetically similar group of animals, broiler chickens, he said. Backyard chicken operations are much looser, although since they are small, they pose less risk for a large outbreak.

It may, in fact, be in the middle where the dangers arise in animal operations, Dr. Epstein said.

Several years ago, a study looking at avian influenza, particular the H5N1 virus, was conducted to assess whether large or small farms were greater risks.

Computer modeling, he said, showed that “it was actually the intermediate-sized farms that were both large enough to have enough domestic animals on them while still intermingling with wild, migratory water birds that created the most risks.” Small farms didn’t have enough animals to support an outbreak, and large farms were considered more likely to have effective barriers.

Dr. Epstein said that farms should be monitored for spillover possibilities, just as wild animal populations are.

In the case of mink, it is not spillover exactly, since they are giving the virus back to humans. Many Danish farms were quite large, with 20,000 or more mink. “The biosecurity in Denmark was really high,” said Mr. Oaten of the International Fur Federation. “These are actually big, big, big farms.”

The presence of the disease on mink farms has, of course, brought more attention to the whole issue of fur and fur farming from animal welfare and animal rights groups. Direct Action Everywhere, an animal liberation activist group, has been highly critical of both Oregon and Utah for a lack of transparency surrounding infected mink farms in those states.

Globally, however, the mink infections have not hurt the market for fur, according to Mr. Oaten. But concerns of scarcity because of the pandemic increased the price of mink pelts by more than 40 percent, he said.

A number of countries in Europe have banned mink or fur farming altogether, based on animal welfare concerns. But in the long term, Mr. Oaten said he expected other countries like Poland, Greece, Canada and the United States to pick up the slack, raising more mink.

Also, in the future, mink may receive protection from the virus. “I’m hoping by January we’ll be in a position to say more about this,” Mr. Oaten said, “but there’s a lot of research taking place in Russia and Finland on a vaccine for the mink.”