It isn’t easy to say that anything has truly “gone extinct.”

For starters, an untold number of creatures — especially teensy, nocturnal or otherwise cryptic ones — have vanished before humans ever noticed them.

Once biologists suspect a documented species’ extinction, the challenge shifts to proving whether it has disappeared forever, or just disappeared from sight.

Even when scientists are 99 percent certain something is gone, they may never know whether pathogens, habitat disturbance, invasive species, climate change or some other force drove them out of existence.

“There’s a sense that we’ve got it down — that we know our flora and we know what’s extinct,” said Anne Frances, the lead botanist for NatureServe, which promotes wildlife conservation. That belief couldn’t be further from the truth, she said.

In a study published in August in Conservation Biology, Dr. Frances and 15 other researchers from across the United States quantified how many trees, shrubs, herbs and flowering plants have vanished from North America since European settlement. After compiling existing information on presumed extinct species and working with local botanists to vet the data, the group narrowed down a list of 65 plant species, subspecies and varieties that have been lost forever in the wild.

That figure is almost certainly an underestimate, said Wes Knapp, a botanist at the North Carolina Natural Heritage Program and a co-author of the study.

“That 65 is not rock solid,” he said. “We’re still documenting what’s on the ground, and you can never really prove a hypothesis like ‘extinct.’”

After all, scientists rediscover extinct species all the time, as well as uncover secret extinctions hidden in natural history museum collections.

“Humans like to put things into neat categories, but nature doesn’t present itself that way,” Dr. Frances said. “Every plant on this list is its own little mystery.” 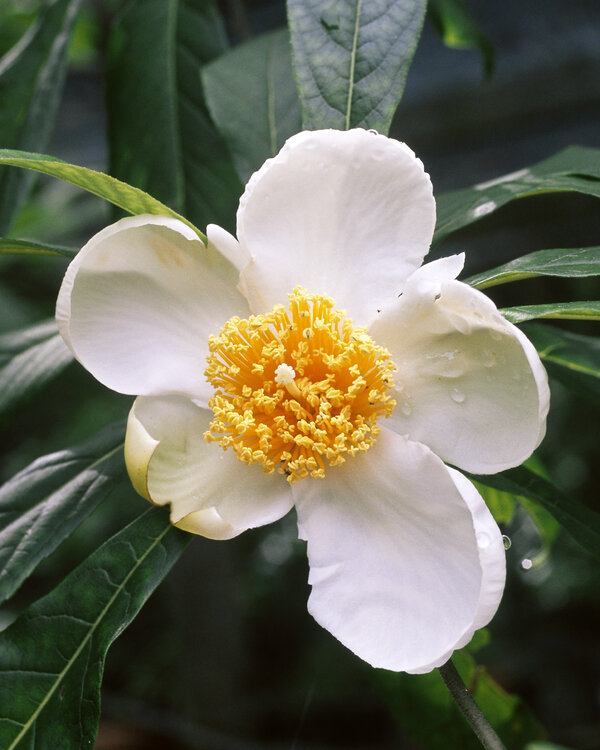 Despite the fact that it’s extinct, you could reasonably venture upon Franklinia alatamaha.

Considered “extinct in the wild,” the Franklinia tree — along with six other plants listed in the recent study — now exists only in cultivated spaces such as arboretums or botanical gardens.

John Bartram, King George III’s botanist in the Americas, and his son William first described the species (and named it for family friend Benjamin Franklin) after stumbling upon the unfamiliar tree along Georgia’s Altamaha River in 1765.

In a lucky twist, the younger Mr. Bartram returned a few years later to collect seeds and cuttings, and brought them to Philadelphia where the first cultivated Franklinia tree bloomed in 1781. Within a quarter-century, in 1803, the species was spotted in the wild for the last time.

Today, any Franklinia trees you might encounter in cemeteries, gardens and parks are descendants of Mr. Bartram’s cultivations. “It wasn’t meant to prevent extinction,” Mr. Knapp said, “but it did.”

It’s unclear how the tree disappeared, though some have suggested a soil-borne cotton pathogen, over-collection by nurseries or a change in regional fire frequency could have played a role in its demise.

“What we have is conjecture. We really have no idea why it’s gone,” Mr. Knapp said. “But you can buy it if you go to the right place.”

How do you lose a 3-foot-tall daisy forever? By mistaking it for a different flower.

At least, that’s what happened to Marshallia grandiflora, a large flowering plant last collected in 1919.

Native to two western counties in North Carolina, the species was, until this year, incorrectly lumped in with a different, more wide-ranging daisy.

In comparing current Marshallias with older herbarium specimens, a trio of botanists noticed a remarkable size and shape difference.

By the time it was first described in June, the “new” species was long extinct, for reasons that are not known. Three other extinct plants listed in the new paper were also similarly discovered in natural history collections within the last 25 years.

“We’re still doing the basic science to untangle what the species are,” said Alan Weakley, director of the University of North Carolina, Chapel Hill’s Herbarium, and a co-author of the study. “There are undoubtedly more undescribed extinct species sitting in herbaria, collected 100 years ago.”

Native Americans historically ate the young stems of Solomon’s seals, a wildflower belonging to the same family as asparagus, or cooked their starchy roots into breads and soups. Today, the species continues to be used in herbal medicine.

While most of small Solomon’s seal is doing just fine in the wild, one of its varieties, Polygonatum biflorum var. melleum, is presumed extinct.

Scientists are split on whether the melleum variety, last collected in 1930 and believed to be native to Michigan and Ontario, is distinct enough to be categorized apart from other Solomon’s seals.

“It’s really murky. The data argues it may or may not even be real,” Mr. Knapp said. “This is on the fringe.”

While the melleum variety made the cut for August’s paper, uncertainty over the existence or status of hundreds of plants left them off the list in their study.

In 1912, Norma Etta Pfeiffer, a 24-year-old graduate student at the University of Chicago, made a marvelous botanical discovery near Chicago’s Lake Calumet: a truly teensy plant adorned with bead-sized flowers.

The plant, which she named Thismia Americana, belongs to a rare genus that lives as a parasite on subterranean fungi, stealing their energy instead of converting sunlight through photosynthesis.

“They’re small and cryptic and mostly underground. We don’t even know much about the ones we’ve described,” said Paul Marcum, a botanist at the Illinois Natural History Survey.

Like almost two out of three of the plants listed in August’s study, Thismia Americana is only ever known to have existed in one location, making it extremely vulnerable to any changes in land use.

That hasn’t kept subsequent generations of Chicagoans from hunting for it — although Field guides for Thismia seekers offer little help: “Where to look: Honestly? Your guess is as good as ours.” The species has not been spotted since 1916.

“It’s the holy grail,” Mr. Marcum said. “I still believe it could be out there. I think somebody will be on their hands and knees searching in the soil, and get lucky.”

The Franciscan Manzanita has endured not one, but several brushes with extinction.

The shrub species, Arctostaphylos franciscana, was presumed to be extinct in the wild for nearly 70 years, stamped out by construction in San Francisco’s Presidio park.

Then, in 2009, Daniel Gluesenkamp, now the executive director of the California Native Plant Society, stumbled upon Franciscan Manzanita in overgrown vegetation near Golden Gate Bridge Park.

Unfortunately, the site of its rediscovery lay directly in the path of a “shovel ready” project. “The next best thing we could do was dig this thing up and move it,” Mr. Knapp said.

Conservationists relocated the shrub to a protected site and it began propagating. Like the Franklinia tree, the Franciscan Manzanita is now considered extinct in the wild.

“Part of me is sad that we couldn’t allow it to exist in its last remaining natural spot,” Mr. Knapp said. “It’s not a great solution, but it’s much better than being extinct.”