The notion that houseplants can meaningfully improve indoor air quality is ‘simply a myth’, a new study has found — with potted plants being practically as useful.

Researchers found that it would take up to 93 plants per square foot of floor space to compete with an office ventilation system.

The same effect can also be achieved in a house by opening a couple of windows.

Pot plants may brighten up our homes and office spaces — but their atmosphere-cleansing abilities are ‘vastly over-stated’, the team conclude.

By reviewing decades of studies, experts found that plants soak up dangerous chemicals too slowly to have any kind of significant impact. 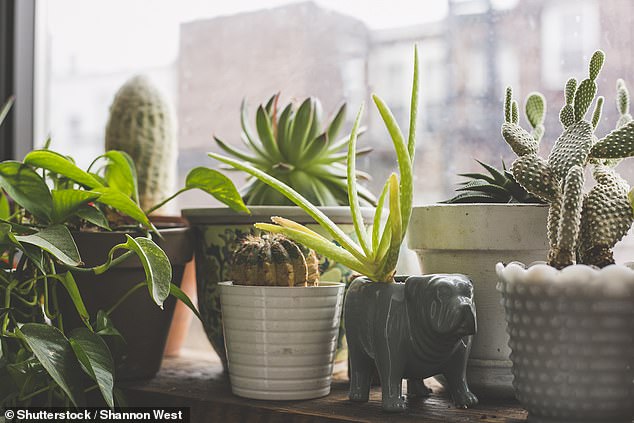 The notion that houseplants can meaningfully improve indoor air quality is ‘simply a myth’, a new study has found — with potted plants being practically as useful

‘This has been a common misconception for some time,’ said paper author and environmental engineer Michael Waring of the Drexel University in Philadelphia.

‘Plants are great, but they don’t actually clean indoor air quickly enough to have an effect on the air quality of your home or office environment.’

Professor Waring and colleagues found instead that ventilation systems — or even opening a window — reduce volatile organic compounds (VOCs) much quicker than plants can extract them from the air.

These potentially toxic chemicals are released by everything from paint and printers to cleaning chemicals and dry-cleaned clothes.

The Royal College of Physicians has estimated that indoor air pollution contributes to 99,000 deaths in Europe every year.

Many people also believe they suffer from ‘sick building syndrome’, in which stagnant, polluted air is blamed for triggering various ailments from headaches to skin allergies and fatigue.

To counter this, indoor plants are frequently touted as ‘natural air fresheners’.

However a review of a dozen papers investigating this potential over the last three decades by Professor Waring and colleague Bryan Cummings has shown that potted plants are no better at cleaning the air than their artificial counterparts.

The misconception was fostered by the results of a high-profile test in 1989, which NASA used to suggest that plants could be used to soak up cancer-causing molecules and clean the air contained within space stations.

However, the problem with this experiment — and others like it — is that such were conducted in a sealed chamber in a laboratory setting, the researchers argue.

A contained environment has little in common with a house or office, they said — and these studies were not taken any further.

‘Typical for these studies, a potted plant was placed in a sealed chamber — often with a volume of a cubic metre or smaller — into which a single VOC was injected,’ explained Prof Waring.

‘Its decay was tracked over the course of many hours or days.’ 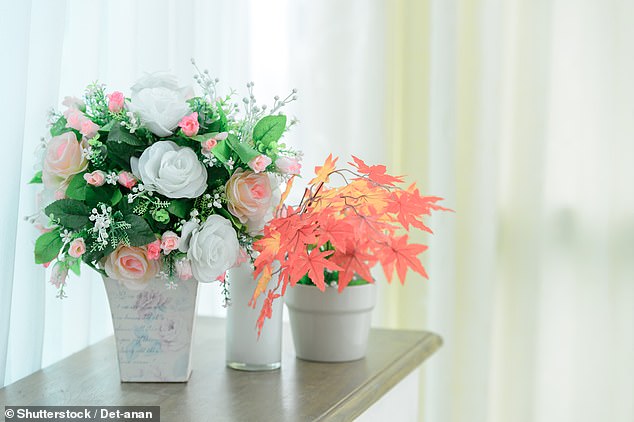 A review of a dozen papers investigating the air purifying potential of plants by Professor Waring and colleague Bryan Cummings has shown that potted plants are no better at cleaning the air than their artificial counterparts, pictured

To determine how plants real in more realistic settings would fare, the research due pooled the results of previous studies to create a measure dubbed the clean air delivery rate, or CADR.

From this, they demonstrate that, in every previous study, the rate at which plants dissipate VOCs in a chamber was orders of magnitude slower than the standard rate of air exchange in a building.

This means that the overall effect of potted plants on indoor air quality is practically inconsequential.

‘The CADR is the standard metric used for scientific study of the impacts of air purifiers on indoor environments,’ said Professor Waring.

‘But many of the researchers conducting these [past] studies were not looking at them from an environmental engineering perspective and did not understand how building air exchange rates interplay with the plants to affect indoor air quality.’

Many did show a slow reduction in the concentration of VOCs over time, however, which explains why people have seized upon the findings to extol the air purifying virtues of plants, he said.

Yet, he noted, it would take between 1–93 plants per square foot to compete with the air cleaning capacity of a building’s air ventilation system — or even just a couple of open windows in a house.

‘This is certainly an example of how scientific findings can be misleading or misinterpreted over time,’ noted Professor Waring.

‘But it’s also a great example of how scientific research should continually re-examine and question findings to get closer to the ground truth of understanding what’s actually happening around us.’

The full findings of the study were published in the Journal of Exposure Science and Environmental Epidemiology.

WHAT IS AIR POLLUTION?