High blood pressure at any age for even a short amount of time can speed up cognitive decline, study finds

Experiencing high blood pressure — or ‘hypertension’ — for even a short amount of time and at any age can speed up cognitive decline, a study has concluded.

Experts from Brazil monitored 7,000 adults — finding that even a short period of hypertension can impact such functions as memory, fluency and concentration.

This decline can be reduced, however, if patients with blood pressure numbers above the normal range of 120/80 mm Hg were given antihypertensive drugs.

In the UK, it is estimated that a quarter of the adult population — some 14.4 million people — have hypertension. Of these, five million are undiagnosed and at risk. 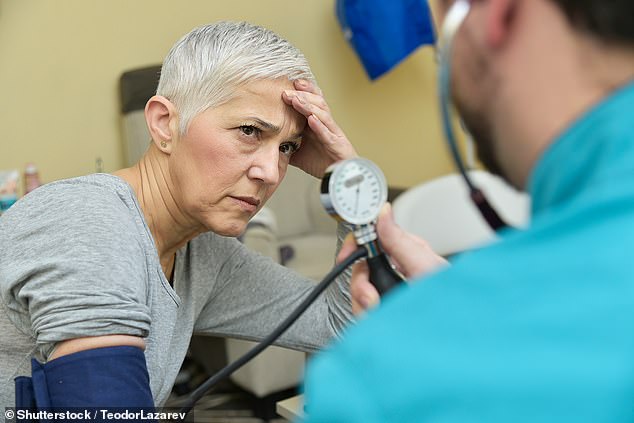 Experiencing high blood pressure — or ‘hypertension’ — for even a short amount of time and at any age can speed up cognitive decline, a study has concluded. Pictured, a blood pressure test

In their study, preventative and social medicine expert Sandhi Barreto and colleagues at the Universidade Federal de Minas Gerais in Belo Horizonte, Brazil followed 7,000 adults — of average age 59 years — for a four-year period.

The team tested the participant’s memories, verbal fluency and so-called executive function — which includes such attributes as attention and concentration.

‘We initially anticipated that the negative effects of hypertension on cognitive function would be more critical when hypertension started at a younger age,’ said Professor Barreto.

‘However, our results show similar accelerated cognitive performance decline whether hypertension started in middle age or at older ages.’

In addition, the team noted that cognitive decline was accelerated in those individuals with uncontrolled, compared with controlled, hypertension.

‘We also found that effectively treating high blood pressure at any age in adulthood could reduce or prevent this acceleration,’ Professor Barreto continued.

‘In addition to other proven benefits of blood pressure control, our results highlight the importance of diagnosing and controlling hypertension in patients of any age to prevent or slow down cognitive decline.’

‘Our results also reinforce the need to maintain lower blood pressure levels throughout life, since even prehypertension levels were associated with cognitive decline.’ 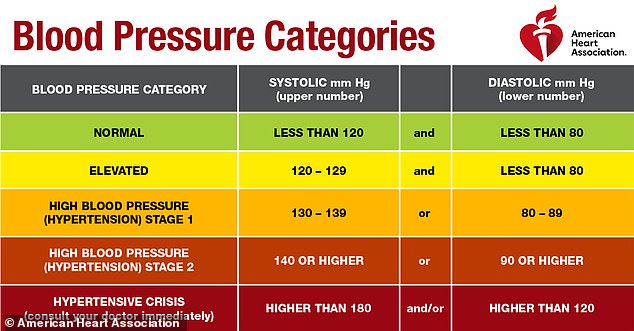 In the UK, it is estimated that a quarter of the adult population — some 14.4 million people — have hypertension. Of these, five million are undiagnosed and at risk. Pictured, the different categories of blood pressure, as detailed by the American Heart Association

‘Although the participants of our study are adults from Brazil, we believe that our findings are applicable to other regions,’ Professor Barreto added.

‘Previous studies have shown that similar unhealthy behaviours and risk factors — including hypertension — are common in the development of cardiovascular diseases in different populations across the globe.’

The full findings of the study were published in the journal Hypertension.

WHAT DOES IT MEAN IF I HAVE HIGH BLOOD PRESSURE?

High blood pressure, or hypertension, rarely has noticeable symptoms. But if untreated, it increases your risk of serious problems such as heart attacks and strokes.

More than one in four adults in the UK have high blood pressure, although many won’t realise it.

Blood pressure is recorded with two numbers. The systolic pressure (higher number) is the force at which your heart pumps blood around your body.

The diastolic pressure (lower number) is the resistance to the blood flow in the blood vessels. They’re both measured in millimetres of mercury (mmHg).

As a general guide:

If your blood pressure is too high, it puts extra strain on your blood vessels, heart and other organs, such as the brain, kidneys and eyes.

Persistent high blood pressure can increase your risk of a number of serious and potentially life-threatening conditions, such as: