Coral reefs that are turning white due to rising sea temperatures, caused by climate change, could be saved by cultivating more heat resistant algae, researchers claim.

Australian researchers removed algae from reefs and exposed them to 88 degree Fahrenheit waters over four years until they developed a greater heat resistance.

They were exposed to similar temperatures as those that caused a mass bleaching of the Great Barrier Reef in 2016 and 2017 – about 5.4F to 7.2F warmer than usual.

The team from the University of Melbourne then put the new algae into coral and found they were able to share their heat resistant properties with the coral. 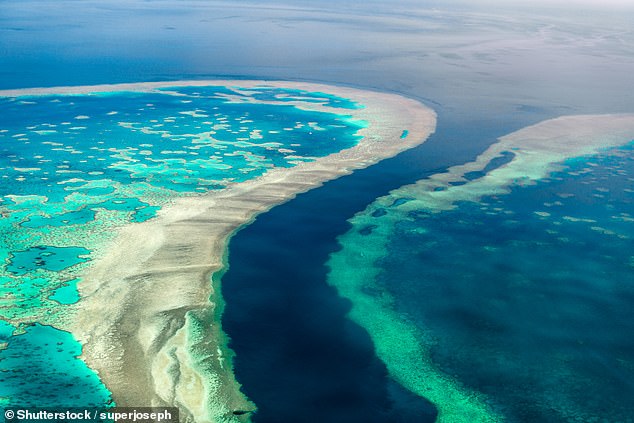 The colourful appearance of a reef is caused by the algae that lives in the tissue of the coral – when the water is too hot that algae is expelled, causing a bleaching.

Researchers discovered that coral with increased heat tolerance have the potential to reduce the impact of reef bleaching caused by marine heatwaves.

The Great Barrier Reef off Australia lost nearly half its corals after a heatwave in 2016 with scientists saying it was caused by mass bleaching from warmer waters.

The team made the coral more tolerant to temperature-induced bleaching by bolstering the heat tolerance of its microalgal symbionts living in the tissue.

Climate change has reduced coral cover, and surviving corals are under pressure as water temperatures rise – increasing the frequency of bleaching events.

‘Our novel approach strengthens the heat resistance of coral by manipulating its microalgae, which is a key factor in the coral’s heat tolerance,’ Dr Buerger said.

The team isolated the microalgae from coral and cultured them in the lab – they then used a technique called  ‘directed evolution’ that involved exposing them to increasingly warmer temperatures over four years.

‘Once the microalgae were reintroduced into coral larvae, the newly established coral-algal symbiosis was more heat tolerant,’ Dr Buerger said.

The microalgae were exposed to temperatures that are comparable to the ocean temperatures during current summer marine heat waves causing coral bleaching on the Great Barrier Reef. 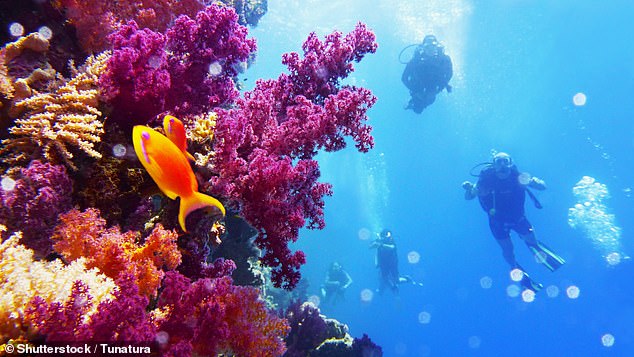 The colourful appearance of a reef is caused by the algae that lives in the tissue of the coral – when the water is too hot that algae is expelled, causing a bleaching

The researchers then unveiled some of the mechanisms responsible for the enhanced coral bleaching tolerance.

‘We found that the heat tolerant microalgae are better at photosynthesis and improve the heat response of the coral animal,’ said Professor Madeleine van Oppen, of AIMS and the University of Melbourne.

‘These exciting findings show that the microalgae and the coral are in direct communication with each other. ‘

The next step is to further test the algal strains in adult colonies across a range of coral species.

‘This breakthrough provides a promising and novel tool to increase the heat tolerance of corals and is a great win for Australian science,’ SynBio FSP Director Associate Professor Claudia Vickers said.

Corals have a symbiotic relationship with a tiny marine algae called ‘zooxanthellae’ that live inside and nourish them.

When sea surface temperatures rise, corals expel the colourful algae. The loss of the algae causes them to bleach and turn white.

This bleached states can last for up to six weeks, and while corals can recover if the temperature drops and the algae return, severely bleached corals die, and become covered by algae.

In either case, this makes it hard to distinguish between healthy corals and dead corals from satellite images.

This bleaching recently killed up to 80 per cent of corals in some areas of the Great Barrier Reef.

Bleaching events of this nature are happening worldwide four times more frequently than they used to.

An aerial view of Australia’s Great Barrier Reef. The corals of the Great Barrier Reef have undergone two successive bleaching events, in 2016 and earlier this year, raising experts’ concerns about the capacity for reefs to survive under global-warming