In 1931, researchers working in southern France unearthed a large seashell at the entrance to a cave. Unremarkable at first glance, it languished for decades in the collections of a nearby natural history museum.

Now, a team has reanalyzed the roughly foot-long conch shell using modern imaging technology. They concluded that the shell had been deliberately chipped and punctured to turn it into a musical instrument. It’s an extremely rare example of a “seashell horn” from the Paleolithic period, the team concluded. And it still works — a musician recently coaxed three notes from the 17,000-year-old shell.

Listen to a Recording of the Seashell Horn

“I needed a lot of air to maintain the sound,” said Jean-Michel Court, who performed the demonstration and is also a musicologist at the University of Toulouse.

The Marsoulas Cave, in the foothills of the French Pyrenees, has long fascinated researchers with its colorful paintings depicting bison, horses and humans. It’s where the enormous tan-colored conch shell was first discovered, an incongruous object that must have been transported from the Atlantic Ocean, over 150 miles away.

Despite its heft, the shell, from the sea snail Charonia lampas, gradually slipped into oblivion. Presumed to be nothing more than a drinking vessel, the conch sat for over 80 years in the Natural History Museum of Toulouse.

Only in 2016 did researchers begin to analyze the shell anew. Artifacts like this conch help paint a picture of how cave dwellers lived, said Carole Fritz, an archaeologist at the University of Toulouse who has been studying the cave and its paintings for over 20 years. “It’s difficult to study cave art without cultural context.”

Dr. Ftiz and her colleagues started by assembling a three-dimensional digital model of the conch. They immediately noticed that some parts of its shell looked peculiar. For starters, a portion of its outer lip had been chipped away. That left behind a smooth edge, quite unlike Charonia lampas, said Gilles Tosello, a prehistorian and visual artist also at the University of Toulouse. “Normally, they’re very irregular.”

The apex of the conch was also broken off, the team found. That’s the most robust part of the shell, and it’s unlikely that such a fracture would have occurred naturally. Indeed, further analysis showed that the shell had been struck repeatedly — and precisely — near its apex. The researchers also noted a brown residue, perhaps remnants of clay or beeswax, around the broken apex.

The mystery deepened when the team used CT scans and a tiny medical camera to examine the inside of the conch. They found a hole, roughly half an inch in diameter, that ran inward from the broken apex and pierced the shell’s interior structure. 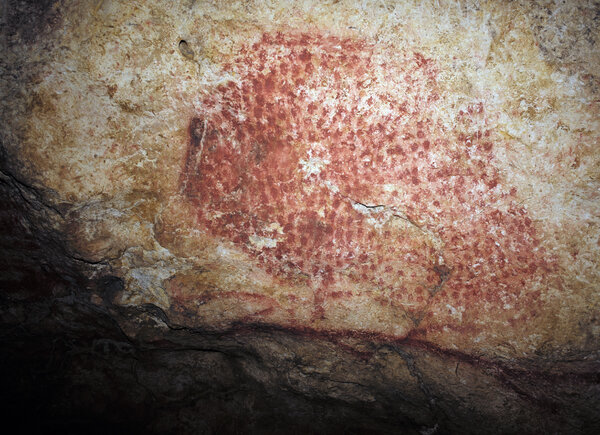 All of these modifications were intentional, the researchers believe. The smoothed outer lip would have made the conch easier to hold, and the broken apex and adjacent hole would have allowed a mouthpiece — possibly the hollow bone of a bird — to be inserted into the shell. The result was a musical instrument, the team concluded in their study, which was published Wednesday in Science Advances.

This shell might have been played during ceremonies or used to summon gatherings, said Julien Tardieu, another Toulouse researcher who studies sound perception. Cave settings tend to amplify sound, said Dr. Tardieu. “Playing this conch in a cave could be very loud and impressive.”

It would also have been a beautiful sight, the researchers suggest, because the conch is decorated with red dots — now faded — that match the markings found on the cave’s walls.

This discovery is believable, said Miriam Kolar, an archaeoacoustician at Amherst College in Massachusetts who studies conch horn shells but was not involved in the research. “There’s compelling evidence that the shell was modified by humans to be a sound-producing instrument.”

While other “seashell horns” have been found in places like New Zealand and Peru, none are as old as this conch.

Dr. Fritz said it was incredible to hear Dr. Court play the conch. Its music hadn’t been heard by human ears for many millenniums, which made the experience particularly moving, she said.

“It was a fantastic moment.”