No, you are almost certainly not going to be hit by a 10-story, 23-ton piece of a rocket hurtling back to Earth.

That said, the chances are not zero. Part of China’s largest rocket, the Long March 5B, is tumbling out of control in orbit after launching a section of the country’s new space station last week. The rocket is expected to fall to Earth in what is called “an uncontrolled re-entry” sometime on Saturday or Sunday.

Whether it splashes harmlessly in the ocean or impacts land where people live, why China’s space program let this happen — again — remains unclear. And given China’s planned schedule of launches, more such uncontrolled rocket re-entries in the years to come are possible.

The country’s space program has executed a series of major achievements in spaceflight in the past six months, including returning rocks from the moon and putting a spacecraft in orbit around Mars. Yet it continues to create danger, however small, for people all over the planet by failing to control the paths of rockets it launches.

“I think it’s negligent of them,” said Jonathan McDowell, an astrophysicist at the Center for Astrophysics in Cambridge, Mass., who tracks the comings and goings of objects in space. “I think it’s irresponsible.”

The piece that will be dropping out of the sky somewhere is the core booster stage of the Long March 5B, which was designed to lift the big, heavy pieces of the space station. For most rockets, the lower stages usually drop back to Earth immediately after launch. Upper stages that reach orbit usually fire the engine again after releasing their payloads, guiding them toward re-entry in an unoccupied area like the middle of an ocean.

Over the past three decades, only China has lifted rocket stages this big to orbit and left them to fall somewhere at random, Dr. McDowell said.

For the Long March 5B booster, that could be anywhere between 41.5 degrees north latitude and 41.5 degrees south latitude. That means Chicago, located a fraction of a degree farther north, is safe, but major cities like New York could be hit by debris.

At present, the Aerospace Corporation, a nonprofit largely financed by the federal government that performs research and analysis, predicts re-entry will occur on Saturday evening Eastern time. If that is accurate, the debris will shower down over the Indian Ocean, off the coast of Australia.

“That looks like it would be a good time to come in,” Ted J. Muelhaupt, principal director of Aerospace’s Center for Orbital and Re-entry Debris Studies.

If the re-entry occurs a little later, there is still little danger to people on the ground as much of that orbit passes over a large swath of the Pacific. But Mr. Muelhaupt noted, “I was talking to someone in Australia who’s not quite so confident about that.”

That prediction is far from certain. It depends, for instance, on the sun. A rise in the intensity of the solar wind — charged particles spewed out by the sun — would puff out Earth’s atmosphere, increasing atmospheric drag on the rocket booster and speeding its fall. The tumbling of the rocket stage also complicates calculations.

The United States Space Command and Russia’s space agency are both tracking the rocket core. The Russian statement noted that the re-entry would not “affect the territory of the Russian Federation.” The Space Command promised regular updates ahead of a potential re-entry.

Because the booster is traveling at 18,000 miles per hour, a change of minutes shifts the debris by hundreds or thousands of miles. It is only a few hours before re-entry that the predictions become more precise.

“It’s an engineering decision based on probabilities,” Dr. McDowell said. He said the Chinese engineers could have designed the trajectory to remain suborbital, falling back to Earth right after launch, or they could have planned an additional engine firing to drop it out of orbit in a way that posed no possible danger.

“It’s not a trivial thing to design something for a deliberate re-entry, but it’s nevertheless something that the world as a whole has moved to because we needed to,” Mr. Muelhaupt said.

China plans many more launches in the coming months as it completes construction of the country’s third space station, called Tiangong, or “heavenly palace.” That will require additional flights of the mammoth rocket and the possibility of more uncontrolled re-entries that people on the ground will watch nervously, even if the risk from any single rocket stage is tiny.

“It’s in the shared interests of all nations to act responsibly in space to ensure the safety, stability, security and long-term sustainability of outer space activities,” Jen Psaki, the White House press secretary, said on Wednesday, adding that the United States hoped to promote “responsible space behaviors.” 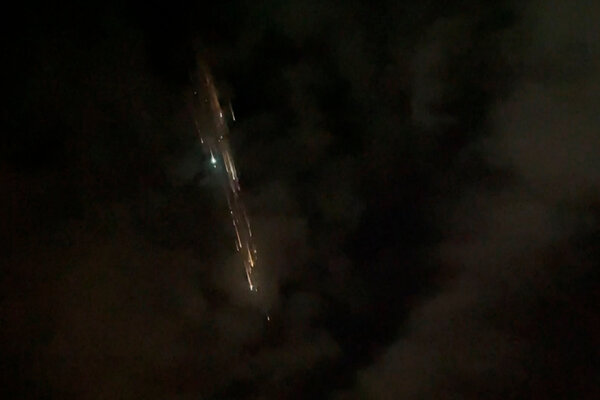 In March, a rocket stage from a SpaceX Falcon 9 lit up the night skies over Seattle and later dropped debris over a farm in Washington State when a planned firing of the engine of the second stage to bring it down safely did not occur as planned.

China, by contrast, has a long history of letting pieces of its space equipment come down where they may.

Rockets from one of China’s principal launch sites, the Xichang Satellite Launch Center in Sichuan Province, routinely fell on rural areas downrange, occasionally causing damage. China has since moved many of its launches, including last week’s, to a new site in Wenchang, a city on Hainan, an island off the southeastern coast. From there rocket stages can fall harmlessly into the sea.

In this case, though, the rocket core that carried the module for China’s new space station also made it into orbit and has since been slowly dragged back toward Earth’s atmosphere.

Last year, the first launch of a Long March 5B rocket lifted a prototype of China’s crewed space capsule. The booster from that rocket also made an uncontrolled re-entry, with some debris raining down on a village in the Ivory Coast.

That prompted a rebuke from the administrator of NASA at the time, Jim Bridenstine.

“It could have been extremely dangerous,” he said. “We’re really fortunate in the sense that it doesn’t appear to have hurt anybody.”

China’s first space station, called Tiangong-1 and launched in 2011, also fell back to Earth in an uncontrolled descent in 2018 before ultimately crashing harmlessly in the South Pacific. The following year, China’s space administration successfully steered the second station out of orbit and into the Pacific. The booster stage this time is by itself more than twice as massive as the first two Tiangong space stations.

The United States, too, struggled during its first space station’s return to Earth. Skylab, which operated in 1973 and 1974, broke up as NASA scientists tried to guide its descent in 1979. The 77-ton station mostly broke up over the Indian Ocean, but debris scattered across Western Australia. President Carter apologized.

In 2011, the Upper Atmosphere Research Satellite, or UARS, a defunct NASA satellite about the size of a school bus, also fell back to Earth. NASA calculated a 1-in-3,200 chance that UARS, a bit smaller than Tiangong-1 or Tiangong-2, would hurt anyone on the ground.

Dr. McDowell said he thought the threat posed by the Long March 5B booster debris was likely comparable — unlikely but high enough to be of concern. Because the Chinese have not provided design details of the rocket, it is hard to predict how much material will reach the surface.

Mr. Muelhaupt said it could be 10 tons spread over hundreds of miles. “Think about three pickup trucks’ worth of debris,” he said.

The largest cascade of space debris onto the surface occurred when the space shuttle Columbia disintegrated over Texas in 2003 as it re-entered the atmosphere en route to a landing in Florida. The seven astronauts aboard died, but no one on the ground was hurt as 85,000 pounds of debris fell on sparsely populated areas. But had the disaster occurred a few minutes earlier, heavy pieces of the spacecraft like the engines could have hit the ground near Dallas at hundreds of miles per hour.

China’s new space station is intended as an alternative to the International Space Station. The current orbiting outpost, jointly built by NASA, Russia and other partners, has kept humans continually in space for more than two decades now. But Chinese astronauts have been excluded by a U.S. law prohibiting cooperation with China in space.

After the launch of what will be the station’s main living quarters on April 29, China’s leader, Xi Jinping, called it “an important pilot project in the building of a powerful nation in both technology and space,” according to the state television network, CCTV.

Chinese space officials have not publicly addressed the uncontrolled re-entry since then, despite attention and worry around the world.

The Global Times, a newspaper controlled by the Chinese Communist Party, on Wednesday quoted scientists and experts saying that there was little danger and that the space administration had “carefully considered” the prospect of falling debris.

More launches of the Long March 5B are coming, and unless there is a change to how China operates it, the odds that someone will be hurt by a piece of a falling booster will grow.

Last week’s launch was the first of 11 planned over the next year and a half to erect the Tiangong. In June, three astronauts could fly to the station aboard a Shenzhou spacecraft, which would be China’s first crewed mission since 2016. If all goes as planned, the space station will be fully up and running by the end of 2022.