A surprise announcement at this year’s UN General Assembly has transformed the politics of cutting carbon, says the BBC’s chief environment correspondent, Justin Rowlatt. As the meeting of the so-called “global parliament” comes to an end, he asks whether it might just signal the beginning of a global rush to decarbonise.

You probably missed the most important announcement on tackling climate change in years.

It was made at the UN General Assembly.

It wasn’t today’s big commitment to protect biodiversity or anything to do with the discussion about how to tackle the coronavirus pandemic – vitally important though these issues are.

No, the key moment came on Tuesday last week when the Chinese President, Xi Jinping, announced that China would cut emissions to net zero by 2060.

The commitment is a huge deal on its own, but I believe his promise marks something even more significant: China may have fired the starting gun on what will become a global race to eliminate fossil fuels.

I’ll get to that later, first off Xi’s pledge.

It is fair to say environmentalists were stunned by Xi’s surprise pledge.

Let’s be clear what it means: China, the most polluting nation on earth – responsible for around 28% of global greenhouse gas emissions – is saying it is going cut that back to virtually zero within 40 years.

“Enormously important” is how Todd Stern – the man President Obama put in charge of climate negotiations – described it to me. 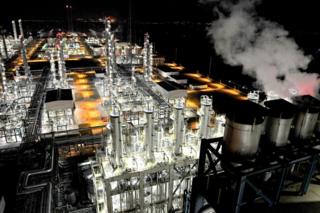 “A massive move” and “a happy, happy surprise” was Li Yan’s take: she’s the head of Greenpeace in China.

The commitment is so significant because China has never promised anything near as bold as this on climate before.

And it comes after the European Union committed billions of euros towards a green stimulus package and – only last week – toughened up its own 2030 climate targets.

It therefore raises the prospect of a carbon-cutting coalition of Europe and China covering more than a third of world emissions.

Why good news on climate is so rare

International negotiations to reduce carbon emissions all too often end in ugly squabbles.

With good reason, says Todd Stern, who was instrumental in making the most successful climate agreement to date: the Paris Agreement of 2015.

The problem is cutting carbon has always been regarded as an expensive chore.

The effort to control climate change impacts virtually every element of a country’s economy, says Mr Stern, “so countries have traditionally been nervous about what they’re going to be asked to do.”

Indeed, Paris was the first time the world actually agreed that all nations needed to do their bit to reduce greenhouse gas emissions.

And then, of course, the deal was promptly dumped by US President Donald Trump after he was elected the following year.

But even before the US said it wanted out, nobody involved in the negotiations thought the goals laid down in Paris were anywhere near strong enough to meet the objective of keeping the global temperature rise well below 2 degrees of pre-industrial levels.

The idea was that every five years countries would be asked to come up with more ambitious targets, ramping up their efforts.

The conference at which those new targets were to be discussed was to be held in Glasgow this November. Thanks to the pandemic it will now be held in November next year.

Many observers had expected China to keep its powder dry and produce any ambitious new targets with a flourish at a crucial moment in those negotiations.

President Xi definitely had an eye on global politics.

His address was a very deliberate contrast to that of President Trump a couple of days earlier.

Where Trump blames China for the world’s problems, Xi calls for global cooperation and highlights all the good work China has been doing.

He called on the world to work together, investing in a green recovery to lift the global economy from the post-Covid doldrums.

“We are living in an interconnected global village with a common stake,” says Xi.

“All countries are closely connected and we share a common future. No country can gain from others’ difficulties or maintain stability by taking advantage of others’ troubles.”

“we should embrace the vision of a community with a shared future in which everyone is bound together,” he continues.

It is also presumably no coincidence that Xi’s announcement came weeks before the US Presidential election, and just as the terrible fires on the west coast and a series of fierce storms in the east made climate an issue in the polls for the first time.

And a cynic might think his reassuring words were partly a ploy to reingratiate China with the climate-conscious Europeans, and isolate a climate-sceptic US President. It came straight after a virtual bilateral summit between Beijing and Brussels.

A global race to clean power?

But there is a much more important broader context for his announcement: the fact that the collapsing cost of clean energy is completely changing the calculus of decarbonisation.

Renewables are already often cheaper than fossil fuel power in many parts of the world and, if China and the EU really ramp up their investments in wind, solar and batteries in the next few years, prices are likely to fall even further.

The Europeans have been quite open that their strategy is to entice other countries to join them by driving down the cost of renewables globally. Alongside this carrot, they also plan to wield a stick – a tax on the imports of countries that emit too much carbon.

Meanwhile, President Xi’s 2060 pledge was notably unconditional – China will move ahead whether or not other countries chose to follow.

This is a complete turnaround from past negotiations, when everyone’s fear was that they might end up incurring the cost of decarbonising their own economy, while others did nothing but still enjoyed the climate change fruits of their labour.

How things have changed. Very soon, renewable power is likely to be the cheapest and therefore almost certainly the most profitable choice in large parts of the world.

Think what this means: investors won’t need to be bullied by green activists into doing the right thing, they will just follow the money.

Why invest in new oil wells or coal power stations that will become obsolete before they can repay themselves over their 20-30-year life? Why carry carbon risk in their portfolios at all?

The change of appetite on financial markets has become ever more obvious over the last decade. This year alone, Tesla’s rocketing share price has made it the world’s most valuable car company.

Meanwhile, the share price of Exxon – once the world’s most valuable company of any kind – fell so far that it just got booted out of the Dow Jones Industrial Average of major US corporations.

And this is where the idea of a race comes in.

Countries – and companies – may soon rush to decarbonise as they see opportunities to make profits in what will be an enormous new market.

President Xi is well aware of his country’s leading position in the market for clean energy – investing in renewables has been a priority for China for many years.

It is already the world’s biggest manufacturer of solar panels and wind, it makes more electric cars and buses than anyone else and has also become the international hub for battery production.

“It is going to keep on driving down the prices, so that everybody can get onto this parade, as it were, and go along,” says Rachel Kyte, Dean of the Fletcher School at Tufts University, in Medford, Massachusetts, and a former adviser to the UN Secretary General on sustainable energy.

So, it looks like Xi has judged that the economics of clean energy mean that decarbonising is now the most sensible choice for the Chinese economy as well as for the world’s climate.

He is not alone. Look at how oil companies like BP and Shell are saying they want to move away from the black stuff and into clean energy.

So can we stop worrying about climate change?

The idea of a global race to decarbonise is a thrilling new prospect for anyone interested in limiting climate change, but I am sorry to say there are still many hurdles along the way.

First off, Mr Xi’s did not give any details of how his country would achieve his carbon-neutral target.

Remember, China is by far the biggest consumer of coal in the world, hoovering up about half of the global supply.

It is also the world’s second biggest user of oil – after the US.

Across its economy, some 85% of its power comes from fossil fuels with 15% from low carbon sources.

Those ratios will need to be turned on their head to have any chance of meeting the net zero pledge.

That will take eye-popping investment in wind, solar and nuclear power.

But all Xi said at the UN about how it would get to its 2060 goal was that China would peak its emissions of greenhouse gases “before 2030” – little change from China’s previous promise that the peak would come “around” 2030.

Li Yan of Greenpeace says the acid test will be whether a raft of new coal plants proposed by provincial authorities are approved.

We’ll see whether they get the go-head – and how aggressive the investment in clean energy is – in a few months when the details of China’s next five-year plan are published.

Another reason for optimism

So even as the economics tilts in favour of renewables the task of decarbonisation is still enormous.

Meanwhile, the effects of climate change will only accelerate.

But there is another reason for optimism.

The US is the world’s biggest economy and the second biggest producer of greenhouse gases, and is therefore essential to any effort to tackle climate change.

Under Donald Trump it has steered clear of carbon-cutting commitments.

But his challenger, Joe Biden, has said he will re-join the Paris accord, and has promised a $2 trillion green recovery plan for the US, which would aim to slash emissions and tackle the effects of climate change.

That holds out the promise of the world’s three largest economies, responsible for nearly half of all emissions, all making a serious effort to cut carbon.

Once half the world is on-board with the project it is hard to see how the rest could hold out.

So – and this isn’t something we often say about climate change – there are powerful new reasons for optimism.

I’ve travelled all over the world for the BBC and seen evidence of environmental damage and climate change everywhere. It’s the biggest challenge humanity has ever faced. Tackling it means changing how we do virtually everything. We are right to be anxious and afraid at the prospect, but I reckon we should also see this as a thrilling story of exploration, and I’m delighted to have been given the chance of a ringside seat as chief environment correspondent.