Just in time for Halloween! European Southern Observatory shares a spooky photo showing the ghostly remains of a gigantic star that exploded 11,000 years ago

The European Southern Observatory (ESO) has released an image of the ghostly remains of a star that exploded 11,000 years ago, just in time for Halloween.

The event is known as the Vela supernova, and the aftermath has been photographed by the Very Large Telescope (VLT) at the Paranal Observatory in Chile.

Shockwaves caused during the supernova moved through the surrounding gas, compressing it and creating intricate thread-like structures.

These gaseous tendrils were also heated by the vast amount of energy that was also released in the explosion, causing them to shine brightly.

NASA described the Vela supernova remnant as an ‘expanding debris cloud from the death explosion of a massive star.’ 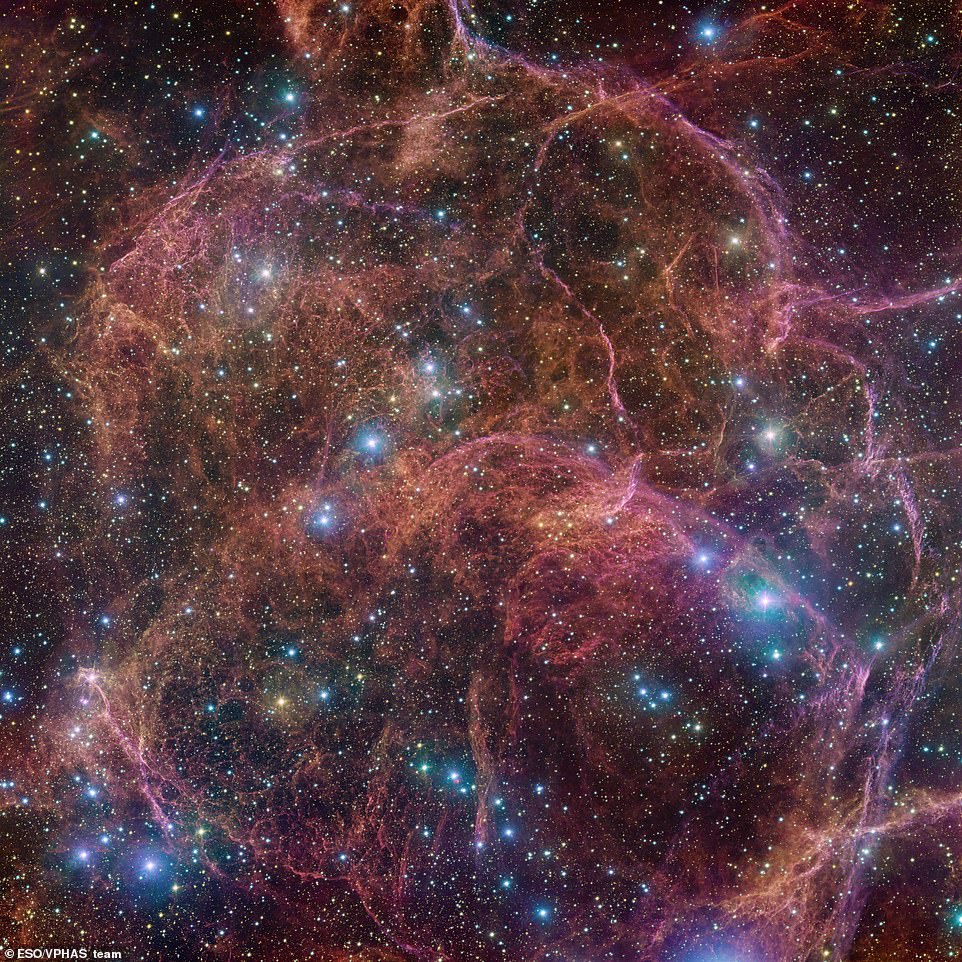 A view of the Vela supernova remnant – orange and pink clouds that make up what remains after the explosive death of a massive star. This image consists of 554 million pixels, and is a combined mosaic image of observations taken with the 268-million-pixel OmegaCAM camera at the VLT Survey Telescope, hosted at ESO’s Paranal Observatory

The Vela supernova remnant is the structure resulting from the explosion of a star in the southern constellation Vela.

A neutron star remains that spins more than ten times per second , and is known as the ‘Vela pulsar’ as it emits vast amounts of radiation as it rotates.

Its discovery by astronomers at the University of Sydney in 1968 was direct observational evidence that supernovae form neutron stars.

A supernova occurs when a star explodes at the end of its life, shooting debris and particles into space.

Eventually, the core becomes so heavy it can’t stand its own gravitational force and the core collapses, resulting in a giant explosion.

Every atom in the outer parts of the star is heated to well over one million degrees and ejected into the surrounding gas, producing spectacular filaments.

The explosion also leaves behind an ultra-dense, collapsed core made of neutrons – the result of remaining protons and electrons being forced together.

The rotation of the original star also increases dramatically during collapse, and the resulting neutron star can be left spinning many times a second.

As it emits radio waves, X-rays and other radiation through space while it spins, it is known as a ‘pulsar’.

‘Since neutron stars began their existence as stars, they are found scattered throughout the galaxy in the same places where we find stars,’ NASA explains.

‘And like stars, they can be found by themselves or in binary systems with a companion.’

They are made of matter much more densely packed than normal which give the entire star a density comparable to an atomic nucleus.

They also have extremely strong magnetic fields and give off radiation in a cone-shaped beam which sweeps across the sky as the star rotates, like the light from a lighthouse.

When the beam sweeps over Earth, it becomes visible, producing light that cycles every few seconds to just a few milliseconds.

The pulsar of the Vela remnant – named after the southern constellation Vela (‘The Sails’) – is placed outside of this image to the upper left, and is spinning more than 10 times per second.

While the location of the Vela supernova remnant is 800 light-years away from Earth, it is one of the closest known to us.

The image is made of 554 million pixels, and shows an area that would fit nine full moons.

It is a mosaic of observations taken with the wide-field camera OmegaCAM of the VLT Survey Telescope.

The 268-million-pixel camera can take images through several filters that let through light of different colours.

In this particular image of the Vela remnant, four different filters were used, represented here by a combination of magenta, blue, green and red.

The VST uses a 2.6-metre mirror to survey the night sky in visible light, making it one of the largest telescopes to do so.

This image was generated during the VST Photometric Hα Survey of the Southern Galactic Plane and Bulge (VPHAS+), which has been going on for over seven years.

This survey has mapped a considerable portion of our home galaxy allowing astronomers to better understand how stars form, evolve and eventually die. 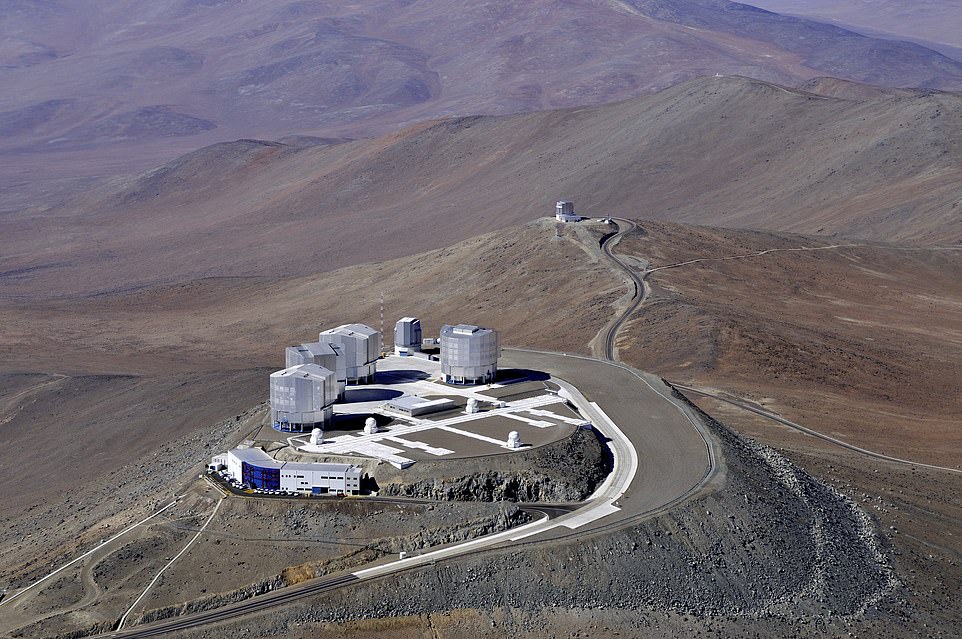 Bird’s eye view of the Very Large Telescope in the Atacama Desert in northern Chile. The site hosts four 8.2-metre Unit Telescopes, four 1.8-metre Auxiliary Telescopes, the VLT Survey Telescope, and the 4.1-metre Visible and Infrared Survey Telescope for Astronomy, seen in the distance on the next mountain peak over from the main platform. The Observatory Control Room building can also be seen on the main platform’s front edge 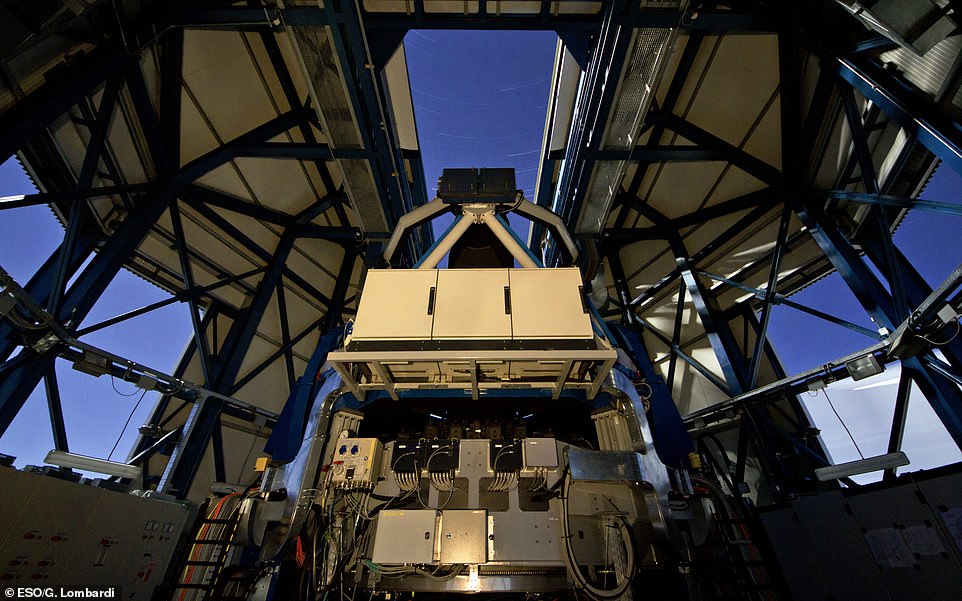 The VLT Survey Telescope (VST) at Cerro Paranal. The VST is a state-of-the-art 2.6-metre telescope equipped with OmegaCAM, a monster 268 megapixel CCD camera with a field of view four times the area of the full Moon

The European Southern Observatory (ESO) built the most powerful telescope ever made in the Atacama Desert of northern Chile.

It also observed the afterglow of the furthest known Gamma Ray Burst.