The real-life Day After Tomorrow: The Gulf Stream is at its weakest for over 1,000 YEARS due to climate change – and could cause temperatures in Britain to plummet 18°F if it collapses, study warns

The Gulf Stream is at its weakest in a millennia, approaching a ‘tipping point’ where it could collapse and push temperatures in Europe down by 18F, a new study has warned.

Human caused climate change is responsible for changes bringing the current – also known as the Atlantic Meridional Overturning Circulation (AMOC) – to the brink of collapse, according to the Potsdam Institute for Climate Impact Research, Germany.

The Atlantic Ocean circulation system is responsible for the mild temperatures in the UK and Europe, moving heat from the tropics to the northern hemisphere.

Its underlying system has become destabilised, researchers discovered, which could eventually result in it switching to a ‘weak mode’ and lead to its collapse.

It is currently only approaching ‘tipping point’, but when it happens warm water won’t be moved up through western Europe, causing freezing cold winters.

Study authors can’t say when it will happen as there is still the chance to stop it, but it would require a dramatic reduction in carbon emissions.

‘At the moment we most likely haven’t already crossed the critical threshold,’ study author Niklas Boers told MailOnline, adding ‘every single gram of CO2 we don’t emit into the atmosphere will reduce the probability that we’ll cross the threshold’. 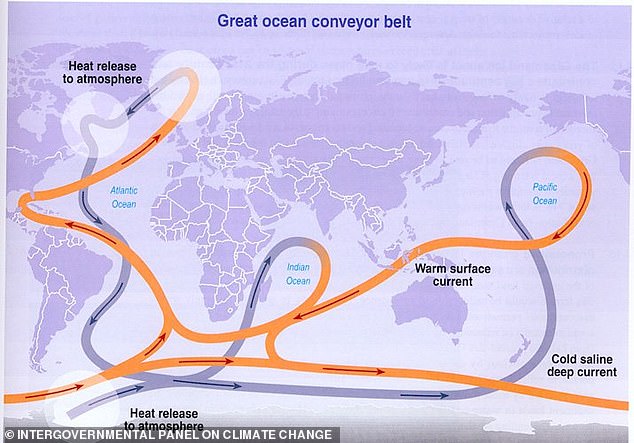 The Gulf Stream is at its weakest in a millennia, approaching a ‘tipping point’ where it could collapse and push temperatures in Europe down by 18F, study reveals 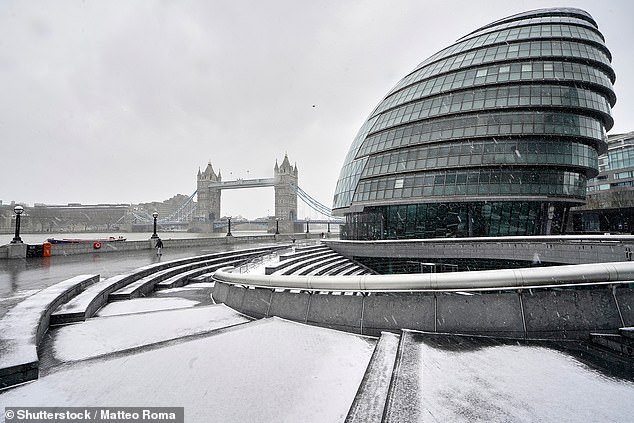 It is currently only approaching ‘tipping point’, but when it happens warm water won’t be moved up through western Europe, causing freezing cold winters

WHY ARE OCEAN CURRENTS SO IMPORTANT?

Ocean currents play a critical role in regulating the planet.

They are the continuous, predictable, directional movement of sea water by gravity, wind, and water density.

Water in the ocean moves in two directions – horizontally and vertically.

Horizontal movements are referred to as currents, while vertical changes are called upwellings or downwellings.

Slower circulation in the North Atlantic can yield profound change.

This is on both the North American and European climate but also on African and Asian summer monsoon rainfall.

This is through its effect on sea surface temperature, hydrological cycle, atmospheric circulation and variation in the intertropical convergence zone.

If the Gulf Stream, moving warm water up from the tropics, collapses  Europe would be plunged into a deep freeze.

Disaster movie The Day After Tomorrow was based on the collapse of AMOC, the phenomenon that drives the gulf stream, carrying warm surface water from the equator and return it cold back tot he bottom of the Atlantic.

The AMOC is known to be at its weakest in more than 1,000 years based on an earlier study, and this new research explored whether it was due to an underlying stability.

A collapse was previously considered unlikely under current global warming levels, with the system slowly weakening over the last century.

‘The loss of dynamical stability would imply that the AMOC has approached its critical threshold beyond which an abrupt and potentially irreversible transition to the weak mode could occur,’ he explained.

The analysis was based on ‘fingerprints’ the AMOC leaves in surface temperature and salinity patterns.

It showed a ‘critical threshold’ is being reached beyond which the system may collapse, although we haven’t reached that point yet.

The finding was both alarming and surprising, as the scenario was expected to occur at global warming levels much higher than the current increases.

‘Most evidence suggests the recent AMOC weakening is caused directly by the warming of the northern Atlantic ocean,’ said Dr Boers.

‘But according to our understanding, this would be unlikely to lead to an abrupt state transition.

‘Stability loss that could result in such a transition would be expected following the inflow of substantial amounts of freshwater into the North Atlantic in response to melting of the Greenland ice sheet, melting Arctic sea ice and an overall enhanced precipitation and river runoff.’

Fresh water from melting ice – especially in Greenland – has accelerated in the last few decades, with regional destabilisation of the Greenland Ice sheet already detected.

Dr Boers added: ‘To understand this in-depth we need to find ways to improve the representation of the AMOC and polar ice sheets in comprehensive Earth system models and to better constrain their projections.

‘I hope that the results presented here will help with that.’

He said that while it is weakening, it hasn’t reached the tipping point yet, and this study simply shows that the AMOC is still in its strong circulation mode. 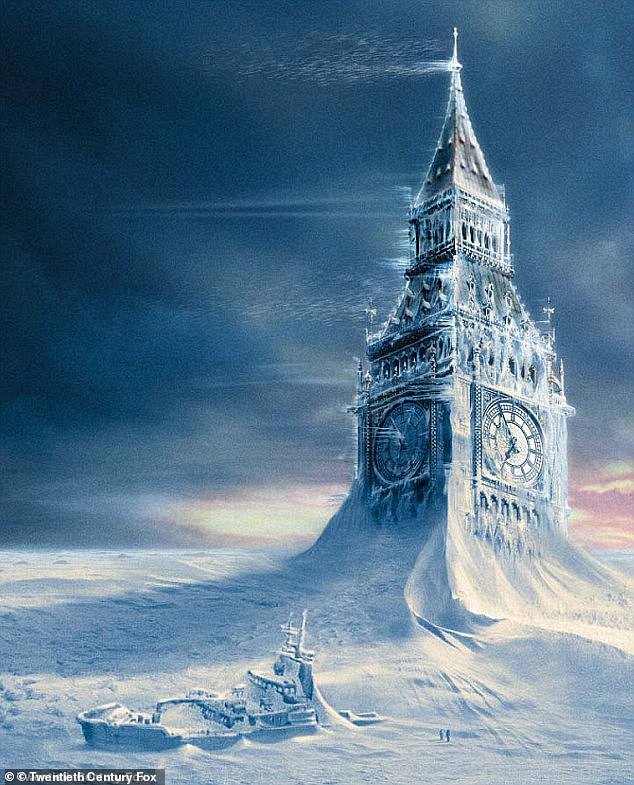 Disaster movie The Day After Tomorrow was based on the collapse of AMOC, the phenomenon that drives the gulf stream, carrying warm surface water from the equator and return it cold back tot he bottom of the Atlantic

The Atlantic Meridional Overturning Circulation (AMOC) is a large system of ocean currents.

They carry warm water from tropics northwards into the North Atlantic.

As warm water flows northwards it cools and some evaporation occurs, which increases the amount of salt.

Low temperature and a high salt make the water denser, and this dense water sinks deep into the ocean.

Eventually, it gets pulled back to the surface and warms in a process called ‘upwelling’ and the circulation is complete.

This global process makes sure that the world’s oceans are continually mixed, and that heat and energy are distributed around the earth.

This, in turn, contributes to the climate we experience today.

‘The weak circulation mode is much much weaker than the present day mode, even if that has slowed down,’ Dr Boers told MailOnline.

The team discovered that the decline in strength over the last century is associated with a loss of stability, rather than just a linear change in its mean state.

‘So we have been moving closer to the critical threshold, but we certainly haven’t moved into the weak circulation mode already,’ he said.

‘The concern is that we have moved closer to the critical point where a collapse to the weak mode can occur,’ adding it would have dramatic consequences in terms of cooling Europe by up to 18F and impact on tropical monsoon systems.

‘I reveal significant signs of stability loss, but it’s hard to estimate from that where exactly the critical threshold is,’ he told MailOnline.

‘Then there are still uncertainties in the exact value of freshwater inflow at which the AMOC will tip over to the weak mode.

‘What can be said for sure is that we haven’t expected to see such clear signs of stability loss at this point already. Once we reach the critical point, the AMOC will likely collapse within a few decades.’

It isn’t beyond hope though, as Dr Boers told MailOnline ‘every single gram of CO2 that we don’t emit to the atmosphere will reduce the probability that we’ll eventually cross the threshold and thus trigger the AMOC collapse.’

‘This is certain even if the numbers themselves are uncertain,’ he added. 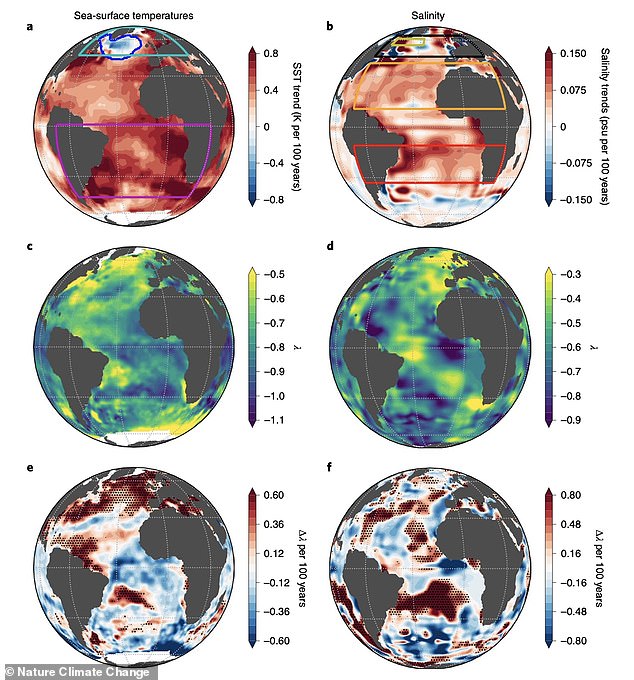 Researchers explored salinity fingerprints linked to changes in the Gulf Stream over the past 1,000 years to calculate the strength of the steam itself and risk of collapse

David Alexander, Professor of Risk and Disaster Reduction at University College London, not involved in the research, said Britain is unprepared for a major disaster.

‘Britain does not have a proper civil protection system,’ he told MailOnline, with no national emergency operations centre, inadequate training an an ‘excessive reliance on military assistance,’ he said.

He added that ‘almost all the vital areas have been starved of resources, there are no representatives of disaster science on SAGE and volunteer organisations are not properly incorporated into the system.’

‘There is a failure to learn from other countries’ good practices and a strong desire to emulate the United States, which is possibly the worst example to follow.’

‘Despite the presence of an enormous well of talent and expertise in Britain, almost all disasters over the last 35 years have been badly managed.’

The study is part of the EU’s TiPES project which is investigating tipping points in the Earth system and is published in the journal Nature Climate Change.

What would the world look like if the Gulf stream collapsed?

If the AMOC was to collapse, far less heat would reach western Europe and the region would be plunged into very severe winters, the kind of scenario depicted in an extreme fashion in the movie The Day After Tomorrow.

Until the 1800s, it was relatively stable but the current declined after the so-called ‘Little Ice Age’ ended in 1850.

Temperatures dropped low enough that the River Thames completely froze over and records show Londoners crossing the waterway on foot.

The last shutdown was probably at the end of the last Ice Age, 12,000 years ago, and it prompted a temperature drop of 5°C to 10°C in western Europe.

In the event of another collapse, not only would European winters become much colder but summer droughts, storms and heatwaves would likely become more common.

Sea levels could rise up to nearly 20 inches around the North Atlantic Basin, which surrounds the eastern US coast.

This would eventually push people living along the coast further inland to escape flooding. A widespread collapse of deep-sea eco-systems would occur.

In the US, Florida would be particularly badly affected as the flow of water northwards would be halted, seeing it collect on the state’s shoreline.

A study published last year looked at how the cessation of the AMOC may impact the UK specifically. 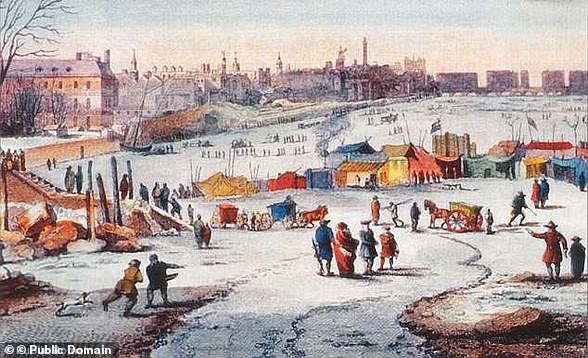 The Little Ice Age, a centuries-long cold period that lasted until about 1850. Experts believe that as the North Atlantic began to warm near the end of the Little Ice Age, freshwater disrupted the system. Pictured is Thames Frost Fair, 1683–84, by Thomas Wyke

University of Exeter researchers made a computer model and found that by 2080 the weather would be 3.4°C colder than it was last year.

Rainfall during the growing season is expected to drop by 123mm, they added.

The effects would be felt not in Europe and the United States, with forecasts also projecting that the collapse of the AMOC would also increase drought in the Sahel in Africa.