A young sea turtle washed up dead on a Bali beach was filled with large pieces of plastic when she died.

Images of the animal’s innards reveal pieces of plastic clogging up the intestines, blocking food and possibly poisoning the creature.

Surfers on the beach found the animal and exerts later inspected its remains when they discovered the gruesome haul. 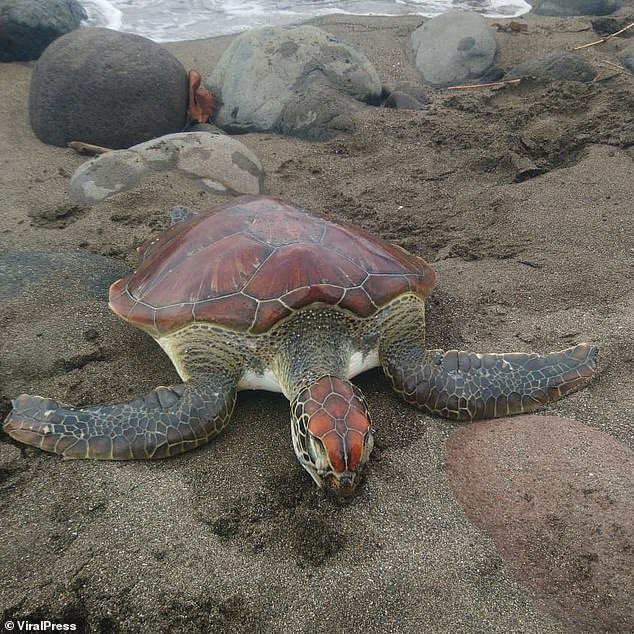 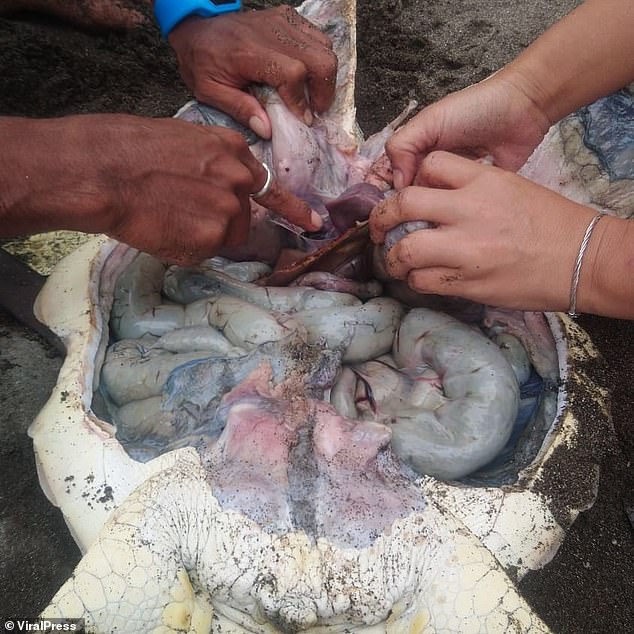 Images of the animal’s innards reveal pieces of plastic clogging up the intestines, blocking food and possibly poisoning the creature 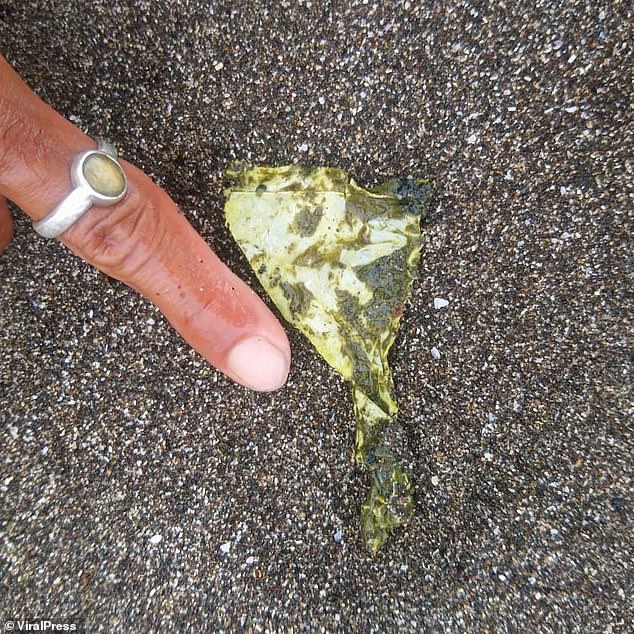 The scourge of human litter and plastic waste poses a huge threat to marine wildlife.

Animals often mistake it for food and accidentally eat the floating waste.

The lifeless creatures washed up on the shore on February 1 and marine workers checked the creatures digestive system.

Runa Widemann from The Meadow Medewi Organization said that the young turtle had swallowed at least one plastic bag which had blocked her internal organs.

She said: ‘The turtle was already dead and we decided to open her up to see if we could find the cause of death.’

Ms Widermann said the animal looked in good health except for the presence of plastic, indicating it played a key role in the animal’s death.

‘Everything looked normal and her intestines were full of food, but when they went close to her bowels, pieces of plastic were stuck, blocking anything from getting out,’ she adds.

The turtle may have died from internal poisoning because of this, the experts believe.

Ms Widermann said that the incident was coordinated to the local authorities.

She added: ‘It was so sad to see this in real life and a solid reminder that we have a big job to do.’

HOW DOES PLASTIC KILL TURTLES?

Sea turtles live in the ocean and feed on vegetation and algae floating in the waters.

Unfortunately, many pieces of litter discarded by humans pollute these waters and resemble food.

The sea turtles mistake them for nutrition and consume them.

This plastic then enters their digestive tract and causes havoc to the animal’s innards.

A study in 2018 found eating a single piece of plastic increases the turtles chance of death.

Researchers found there it caused a one in five chance of death – rising to 50 per cent for 14 pieces.

Turtles have a digestive tract which means they are physically incapable of regurgitation.

Once something has been eaten, it stays in the animal unless it can be defecated.

Once inside the animal, if a piece of plastic covers an organ or blocks a key canal, it can create a fatal blockage.