‘Green prescriptions’ don’t work: Spending time in nature is only good for people’s mental health if they feel it is their choice, study claims

Taking a stroll in nature is good for people struggling with their mental health, but its benefits are hindered if a person is instructed to do so by their doctor or loved ones.

So-called ‘green prescriptions’ are becoming increasingly popular as GPs use Mother Nature to help people struggling with depression, anxiety and other issues.

But a study by the University of Exeter found instructions to go outdoors undermines the benefits compared to a person motivating themself to spend time alfresco.

The findings reveal the more pressure people feel from friends or other well wishers to visit nature, the less inclined they are to do so and the more anxious they feel. 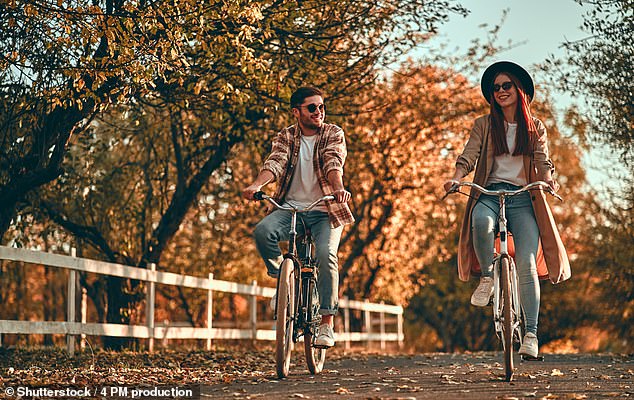 So-called ‘green prescriptions’ are becoming increasingly popular as doctors use Mother Nature to help people struggling with depression, anxiety and other issues. But a study by the University of Exeter found instructions to go outdoors undermines the benefits compared to a person motivating themself to spend time alfresco (stock)

In the new study, researchers investigated whether contact with nature has the potential to help people manage their mental health symptoms.

They say their discovery demonstrates nature is ‘no silver bullet’ and needs to be recommended with sensitivity as well as used alongside existing treatment options.

Study lead author Dr Michelle Tester-Jones, of the University of Exeter, said: ‘These findings are consistent with wider research that suggests that urban natural environments provide spaces for people to relax and recover from stress.

‘However, they also demonstrate that healthcare practitioners and loved ones should be sensitive when recommending time in nature for people who have depression and anxiety.

‘It could be helpful to encourage them to spend more time in places that people already enjoy visiting so they feel comfortable and can make the most of the experience.’

In the study, researchers discovered people with depression visit nature just as often as people with no mental health conditions.

People with anxiety were already spending much more time in nature than those without the condition, the data also showed.

Research co-ordinator Dr Mathew White, also of the University of Exeter, said: ‘We had no idea just how much people with depression and anxiety were already using natural settings to help alleviate symptoms and manage their conditions.’

The team collected data from more than 18,000 people in 18 different countries, as part of the EU Horizons 2020 funded BlueHealth project.

Dr Matilda van den Bosch, assistant professor at The University of British Columbia in Canada, said: ‘For green prescriptions, like with any intervention, it is important to avoid pressure to achieve compliance with the treatment.

‘Nature cannot be forced on anyone, but must be provided at the individual’s own pace and will.’

The study found people with depression were already visiting nature as frequently as people with no mental health issues, while people with anxiety were visiting significantly more often.

The findings were published in the journal Scientific Reports.

Doctors have been told to prescribe time in green spaces to boost patients’ physical and mental health under proposals to ease the burden on the NHS.

In a speech in July, Environment Secretary George Eustice said that instead of simply handing out pills, GPs and other health professionals could start issuing ‘green prescriptions’ telling patients to visit Britain’s beauty spots.

Under the £4million scheme, doctors will also be able to urge people to do gardening, join cycling and walking groups, take part in outdoor ‘green gym’ sessions and even help plant trees in their local area.

The plan could also be used to send vulnerable people – such as care home residents – on coach trips to Britain’s national parks and areas of outstanding natural beauty.

It is hoped that the scheme will boost the country’s mental health, help tackle the obesity problem and also help coronavirus sufferers to recover.

In an online speech to the Green Alliance, Mr Eustice pledged that nature will be at the heart of the efforts to reboot the economy following the pandemic.

He set out Government plans to boost the environment after Brexit, while also warning of the negative impacts that European Union environmental law has had on protecting nature.

And he announced plans to ‘simplify’ the environmental impact assessments some developments have to carry out, in the wake of Boris Johnson’s promise to ‘build, build, build’ out of the economic crisis.

But it is the £4million pot to prescribe time in nature which is set to be the most eye-catching.

The money will pay for pilot schemes to ‘help us to understand how best to connect people, especially those hit hardest by Covid-19, with the beautiful British countryside’.